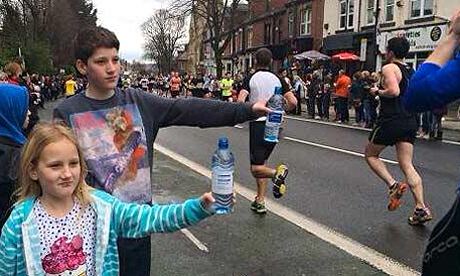 Andrew McFetrich was one of those disappointed athletes who took part in yesterdays Sheffield Half Marathon (or should we call it ‘Watergate’? ). Despite a last minute decision by organisers to cancel the race due to a problem with the delivery of water, Andrew joined the throng of 5,000 ‘Rebel Runners’ to complete the course. This was Andrews first run in the black & white of TBH and & he gives his account of the event in his first Race Report for the club.

A 9:00am start for a half marathon required a certain amount of preparation. Travelling down the night before, bribing a friend to let me stay at theirs, packing my bag three times to make sure I hadn’t forgotten anything. Unfortunately, the organisers of Sheffield Half Marathon didn’t seem to put in as much effort!

Up at 6am, with the usual crumpets and honey, carb drink and energy bar, I set off to the Don Valley bowl for the Sheffield Half Marathon. Despite the cities famous hills, the route was mainly flat, travelling along the valley floor from the old industrial heart land, through to Ecclesall Road, where the posh students live (it wasn’t that way in my day!), and back again. A few inclines, but short and sharp and normally followed by a downhill recovery.

Lining up for the start next to the English Institute of Sport, I had gone through my usual pre-race stretches and, like the 5000 or so other runners, eager for the race to get underway. I wasn’t expecting a PB, but I was hoping to go round in somewhere near the 1:45 mark.

8:50am, and a rotund man with a panama hat struts through the field yelling “start delayed by 30 minutes!” Whilst the crowd groaned, we all waited on the start line waiting anxiously for those 30 minutes to tick by… In the absence of any announcement, rumours spread like wild fire. The story of water not being available was the one that seemed to have the most credibility, although most people struggled to believe that could actually happen.

9:30am – the final energy gel has been consumed, and we’re ready to go…..or are we? No. A muffled announcement that was inaudible to almost all the runner signalled another sort of delay. No one knew how long we’d be waiting this time, but the runners were clearly getting fed up. Grumbles containing the words ‘farce’ and ‘shambles’ were getting louder and more frequent.

9:45 – Another announcement, again inaudible. The crowds reaction – a cacophony of boos – indicated that the worst had happened. Due to a catastrophic cock up of not getting water to the water stations, they had cancelled the run! The elites paced around, frustrated. Then, following the great British tradition of justifying any action with the phrase ‘sod it’, they began to run! The boos turned to cheers and we were off!

As we crossed the start line, no one was exactly sure of what had happened. People were asking each other if the race had been cancelled. Would we get a time? Is there water? What is going on?! I was half expecting a police barricade to pop up and try to stop the runners from completing the run, but thankfully sense had prevailed and they let us go.

Then, in a fantastic display of fellowship, the Sheffield locals did themselves proud. Local businesses and local folk alike came out and lined the route, offering their own water. Small paper cups, plastic bottles, spray bottles, whatever they could find – but they were determined to support the “rebel runners”. Bottles of water were shared between us – cries of ‘water here’ and runners running holding a bottle out for others to take carried on for the whole 13.1 miles.

Despite the organisers attempts, the run was actually a huge amount of fun! Ecclesall road was crammed 3 deep for at least a mile, with some of the loudest support I’ve ever encountered on a run. The spirit and camaraderie shown was a nice reminder of exactly how great the running community can be.

As a first attempt at running an event in a TBH vest, I only hope my next effort is a bit less chaotic at the start, although being declared a ‘rebel runner’ does have a nice ring to it!

For those of you wondering, I didn’t get that PB. My prediction of 1:45 was remarkably accurate, ending with 1:44:45! (Time taken from my Garmin – no results forthcoming from the organisers as yet…)

Permanent link to this article: https://www.tynebridgeharriers.com/2014/04/07/sheffield-half-marathon-6th-april-2014-race-report/