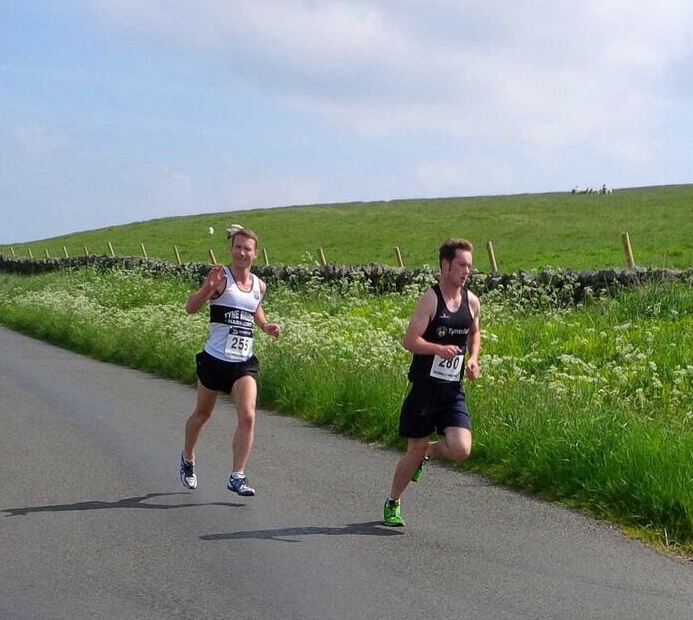 The Allendale 10k is a new race on the calendar replacing the old 8 miler which had been staged by Allen Valley Striders for a few years. I’d had the ‘pleasure’ of doing the 8 a few years ago and vividly remember the hills, lots and lots of hills. With long climbs and short steep descents. One thing is for sure, if you are going to do a race in Allendale there are going to be hills and this one doesn’t disappoint.

I’d had this race penned in for a few weeks as a warm up for the Blaydon. I wasn’t sure who else was doing it but I knew that TBH had been well represented and had scored some success in previous years with Shaun Brown picking up a prize in 2013 and I was fairly sure that Mad Dog Moir and Louis Goffe had bagged prizes previously. I found out late on Friday afternoon that Paul Turnbull was trying to arrange a lift so after some Twitter exchanges I arranged to pick Paul up on Saturday morning, unfortunately not before Paul had been out for a brisk 20 miles on his bike, so hardly ideal preparation for him.

We arrived in Allendale in plenty of time after collecting our numbers we bumped into Rob Wishart and Kerry Reed who had made the journey up on the Claremont RR bus. The race forms part of the Allendale Village fair with stalls, music and the highlight of the day the Strongman competition.  With Paul, Rob and myself thoughts of a potential team prize sprang to mind only to find out that it was going to be four to count. As far as we could establish we were going to be a man short to count for the team.

Paul and I then did a warm up and a quick recce of the start area which had been moved from the main road through the village. I had checked the race profile and it looked like the race would incorporate a long climb out of the village before dropping back down into the valley with a steep run into the race finish. The course had changed significantly from the old 8 mile course with only the last couple of Kilometres being the same. I am pleased to report for all of those that are familiar with the old course that those lovely folk at Allen Valley Striders have left in the infamous finish which incorporates a stinking 300m climb back into the village to the finishing line.

On my warm up I got chatting to Neal Richardson who had seen my TBH vest and told me that he had joined TBH, unfortunately though he wouldn’t be counting in the team race as he hadn’t entered as a TBH runner. On the start line which was on the bridge over the River Allen it looked like there were a couple of hundred lined up. Disappointingly, with the exception of Claremont and Quakers, there wasn’t a big club presence with vests from various clubs in the area being limited to twos and threes.

The race started bang on 11.00 with the weather conditions being bright and warm with a slight breeze. Straight from the off the hills were there, as expected the first three miles basically involved an uphill slog through the fantastic Northumberland countryside. At the head of the race a small group of 5 or 6 runners had formed with Paul Turnbull being involved in the shake-up. I was trying to keep it steady with the intention of using the race as a hard training run. I can confirm it was hard; my first 5k was covered in about 21.30. Rob Wishart had come past me on the top of the climb to the 5k mark and I tried to use him to hold a steady pace.  After the 5k point the course drops and then hits a rolling section of road which consisted of steady rises and falls. The marshals at approximately 7k tried to con me into believing that all the hills were done but I knew they were fibbing. The course then hit a section which involved an out and back where you could see the lead runners heading back on the road into Allendale. Paul was looking strong in 2nd place, Rob was in 9th and I was holding onto 10th.

The main downhill section of the course kicked in just before 8k which provided some respite from the undulations past the 9k mark the course hits a very steep downhill section, the end of which has a hard right hand turn back past the start area and onto the climb uphill section back into the finish. This stretch is no longer than 300m but is very steep, all momentum gained on the downhill is stopped with the right hand turn so it is basically a slog. Rob had held his position and I just tried to hang onto his coat tails. I wasn’t going to catch him but was trying to hold the distance. Crossing the line Rob was confirmed in 9th and me in 10th, Paul had taken an excellent 2nd place behind Ross Anderson from Jarrow and Hebburn who had ran a tactically excellent race. Not getting caught up in the early front running and working his way through the field to take a well-deserved first place.

Unfortunately I needed to get back into Newcastle with Paul so we couldn’t hang around for the presentations; I was pleasantly surprised to hear that I had taken the first V50 prize which is always welcome. With three in the first ten in the men’s race we would have comfortably taken first team if Neal had entered as a TBH runner, finishing in 27th position, the honours this year went to Tynedale Harriers. Kerry completed the TBH contingent and finished in an excellent 49th position.

In summary this is a very tough but enjoyable run in a friendly supportive environment by a great club Allen Valley Striders. Members should make the effort to get along and support it. It’s not a PB course by any stretch of the imagination but is well worth the trip up to Allendale to enjoy some fantastic views across Northumberland.