“The Force is strong with this one”

Another Sunday, another race.

Thankfully, because the Middlesbrough 5K is local (if you can call 30 miles away local!) and has a reasonable starting time – 10:15am opposed to 8:00am for the Edinburgh Half Marathon – it means I can have an extra couple hours sleep, hurrah!

After a relaxing drive to Middlesbrough I fortuitously find myself at Middlesbrough FC’s Riverside Stadium and a prime parking space beside race H.Q.

No sooner had I collected my race number & chip and began fastening them to my vest/trainers when I hear a car horn behind me. Dave Young, accompanied by Keith Rooney and Steve Shotton, are pulling into the car park, so I won’t be the only Tyne Bridge runner today.

Even though it’s just gone 9am, the temperature is already soaring. Clear blue skies (it’s not often you can write that about Tees-side considering all the chemical works in the area) and a faint breeze are going to be god-send for some runners and an absolute nightmare for others. Luckily I like nothing more than a bit sunshine on my back.

The day had been kind so far but it’s about to get even better for this Star Wars geek.

Walking around the concourse are several Imperial Stormtroopers, and these guys are wearing authentic outfits, not d-i-y botch jobs done in somebody’s garage. Frantically looking for someone to take my photo, Steve comes to my rescue and retrieves his camera phone, taking a quick snap of Dave, the troops and myself. Luckily, once the photo has been taken, we’re asked to move along. 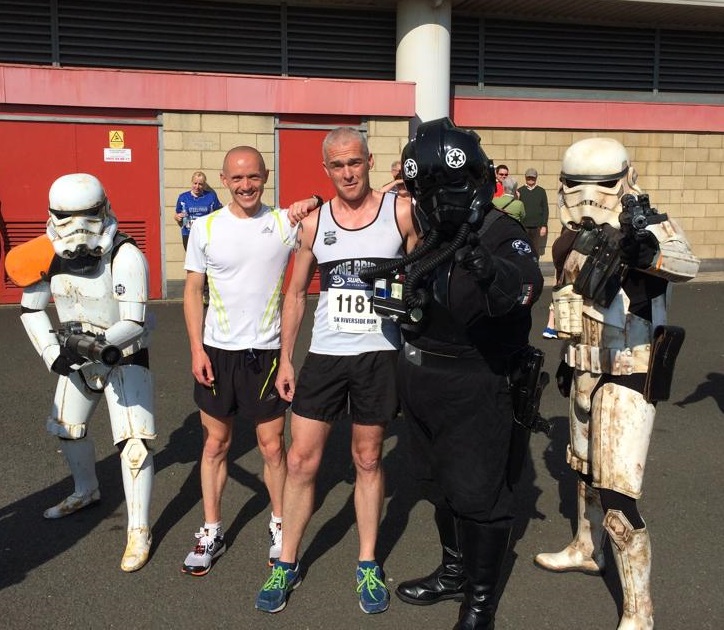 With over 30 minutes to go before the race start, I and the other rebels, sorry, I mean other TBH’ers, head out for a jog along the first kilometre of the course. Immediately, we comment on the width of the course (the race is ran on roads next to the Stadium and its surrounding area) allowing plenty of room for the large field of runners. We continue our warm-up and meet up with club members Jon Moss and Sophie Marr. Also taking part in the race are Alan Hodgson, Stephen Barker, Alastair Spanner and Alasdair Blain.

Naturally, talk turns to predicted race times and what we’re hoping to run in the race. After a good week of training, and buoyed by Alison Dargie’s parkrun performance the previous day, I’ve set myself a target of “low 18’s”, possibly dipping into 17’s, given the fact everyone says it’s a fast course.

We gather on the start-line, wave for the army of photographers (click here for galley), and then we’re away.

The first mile whizzes by in 5:32. A bit too quick for my liking but I can’t help but be pulled along by the strong field of competitors. I notice Alan, Stephen and Alastair have made blistering starts, with myself, Jon and Alasdair trailing behind by 20 seconds or so.  The course then winds its way around an industrial estate, and although it looked tight & twisty in the race pack, the course isn’t actually too bad; the wide roads and foot paths allowing a smooth flow around the bends.

A water station is positioned at the half-way point and I grab a bottle to take a sip and splash my arms to cool down, yes, it really is that hot. A beep on my Garmin indicates the 2nd mile but I don’t bother looking at it, I just focus on catching the runners ahead.

Entering the last kilometre I pass Alastair and prepare myself for the final surge to the line. The course takes us into the stadium and we’ve got to run a lap of the football pitch before we finish.  Although there’s about 500 spectators in the stadium, the noise is over-whelming as they cheer runners across the line (goodness knows what it would be like to score a goal in front of 34,000 fans). I’m astounded when I see 17:36 on my watch (rounded down to 17:35 on the chip time) and feel like doing a ‘Ravanelli’ on the pitch 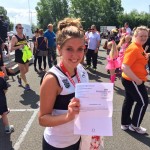 Chatting to the others afterwards it seems I’m not the only one pleased with their time. Sophie has a cracking run (19:06) and finishes 5th lady overall. Steve runs sub 20 and most have achieved (or bettered) their target times. What’s more, collecting a t-shirt and medal for the princely sum of £8 is surely bargain of the year.

So, another Sunday, another race and another fantastic day.

Permanent link to this article: https://www.tynebridgeharriers.com/2014/06/03/2014-middlesbrough-5k-race-report/