This is my home turf, my local race so to speak and you think that I would feel some sort of remorse or guilt running it while representing TBH. But as I pin my number to my black and white club vest the answer is NO.  Would this change come race day? Who knows! It is also coincidently the first road race I ever ran so the chance to run it again could not be passed, although actually being able to get the time off work to run it involved hunting work colleagues down like antelope and pleading with them until they relented. 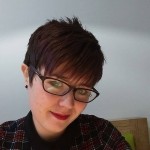 Pre-race prep involved a haircut on the Friday – I was sick of looking like a Shetland pony when I ran with my hair in front of my face – and a shopping trip to Waitrose to stack up on tasty food which quickly turned into a bare essentials food shop when I discovered that I had left my bank card at home. Well I suppose something had to go wrong.  This was followed by a 12 hour shift at work on the Saturday, and trying to keep my fluid and carb intake going proved a somewhat hard (but not impossible) task. I also took every opportunity to stretch my leg muscles. After nine years my work colleagues are used to my eccentric behaviour by now and I am often caught in what would be considered strange poses by non-runners. So the alarm is set and the morning of the race is fast approaching. Time for some sleep I think.

Come race day I was up with the larks, I pulled myself together, got dressed, styled my hair best I could and set off. As I approached The Stadium of Light I still felt no pangs of guilt, only enormous pride. When suddenly I realised that I had left *Gary at home! Well it looks like this race would be ran on feel alone. (*Gary is Louise’s watch and not her personal pace-maker – DD)

Once I had found my fellow 10k TBH’ers and dumped my bag it was time to head to the start line, bumping into some of the Half-ers on the way. A quick chat with them commenced followed by a microphone being shoved under my nose as I was about to let a profanity slip from my mouth. This resulted in me bursting into giggles. Apparently the interviewer wanted to know what my tactics where. Erm? Run and don’t stop until I cross the finish line?

Once we were off I settled into my pace very quickly and felt comfortable with it. I had decided to let the others go off as I knew that I would not be able to keep up them being the speedy things that they are. So I would instead be ‘bringing up the rear’ for TBH this race. The first cheer of “come on Louise” came from Anji Rippon as I crossed Monkwearmouth Bridge. The first slope fast approached as we ran around the outside of Mowbray Park. Heading back towards town I bumped into some friends also running the 10k. One who was dressed in his combats complete with rucksack. He’s a Royal Marine so he is crazy like that. The first water station soon approached and was most welcome. The contents of the pouch was distributed between my back, face and mouth. Another well done from Paul Brown as a approached the cinema followed by a high five from Anji (again) and a “come on Louise” from David Daniels. To which my friend commented “you’ve got your own personal cheering squad”.

Crossing the Bridge I could see the Half-ers coming in the opposite direction with Andy Smythe and Stevie Barker leading the charge for TBH. A resounding “come on boys” was shouted out and then I headed off down the bank towards the University running Kenyan style. I have no idea what it is or if I did but it seemed like a good thing to shout out as a hurtled past people. A sharp turn at the bottom and along the river I ran until I came to the hill that defeated me last year. This time around I kicked its ass! Woohoo! Onward I went, seeing a glimpse of Jon Moss as he headed into the final stages of his 10k race.

Finally I hit the coast and knew that the incline at Roker Park was coming.  Si Kristiansen‘s words from Tuesday, which had been playing through my head at various points during the race, popped up once more “jaw loose, hands loose, push back with your arms” and this mantra helped me through Roker Park. The second water station was passed, along with an ice lolly which was very welcome! The next stages were uneventful until I hit the final 800m, where a shout out from Micky D was just what I needed to spur me on and pick up the pace. Another shout from Jane Shearer saw me sprint the remaining 400m.

My plans for a graceful and elegant finish went out the window when three ladies decided to hold hands, blocking my path and stand still on the finish line for a photo! As I hurtled towards them I was pushed by another runner which sent me into the shoulder of one of the three as I crossed the finish line. I apologised even though I felt that I shouldn’t and was greeted with a mouthful of abuse! My what a nice way to treat your fellow runners! A final well done from John Goldsbrough and I went off to collect my goodie bag, medal and t-shirt. The can of non-alcoholic beer was soon opened and drank! 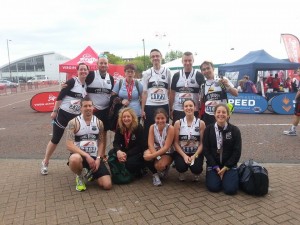 Conversation with fellow runners and TBH-ers soon brought about the fact that the 10k was longer then 10k. This did not ease the disappointment of not getting a PB in this race. All in all a pleasant race for me in my home town, with the morning topped off by watching the Half-ers enter the finishing straight and looking a lot fresher then I did!

Then it was back to work to demolish a packet of Jaffa cakes!

Permanent link to this article: https://www.tynebridgeharriers.com/2014/05/05/sunderland-city-10k-race-report/