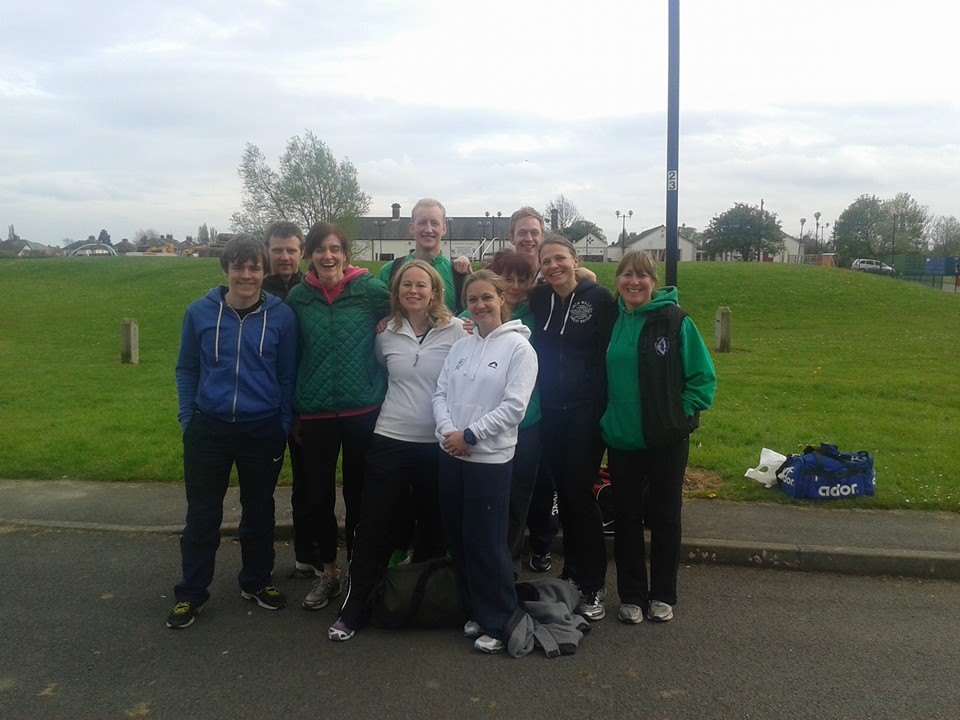 The experience that was Northern Track and Field Darlington, May the fourth… (And I believe it must have been ‘with me’, Dave Moir!!)

Well, really!??? Did you really think I could resist writing a ‘race report’ on such an amazing experience?

Bless you, those of you who suffered my last ramble, but please bear with this because it’s really not all about me!… this time

Sooooo, what on earth was this track and field fuss about anyway?

Well, I will try to summarise (not my strong point!):-

Points for taking part and for helping officiate (hold a tape measure, move a hurdle …that kind of thing)

Teams combined scores determine which league you compete in…

Having blindly stumbled into being involved due to having no ‘official’ role in the TBH committee, I was now a joint track and field manager with Chris Graham and the Darlington fixture was my chance to learn the ropes alongside the cool, calm and experienced Dave Moir.

So with 10 days to go, an empty sheet and 38 spots to fill, I was on a mission!!- Hee hee, cue Mission Impossible music….

Having tried, not very successfully, to recruit ladies from TBH, (I understand ladies, all valid reasons with races etc going on, distance and short notice ) Heaton Harriers ladies via Jenny Friend were encouraging me that all was not lost for a good effort from the women. Willing participants all, the combined force of 8 of us were going to manage to cover more or less all the events, if we would ‘have a bash’. …That was very much the name of the game in the end, but more of that later…

Having been advised to ‘not do the hurdles’ by my friendly, caring physio, I was going to be last name to fill the gaps in the event sheet and went about collecting peoples preferences for events….the sheet was looking a bit healthier with oh about 15 spots now filled including a high jump and surprisingly shot, javelin and discus as most popular ???!!! So only 23 more spots to fill, erm….eek!!

Having had three late nights out in a row following a night shift (and not even mentioning my knee!), I was at the peak of physical fitness on the morning of the event and armed with as much cake and Pringles as I could carry.  So together and calm did I appear, that I got a sympathy coffee from the ever ready and cheery Sara Sedgley to keep me just this side of sane, as we waited for a lift from some real athletes

Dave had sagely warned me that I would be doing the long jump as it was the first event at 11:30am, and really who else would be wiling? So the rest of the car, namely Sparrow, Sara and Andrew (one of our 400m stars) had to suffer an earlier start and being there for longer than they probably planned (THANK YOU GUYS!!)

After quick introductions to the Heaton Ladies…Jenny, Lisa Boyd, Sue Linsley, Helena Walsater-Lowes and Janette Kilgour, then a quick check that we’d covered the next event (Hammer) …it was time for me and Helena to ‘have a bash’ at long jump….

Ignorance is truly bliss, because who knew that we were lined up against the smallest, lightest and youngest field of athletes I’ve ever seen ?!!   Ahaaaaa!! (Cue picture of sunlight shining through thick cloud in glorious revelation) It was a FACT.  We were definitely going to be the last for most of the events!! This was the biggest hurdle that I jumped all day!!

……and once I was over it, the ability to encourage and approach every event in the right spirit was already there

I had an encouraging thought that these girls, and guys, could be the future Olympians and International competitors for Great Britain and we were showing them the spirit of competing that should never be lost…to do YOUR best !!

So with a smile on my face and hysterical laughter at the sea of shocked young faces when I asked how you do this because I never had, I walked up and down a bit, guessed a distance to run up, sprinted and jumped!!…and I didn’t touch the plastercine…and it was a valid jump! WHOOHOO, points for the team- pure and simple!! Helena too had the same attitude and I’d like to think we lifted the spirit of the other girls with our chatter and encouragement and excitement at actually recording jumps and taking part!… and miraculously we weren’t last!! 3 jumps and it was done! 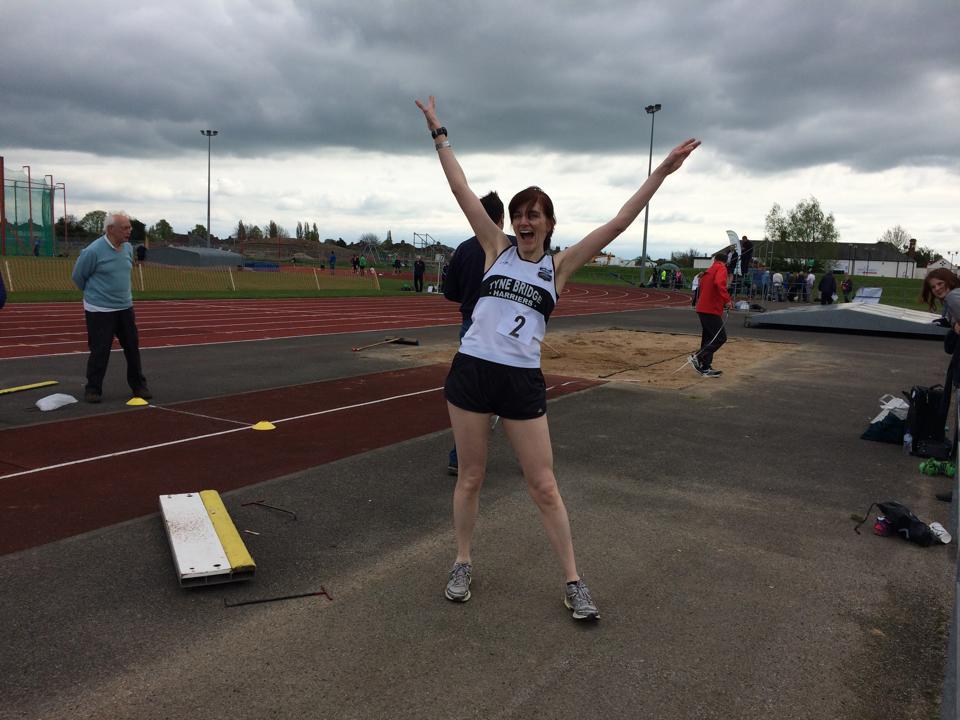 So, now buoyed by an unexpected enjoyment of a hitherto unexplored field, I was ready to try anything!! Next up, at the hammer, Sara and Jenny were demonstrating skill and guts with their own journeys of discovery. Jenny showing an impressive technique acquired by practice at these events and other team members were giving hints and advice. The team was working!!

The day from then onwards ran at a rate of knots….the sheet had to be filled with names either

We were doing well…about 8 out of 38 spots weren’t filled by the Heaton and TBH crew – represented by Alison H, Sara S and me…

And then Mr Moir pulled the rabbit out of the hat! Tada! Step into the limelight Mrs Emma Moir!!  I didn’t hug you because , well we hadn’t met before, but I truly could have kissed you…to have a surprise extra woman be willing to step in and cover events at that moment so that we could do even more, and get more team points, was pure water to my slightly frantic soul!

If you haven’t already gathered by my blather, I was really enjoying this!! The team was one of the most supportive, willing, determined and gritty bunch I have ever met!! I believe we were all suffering injuries of one type or another, we were not what you would call in the flush of youth , we had never met before and many of us had never even attempted the event our name was down for…as an A competitor. It was a show of all that is great about competing.

Special mention goes to Sara Sedgley for willingly subjecting herself to having a go at the high jump which she really wouldn’t have chosen in a million years to ever do (I know, amazing woman!!) and to Lisa Boyd, who despite whatever was going on which made her look close to tears, stepped in to replace a team mate who wouldn’t have had time to recover from another race!! Awesome!!

You are my heroes….of the ladies team….

Men, I’m sorry that I didn’t fully know what on earth was going on…I was kinda occupied for some of the time

But I was there with the other ‘fishwives’ shouting encouragement for:

#the ‘Duracell powered??’ Dave Moir, yet again running round the track, to cover yet another event…..

#The Heaton Harrier, Mark Banks who did an awesome job of coming second in the high jump and was one of the 4x400m team,

#Andrew Greenwell who despite not hearing the barely whispered ‘SET’ which delayed his start, came second in 400m

#the obviously relaxed ‘Cheshire cat’ Sparrow Morley gently jogging the first 3 times round the track in 1500 to power away effortlessly in the last lap to win.. 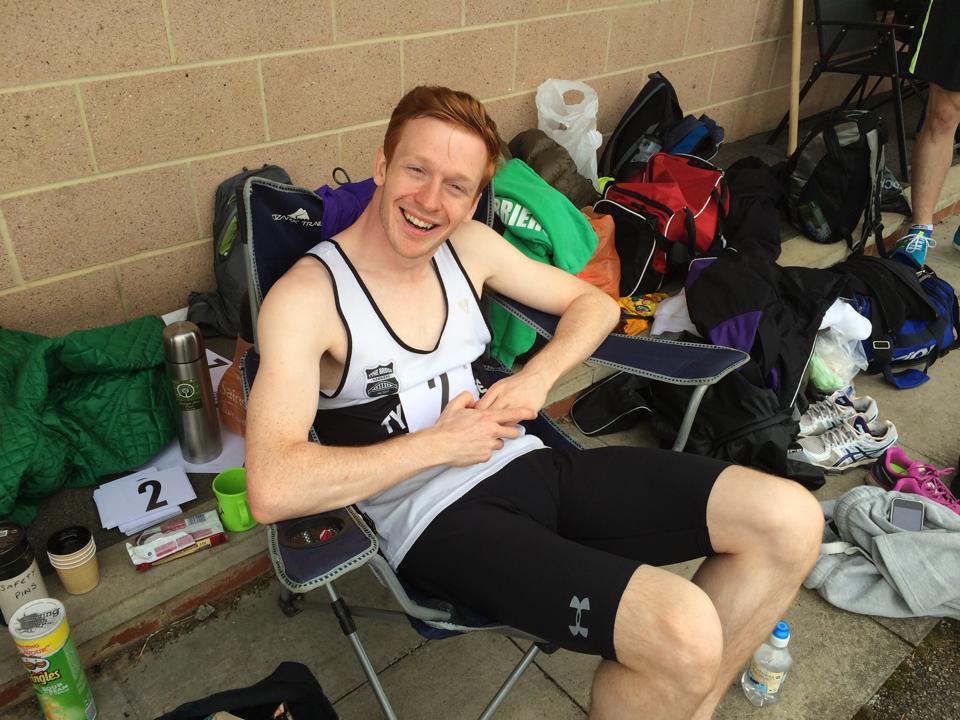 #the amazing Ben Priestley who led the first leg of the winning 4x400m which was one of the highlights of the day…see the video on facebook!!

#Alasdair Blain, who should probably have told me he used to triple jump at school and he was doing really well, before I ‘persuaded’ him into running 5k round and round and round the boring track!!

# Dan Thirlwell (or should it be Hurl well!) who just got on and threw every missile available to clock up an impressive amount of points!…along with our own indefatigable George Routledge

…but in total agreement with Dave Moir, man of the match goes to Nick Pearson who despite a fall at the first of the 400m hurdles overcame nerves, pain and obvious injury to run the rest of the race in a seriously impressive time and continue with all the other events and to be an ever present encouragement and smiling face. Hats off to you!! 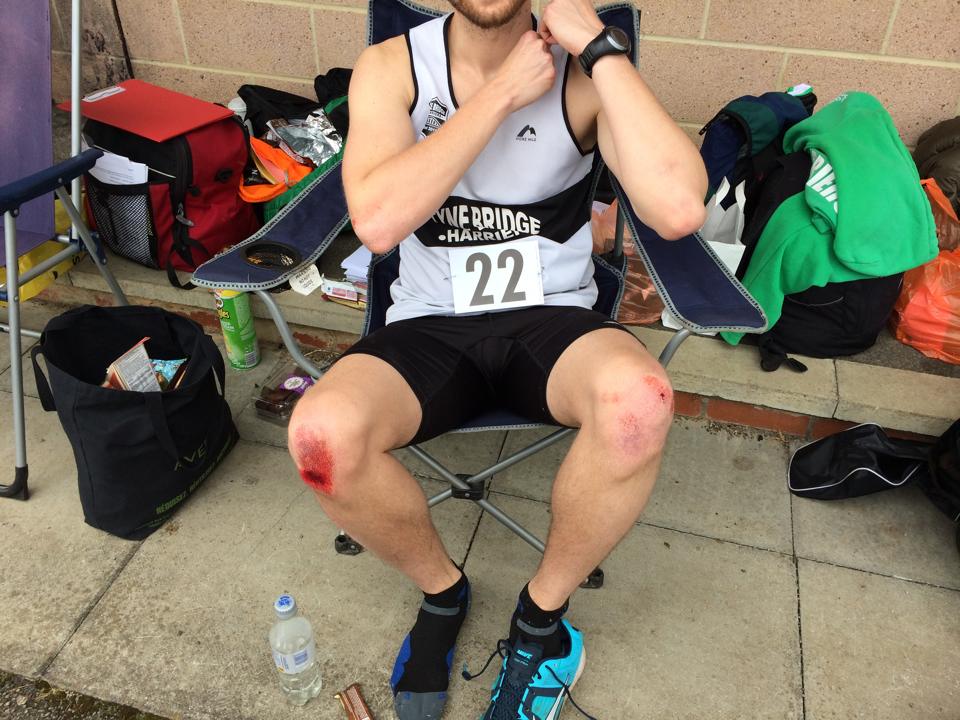 Unsung heroes so far… Sue Linsley’s 4th position in the 3000m, Alison’s awesome performance in the shot put, Helena’s amazing technique in High jump (watch this space cos she’s gonna get better!) Emma Moir’s great time in the 200m and Janette Kilgour’s ever improving javelin… ask Dave Moir about  her winning one year’s javelin. (NB. She is 65 yrs old.)

What have I gained from this whole experience??

Well, I’m looking forward to you all eagerly getting your names down for events on 7th June and beyond! But personally, I have gained an unexpected aim for my track and field season of wanting to long jump over 4m and I want to do the veteran 100m hurdles (believe me I had NO idea!!!)

Who knows what new talent or interest you could discover just by having a bash?….why don’t you find out?????

Match results can be found here.

Permanent link to this article: https://www.tynebridgeharriers.com/2014/05/05/noe-div-3e-track-field-report/