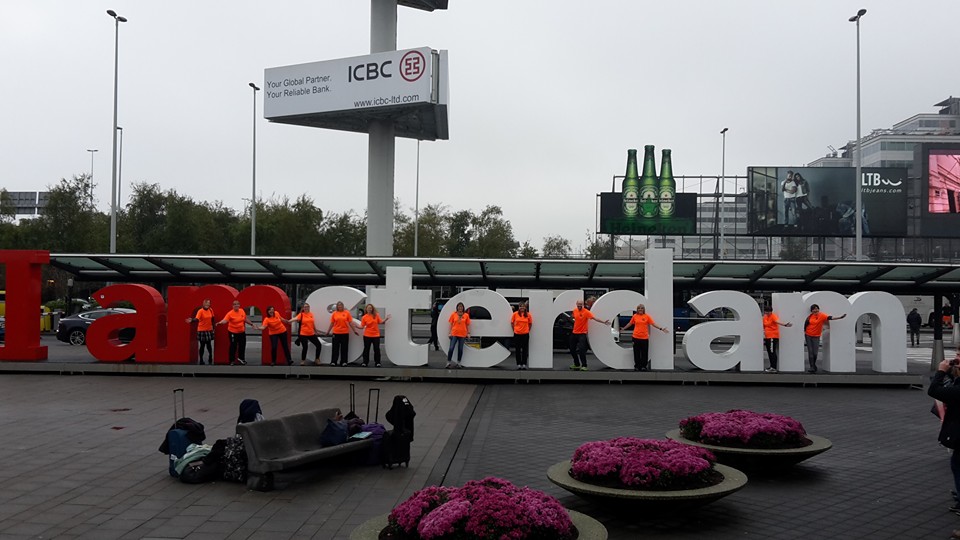 As a member of the TBH Amsterdam Touring party, Louise Kelly knows exactly what went on during those 48 hours in the Dutch city. Thankfully, however, as this is a family orientated website (and we don’t want a visit from the boys in blue) Louise’s report focus’s mainly on the weekend’s racing.

I thought I start this race report by going back in time. When I was approaching my late 20’s I seriously started to think about what I had accomplished in my life and found it void of any significant events. So I wrote a list of the things I wanted to do before I reached 35. Skip forward a few years and I have achieved most of them and even added more to it all of which are funnily enough running related. High on that list was a city that I have wanted to visit since I was 18. It takes no genius to realise that it was Amsterdam, so in May of this year I signed up for the half marathon figuring it would be a nice autumn race to do. I knew that a good lot of the group 5 ladies had already signed up. Sara James, Margaret Hagood and Margi Eccles for the full and Evie Maholam, Deborah Airey, Elaine O’Mara, Vicky Forster and Andrea Hayden for the half along with one of our coaches Morag Kerry and Vicki Deritis. It soon became apparent that this would be a full on Tyne Bridge Harriers invasion as people from all groups started posted that they had signed up. From the likes of Marc Fenwick, Christopher ‘Hui’ Huitson, Alasdair Blain, Andy Smythe and Terry Scott – aka the speedsters of TBH –  to Sophie Marr, Becky Parkin, Sophie Wardrobe and Alison Bulman. Let’s not forget the birthday boy himself Tony Carter who was competing in the 8k race alongside Joy Fenwick and Arnaud Albertini. Apologies for anyone I missed out, there was a lot of us!

Building up to the race was an extremely frustrating time for me having had issues with my hips since I ran the marathon in Manchester. For months I struggled to run and even dropped out of races which was soul destroying, eventually I took the plunge and went and had it looked at. Safe to say it put me out of action for some time and I only returned to running properly four weeks before I was due to run in Amsterdam. So it was with a lot of hope and just plain ignorant bliss that I drew up a four week training plan! Safe it say it went well, I managed to get out and run 10 miles two weeks before hand which was going to be the determining factor was to whether I ran or not. Days passed by and the race grew nearer. We lost people to injuries such as Lee Cuthbertson and Jen Patterson but they still came along with Lindsay Walsh and supported their respective groups on the day. Cheerleaders are such important parts of running for the mental boost it gives you, so thank you for that!

Eventually the day to make our way to Amsterdam arrived. This involved a 5am start for me to catch the first metro to the airport. I like to be early. Once at the airport I bumped into Paul Waller who was also travelling over and we kindly adopted him for the weekend. He certainly brought the mothering instinct out in some of the other girls in the group! We also looked like a weird version of a hen party with our matching orange technic t-shirts on! Thanks to Sophie W for sorting those out! 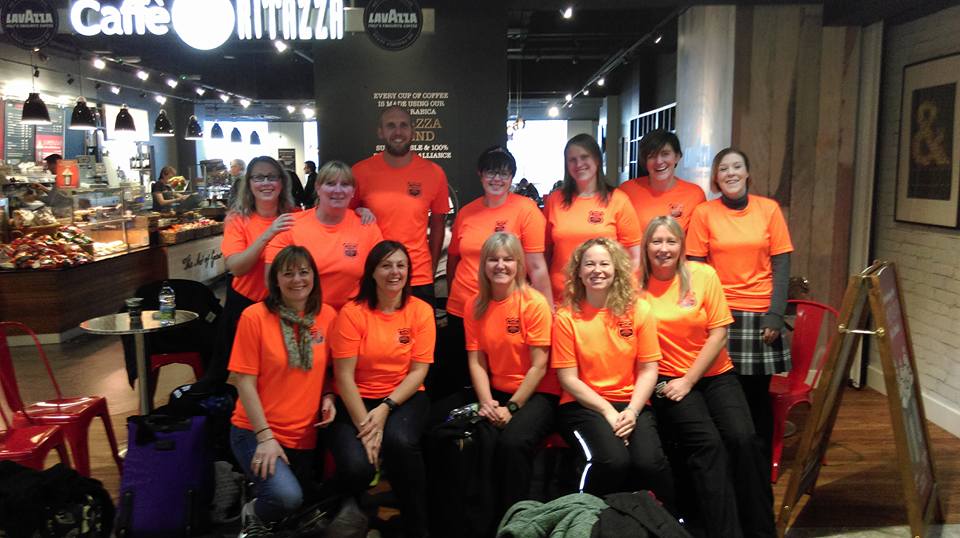 Eventually we were up in the air and then before we knew it we were landing in Amsterdam! Three hours later we had made our way to the expo to pick up numbers and buy slippers, then partied outside to the music being blasted out by the fire truck. Well and truly getting into the spirit of things! Dinner was provided by a lovely little Italian restaurant Café Piazza in the city centre. I highly recommend it for future visitors. They even had a specialist marathon runners menu full of healthy options for carb loading! After eating we had a look around and ventured into that well known area of Amsterdam, which is perhaps the funniest thing I have ever seen!

It was a strange feeling waking up at a reasonable time, I am more used to getting up at the crack of dawn and making a mad dash for it. So an early afternoon start time was a completely new experience for me for running a half marathon. Several questions popped into my head, such as when should I eat? Do I have a small or big breakfast? Do I have an early light lunch? In the end I went for the brunch option and ate later then I normally would in the morning. It turned out to be a good decision. The hotel had also provided runners with bottles of freshly made smoothies, granola bars and iso drinks. These were very much welcomed and provided a delicious pre-race snack. Eventually we made our way to the train station to catch the metro to the start area at the Olympic Stadium. Bags were dropped off and we made our way to the starting pens where we bumped into Vicki D and got a high spirited hello from Lisa from Aurora running club. It’s always good to see fellow north east runners when you travel for a race.

Now leading up to this I had been asked by several people if I was going for a specific time. The answer to this was ‘Dude, I just want to get round the bloody thing!’ and again I was asked by the girls if I was going for a time. The answer however didn’t come from me but from one of the other girls who said ‘The pocket rocket will just go do her own thing’ which in fairness is true. I train on my own so I tend to race on my own as well, besides I wouldn’t have been much company any way. As we approached the start I noticed the race clock at the side showing how much time had passed since the first lot of runners had set off. The time showed just over 36 minutes, and all I could think was ‘Marc Fenwick will be almost half way round now’ (as it turns out he was, along with the rest of the speedsters). I ran across the start line and quickly settled into a nice comfortable pace. The race was uneventful itself in terms of drama and action, unless you count dodging families crossing roads with suitcases as action worthy, but it was never going to be that kind of race for me. I merely ran and enjoyed the sights, taking in the atmosphere, paying a quick visit to the port-aloo half way round, enjoying the crowds, hi-5ing the kids who held out their hands and dancing along to the music using my arms, if I had actually had tried to dance then the race would definitely have had a bit of drama in it, as I would have quickly became a tripping hazard.

Soon the end was in sight and I had 1km to go.  A cheer sounded out from the right hand side of me and I turned to see Margaret H and her partner walking along, having finished their respective races. 500 metres to go and the turn into the stadium approached. Time to kick it up a gear. Shout out from Jen P and a quick pose for a photo while still running. Finally into the stadium and on to the track, somewhere in the crowd were my cheering squad. I couldn’t hear them or see them as everyone was shouting and cheering people on but I knew they were there. So it was with a sprint finish that I crossed the line, only 2 minutes off my PB time, and headed straight to the nearest kiosk selling beer, after collecting my medal of course.

Post-race saw me meet up with the girls and giving everyone hugs and congratulating them all. Later on I met up with everyone else from the other groups, I was the only group 5 member not worn out by the race, where I congratulated everyone who got a PB and even those who didn’t. It was the perfect end to an amazing weekend!

Permanent link to this article: https://www.tynebridgeharriers.com/2015/10/20/amsterdam-half-marathon-2015-race-report/