Tyne Bridge Harriers were formed in 2011, and one of the earliest runners to join the club was Alex Lockwood.

In this report, Alex looks back at four years of running in the black & white vest. 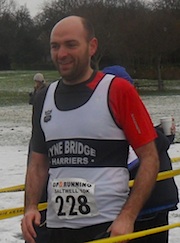 In June 2011 I joined Tyne Bridge Harriers after moving to Newcastle. I worked elsewhere (in that city of red and white whose name shall never be mentioned) so, a newcomer to the ‘Toon, I wanted to get to know some more people. I’d also run the Great North Run in 2009 in a time of just over 2 hours, and it had hurt. It was fifteen minutes off my PB, and I wondered why. I thought I’d trained well! The clanging calf muscles said: obviously not, son (my muscles still moan with a Cockney accent). So I did a quick search, found Tyne Bridge and Jesmond Joggers and Heaton Harriers, and thought I’d give them a try.

Four years later and I’m still here (I tried out TBH first, and never left). Out on a long run the other day, I was thinking what four years of membership have given me, what I’ve learnt from being a member of a running club, and thought it might be good to share, and to see what others think. When something becomes a part of your life over time it’s easy to take it for granted—and writing this is a way to show my appreciation back to a Very Good Thing In My Life. I hope it stimulates a bit of a conversation about what others think too. So here are a few things I’ve thought about and learnt from Tyne Bridge in the last four years.

Not so hard under our first-past-the-post system… Not still bitter… Anyway, moving swiftly on. Being a newcomer to the running community, one of the things that has most struck me about running clubs in general, the wider community, and Tyne Bridge in particular, is its democratic ethos. I don’t only mean an open door policy to its committee or to its coaching. And everyone I tell about the supportive, active running scene here in the North East almost can’t believe it is this good and accessible.

But it’s a wider definition than that. For a big bloke over six foot, I’ve never really had to worry or think about my place as a runner on the pavement or in the park. That’s not the case for some others: made all the more stark last month by the threats in Jesmond Dene. The strength of the club’s group structure and in particular the Wednesday sessions—for the juniors and for the beginners—opens up public spaces on dark winter nights and past-times that can feel out of reach and exclusive to some: both physical and psychological barriers that can close off this activity we love. Running in a group claims a democratic access to spaces and times in the city that gives people a lot of confidence and sense of okay-ness with being there, doing this thing called running, regardless of speed or skill. In some ways this seems to me the very most important thing about a running club, at all levels.

When I started I ran at the back of Group 2 (in terms of speed, now about the middle of Group 3). I ran with people who are still at the club, and some who have left. I now run with some new people. It’s interesting to watch the comings and goings: the first person I spoke with four years ago was Rob Kirtley, and it’s brilliant to see him back (in fact I just saw him in Heaton Park leading the Beginners’ Group). It’s interesting to track friendships as you run with one bunch for a year and then either good form or injury moves them up or down a group, or sometimes people head off (bye Kim! Bye Henrik!). It’s a dynamic to reflect upon, and, in terms of running ability and commitment to training, the thing to think about might be this: ability, bodies and proximity are sometimes the key factors in who we know and how well we know them, who we run with, and that sometimes it’s good to remember that, and to make a case (socially, at races not training, or at the track & field) to move out of ability zones and meet people where they’re at. Again, this isn’t useful to think about only in running. I used this at work the other day to overcome a problem, and it helped.

I’m a writer, and spend a fair amount of time on my own. It can make me both dull and grumpy, as some of my friends from the club will no doubt testify (Sinead?!). When I come to the club and hear about the hard graft of others, it is not only a great leveller (doctors run with taxi drivers with nurses with students with teachers with mothers and fathers and…), what I also see is how some of the busiest people are also some of those that give most to the club. They are selfless in their commitment to helping others. This isn’t only good for me as a runner in the club. Knowing these people and seeing how selfless they are makes me want to be a better person, which is why I get along, bake cakes, take photos, sometimes don’t run and cheer everyone else on instead. I could just stay in my office writing, after all… This isn’t restricted to running clubs—many and most groups acting socially are made up of good, selfless people. But in a time of austerity and when reading the papers makes you think everyone is out for themselves, being part of such a club feels like we’re defining society a different way. Every small thing we do for the club—even as small and simple as encouraging other groups as they pass by on their session—adds to this definition.

A few years ago I worked on a project for the Arts Council called the Cultural Leadership Programme. It was all about identifying and working with the current and next generation of cultural leaders to move our arts organisations forward in a creative and sustainable way. I did a lot of research around leadership: what makes a good leader, what evidence there is of great leadership, and what a difference it makes not only to an organisation and the people who work there, but to the wider society. Having worked in some places with awful leadership, one thing I don’t take for granted is the leadership of Tyne Bridge. One element is the open and democratic, supportive ethos. When this comes from the top down as well as the bottom up, it defines a group. But beyond that, there is a genuine sense of care. Because of the leadership in the club’s formative years, this care is in the bones of the club, and it will now stick for a generation. Because of the strength and openness and supportive nature, it’s actually always got stronger even when tested. They can retire proudly right now.

Basically, you need to have, like I do, a bit of a belly, and go for a photo finish, or send her to Ibiza for a week. (Just joking Sophie!)

Deliberate Practice is a technical term developed by psychologists in research to understand what makes elite performers—not only in sports, but in areas such as music, art, business, etc. Basically, if you want to get better at something and flourish, perhaps even get close to mastering, an activity, your practice cannot simply be repetitive, but must be deliberate and focused on improvement. To do this effectively you need to break the task down into its elements, find good mentors, get immediate feedback, and keep practising the same tasks until you see improvements. This is everything you (can, if you want to) get from being a member of the club. And it’s certainly what the coaches at TBH help with—although only you can put in the effort.

The point here of course is the obvious one, but running with a club will make you a better runner. When you are surrounded by people who know more about a subject, are willing to share that knowledge, who push you on, who coach you freely, and challenge you to do better, you will do better. It is a core element of both “Flow” and “Deliberate Practice” to have these immediate feedback loops and support groups, if you want to improve. Doing it in running means you can also do it elsewhere, and so…

In many ways, all of these points are the same point: what you can learn about life from learning about running. This is to do with the world of Deliberate Practice (see above) but it’s also to do with the bodily nature of running. Because running is a physical activity we properly feel it—and we all know it can hurt, as well as the runners’ high. But  knowing the world through our bodies is a powerful way of understanding the world, and our place in it. As Scott Jurek says: “Do things, always!” It’s the doing that counts.

It’s also to do with learning from those who can teach you something from an outside perspective. My ‘A-Ha!’ moment came one day a few years ago when running with a top runner called Darryl, now at Highgate in London. We used to do long runs together, although now I couldn’t keep up. We were talking about what goals we had, and I was saying how I was aiming for 1:30 in the Great North Run. He said: “No, you can do better than that, you should be aiming for 1:25.” It came at the same time as we had been talking about the idea that most of our limits are self-imposed. If I only thought I could do 1:30, I’d do 1:30.

So I changed what I thought was possible. And I ran faster (I’ll tell you what I did in a minute). Is there a lesson, or am I just waffling now? Perhaps both. But, finally, through the deliberate practice of running and recording the improvements I came to if I could shift the idea of what I thought was possible in my running, I could do that elsewhere too. The shift didn’t come from only thinking about it, though. It came from the hard work of making the change. Now if that isn’t a life lesson I’ll eat my running shorts.

Did I say seven? Can’t count. I meant eight things. Three months after joining, I ran the Great North Run alongside two Northern Irish lads, Colin and Dan in a time of 1:37:00. A 23-minute course PB and an 8-minute half-marathon PB. The next year I did it in 1:30:15. And then the year after, 1:24:57, winning perhaps my proudest accolade of my four years when Kenny Mac, sitting in the Lowlights bar in North Shields, said afterwards “that’s the run of the day, that is”. I was also rewarded with one of Lizzy Clamp’s roast potatoes from her Sunday lunch.

Anyway, if you’ve read all that—thank you!—no doubt you’ve got some thoughts of your own? What is it that you’ve most benefited from being a member of a running club?

Permanent link to this article: https://www.tynebridgeharriers.com/2015/07/18/alex-lockwood-runner-profile/