Sunderland Half Marathon: Sunday 3rd May 2015

Full of enthusiasm following my surprisingly good run in the Manchester Marathon, I entered the Sunderland Half just a few days before the entry deadline. However, that enthusiasm soon turned to dismay when I checked the long range weather forecast for race day: wet and windy!!

I’ve got to admit, the days leading up to the race were pretty miserable as the weather forecast got worse with each approaching day.  This was becoming one race I wasn’t looking forward to.

But thankfully, on the day before the race, I had the good fortune of bumping into Michael Nemeth at Newcastle parkrun. Anyone who knows Michael will know what he’s gone through recently, and although he’s mighty proud of what Shaun Cowan, Nicola Brady and all the other marathon runners have achieved in the past few weeks, there’s no doubt he would have given anything to be alongside them. And that’s when it struck me how fortunate I was, being fit and healthy and able to run whenever I can.  Given the choice between running in crappy weather conditions or being unable to run at all, I know which one I would choose every time.

So with a new outlook to the race, I went to bed on Saturday night knowing full well there was a possibility (ha!) of getting wet the following day.

Sunday morning, and surprise surprise the forecasters had got it right. It was teeming down. And the strong winds seemed to be blowing from all directions.

I don’t know if the poor conditions had kept many runners away, but I easily grabbed a spot just a few rows from the starting line and without too much hanging around we were off. Using my recent marathon time as a guide, a running website had predicted my half-marathon time to be around 1:23 (6.22 mile pace) so with that in mind I set off at 6:10 pace – well, you can’t have a computer telling you what to do. 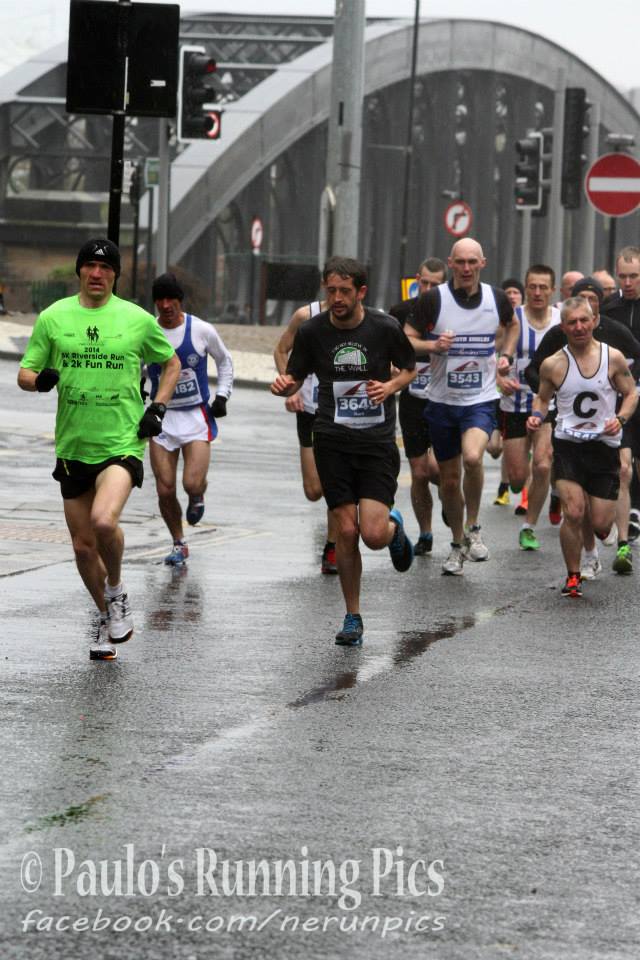 Me in the green t-shirt at 1K (the t-shirt came off later on).

The first few miles ticked along quite merrily. Granted, it was persisting down and everyone was soaked to the skin, but the route through Sunderland city centre meant there was at least some shelter from the wind. That was until we reached the 3 mile marker and then WHOOMPH!! A 40 mph headwind. For the next mile, we were at the mercy of the elements as rain was coming down almost horizontally in the strong winds and large puddles began developing on the course.

At mile 6 the course reached the end of an out-and-back section, providing runners an opportunity to see others running the other way. As I mentioned in my marathon report, it’s a great tonic when you see club-mates/friends in a race and can shout cheers of encouragement. It was also at this section of the course I noticed Louise Rodgers for the first time during the race. But where were the other female runners ahead of her?

Through a couple of parks, back across Wearmouth Bridge and the race was now heading towards Roker, via a short detour past the National Glass Centre. It was around here I noticed a few niggles, one in my left calf and another in my right thigh. Possibly a result of the bitterly cold conditions (we were now running directly into the wind & rain) or just old age, I tried to shake them off by doing a few stretches whilst running, and for the most part they seemed to work. After a lap around Roker Park it was back onto the coast road for the long run-in back to the Stadium of Light.

Turn the penultimate corner and you’re greeted with a slight climb as the road bridge crosses the metro lines below. But it’s slight when your legs are fresh and your mind is nimble. After 13 miles it seemed more akin to the north face of Everest.

Turning the final corner and entering the home straight I noticed Nicola Brady cheering from the side-lines (Nicola had competed in the 10K event held earlier). Grateful for her support in terrible conditions I tried to repay her by sprinting to the finish line but sadly the sprint never materialise.

After a few congratulatory hand-shakes with other finishers, I headed off to claim my goody bag and to put on some warm, dry clothing before hypothermia set in. Despite the truly awful conditions I kind of enjoyed it out there. Okay, I was unbelievably cold afterwards (and literally didn’t stop shaking until I’d reached home 20 minutes later) but you’ve got to take these moments because you never know when injury or illness will deprive you of your next run.

I just wouldn’t want to run in those conditions every day!!

Huge congratulations to Louise on her triumph, well done to all my fellow TBH’ers for battling the elements and posting some terrific times. And finally, massive thanks to the race organisors and  volunteers for putting on a terrific event, despite the terrible conditions.

Permanent link to this article: https://www.tynebridgeharriers.com/2015/05/06/2015-sunderland-half-marathon-race-report/