Feeling under the weather and got the running blues? Hopefully Catherine Eaton‘s race report from the Yorkshire Marathon will put a step back into your running.

This race was a long time coming for me, it was my comeback race. It sounds a bit crazy and you’re probably wondering why didn’t I go safe and aim for a 5k.  I’ve never really been very quick, I’m not the speedy sort. 5k just means pain to me, give me 10 miles over 10k any day.

2013 was a dark year for me with running.  I had various injuries over about a 9 month period sometimes only managing 3 miles on an entire week and eventually having to accept I’d need to stop altogether to get fixed, a tough decision for anyone who loves running.  Running a marathon again was a distant dream but one I never let go on.  Roll on October 2014 and here I was standing at the start line of the Yorkshire Marathon and I had to pinch myself – it was actually happening and I couldn’t stop the grin on my face.  This was the tick in the box and a celebration of the training that was in the bag.

Sunday 12th October, 5.54am: Race morning had arrived, I woke up 4 minutes ahead of my alarm clock. Yikes, race day!!!! This is it.  I managed to eat half an untoasted bagel for breakfast – the first challenge of the day done.  Dressed and kit all prepared, off we went to walk down to York train station to catch a shuttle to the start at the University.  It was very foggy and very cold.  The organisers had warned of a delayed start due to the weather.  I thought back to my experience at Liverpool Marathon where we had a 30min delay due to incomplete road closures, during which I basically zoned out and by the time the gun went I was so over the race and it didn’t go well.  I really hoped the same wouldn’t be happening at York that day.

On arrival to the University, I couldn’t believe how chilled out everyone was.  The campus was open, so runners had copious amounts of toilet facilities to choose from, a nice café, costa coffee, tv – all very relaxing! Probably not quite what you need to get you raring to go, so I was keen to get outside and mentally get ready for my next challenge of the day. I changed in the warm before heading off to the baggage area where on-route I found Dave Rowe, Dave Moir and Alasdair Blain who had driven down that morning!! Ouch.

After dropping our bags, off we went to our zones. Yikes, this was it, this was happening!  Nine thirty, the gun went and off we go!  I would like to tell you about the course, but I couldn’t actually see most of it with all the fog.  I do recall about 2 miles in running towards York Minster, the bells were sounding especially for us running by and the crowds were several deep cheering us on – it really did lift the spirit and spurred us all on for the next section.  We ran through the town centre before making our way out to the surrounding villages and beyond.  The 3’30 pace maker was close and I stayed with the group for probably a good 10 miles.  He was very erratic with pacing though and I didn’t trust what he was doing.  I decided to let him go, I really didn’t want to blow up and ruin my race. I was running my own race now.

If you’d heard the Yorkshire Marathon is flatter than London, as had I, guess what – it’s all lies!  I should have known this as Yorkshire isn’t considered flat – marathon route or otherwise.  There were some sneaky inclines that sometimes dragged on and on.  There were also 2 sections of the route when you had to run down to a turn point and up the other side of the road, similar to what you get with the Blaydon Race.  The first was quite short and before long you were through the turn and heading back (up an incline!), the second was much longer – starting at around the 17 mile mark, round the bend and up the next sneaky incline, it wasn’t until mile 20 that you were finally off the ‘out and back’ part and no longer passing runners coming the other way.  For me, I seem to get easily distracted watching those coming towards me and after a while I told myself to stop and to get back onto concentrating on pace, breathing and up the next incline that lay ahead.

The mind does wander on a marathon, there’s lots of thinking time available.  I remember thinking what my first post-race drink would be and decided on a shandy, hardcore me you know!  I also remember thinking about ultras, the mileage they deserve in training and running in the marathon that day had me absolutely decided that I’ll never sign up for one, ever! I really did feel like the race overall though went over so quickly for me.  In between taking on gels ticking off the mile markers, taking in the crowds, the atmosphere, the bands playing and the cheers, it wasn’t so long til I was in the last section of the race.

Mile 20, this is it, I always had in my mind it was a 20 mile warm up for a 6 mile race, this is where it all happens and you can either push on feeling good or you can potentially bonk and run out of steam.  I decided to maintain my pace rather than try to kick on. It had all gone so well so far and I was still hitting my target pace, I would re-assess again nearer the last few miles.

Everything was feeling OK, the legs were still going and cadence hadn’t really suffered.  I was still hitting the magic ‘180’ so I was feeling positive.  So far I’d hit all the times for my mile splits, this was actually going well and to plan! I couldn’t quite believe it.  Mile 24 and I tried to pick up the pace. I managed to spot my other half, Andy at 25 miles, he looked surprised to see me as I waved frantically at him whilst I ran by.

With the last mile split ticked off on target, it was time to kick on to the finish; that was until I turned a left and was faced with a very unwelcome hill.  My last mile took a hammering, this hill was just mean! Head down, I just stuck in.  Up to the top and the hill fell away literally into a downhill – even better I spotted the big screen with the finishers going through the line and I realised this could be near the finish, a little further along and I saw the finish banner.  I don’t think I’ve ever sprinted so fast whilst crying at the same time as that moment.  I saw the clock and just had to get under 3’30.  Not really knowing how much time I had in the bank from the time it took to get over the start line.

Over the line and I just grabbed the barrier and cried from the exhaustion and, realising I’d done it!! I’d finished the marathon and I’d gone under my target 3’30.  All the training had come in when I needed it.  What a feeling!  I walked round to the finishers area to find Alasdair and Chris Sumsion where we shared our experiences of the race.  There was just one more person I wanted to see, Dave Rowe.  Dave and I have come on a bit of a journey to get to this day.  Dave too had recently suffered injury and has defied all medical science by running again pain free.  We’ve both come through the other side from injury and for us to be making our return to the marathon at the same race, it was quite surreal.  We are medical miracles!  Dave had an absolutely cracking come back race and on the back of 5 weeks training (training plan coming to an online retailer near you soon) to get his 3rd quickest marathon time ever.  Dave Moir was nowhere to be seen, we decided he must already be in the pub!

So later on that day, whilst sipping my shandy, I got thinking – I decided I’d hit my goal and I could take it easy at London next year, just take in the atmosphere and enjoy it.  2 days later and I’m now sitting here, I wonder if I could get that sub 3’25 or maybe even a 3’20! Haha, it never ends…. 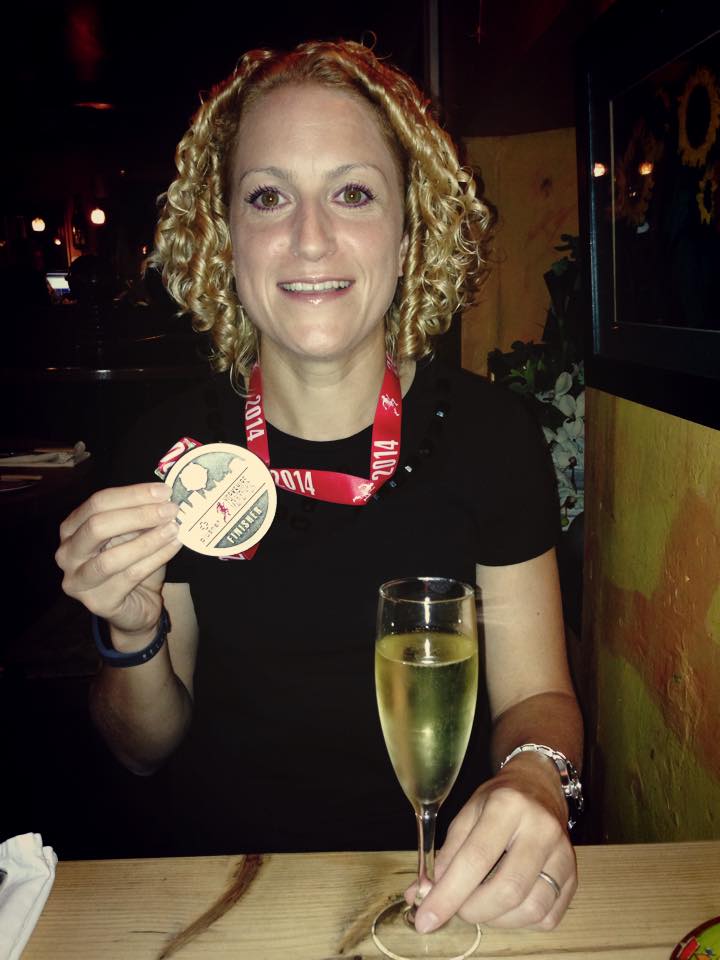 For anyone interested in the race, Channel 4 are showing highlights at 7am on Sunday morning (19th). I’ve got it set to record as I’ll be having that thing called a Sunday lie in!

Permanent link to this article: https://www.tynebridgeharriers.com/2014/10/15/2014-yorkshire-marathon-race-report/