He’s TBH’s very own tabloid hack, Keith Rooney revels in the confusion, banter and needle of another superb night in the north east running calendar.

And that’s how it started. A conversation with Graham King at club, when he brought up that little matter of the Clive Cookson. It had clearly been on his mind, as on mine. I’d grown fat on PBs this year, but was hungry for more, as was he. The idea was simple: run it together; match each others pace, push each other on. Brilliant! I couldn’t think of a better running partner. I mean, Graham could sub seven minute pace the whole way, which should result in a fine new PB of about 42 mins. 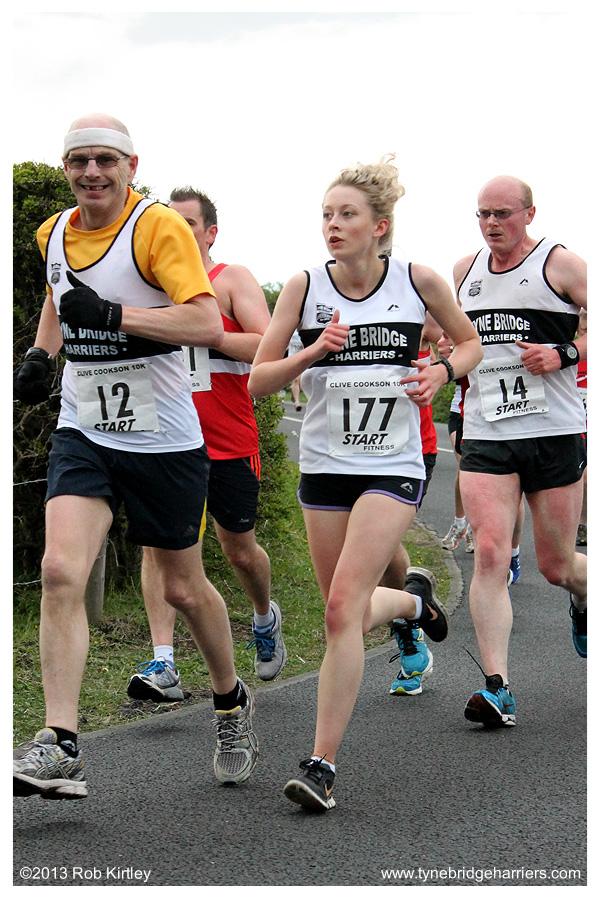 42 mins….. I was reflecting, standing before that rectangular hunk of metal called Monkseaton High School. The area swarmed with runners heading to the start. I always love the build up: the jumble of colour, the rich mix of liveries….. the needle. We’d barely spoken a word, I mused, as we moved through the pack. We were well and truly in the zone. Megan Parkin was also joining us; a good athlete, she was eyeing up 42 mins as well.

The nerves, the adrenalin were as palpable as the sweat glistening on the finely toned torsos roundabout. Then this juggernaut of runners lurched into action…… and abruptly stopped with a shuddering thump. Somebody crashed into the back of me and I hit the runner in front, who promptly lurched to one side, I caught a flash of black and white on the ground, one of our runners had gone down! I veered to one side, only to narrowly avoid hitting a parked car, then got stuck in a bottle neck of runners, who had somehow squeezed themselves into the gap between the car and a garden wall. Frustrated by the momentary lack of momentum, I was finally relieved, when the pack took a sharp left into the housing estate, breaking and fragmenting to avoid parked cars, then reforming and diverging once more. It had been a bumpy take off and I was glad to hit the off-road bit. Avoiding parked cars and veering around unsuspecting pedestrians, who threatened to be caught up in a swirl of runners, if they stepped outside their front gates, was, honestly, ludicrous.

At least I’d avoided the mistake of last year of running off the back of the pack, however and finding the off road track congested with runners. I checked the garmin 6.50 pace. Good. Thankfully, the twisting tribulations of the country lane didn’t seem to slacken our pace either and we veered onto Rake Lane. It was a good mile down hill and we’d agreed on a pace of 6.20ish. I managed that, but my God, Graham was stretching the lead. It’s the most remarkable thing about him, he doesn’t seem to run; he shuffles, yet manages to eat the ground up at an alarming rate. I couldn’t keep pace and decided to keep it at about 6.50ish.

The second lap was a blur. I barely noted the turbulent sky, the hedgerows bursting into life again after such a long winter, or even the irate local on Rake Lane unable to step outside his path for fear of being carried away in a whirl of runners. There was only the blur of the ground beneath my feet, the sweat stinging my eyes, the constant straining to catch a glimpse of Megan and Graham… and of course the Garmin. Graham was lost to sight, but I was in touch with Megan.

That second time down Rake Lane turned into a madcap dash: a small chap in a red top had shadowed me the entire second lap. I’m proud to say, I held him off. He heartliy shook my hand at the finish; and another guy, I think a Heaton Harrier, pushed me into a sprint that final half a mile. I was glad of the competition, because my time: 42.30ish is, I think a PB of about a minute. Well done to Graham King; no offence, but for a guy of his age to run the way he does, is quite remarkable – a true warrior; and Megan, a PB of 4 minutes, what an asset for the future. And of course my other fellow group 3 comrades: Lucy Matheson and Stuey Dickson, both of whom PB-d handsomely. But I have to admit, my abiding memory was of a giant of a man, who took it upon himself to stand astride the finish line, haranguing us as we came in. Yes, the unique, the One and Only, the sonambulistic Scot: The Allmighty Mack. I tumbled across the finish line with the words “Rooney move your arse!!” ringing in my ears.

Permanent link to this article: https://www.tynebridgeharriers.com/2013/05/23/clive-cookson-10k-rooney-race-report/