One of the club’s newest members, Alex Battersby, reports from the splendour of Alnwick.

The Les Allcorn 10k takes place in the grounds of the Hulne Park in Alnwick courtesy of the Duke of Northumberland. It is named after a local runner and is not a remnant of the French invasion as I thought! Although say it with a French accent and it makes a bit more exotic!

This is a single lap course which is mainly run on gravel and uneven paths so means it probably isn’t the course if you are going for a PB. The first 2 miles include some reasonable climbing before the course flattens out. The reward for making it to the top though is the most fantastic view over the grounds and surrounding area making you feel you are on top of the world! And then of course the real reward, a lovely descent for the next couple of miles before a flat finish.

This year it was a beautiful evening for a run and 3 TBH runners were out in force! Mark Reynolds was the 1st TBH’er home in just over 42 minutes, with Julie Shaw and I representing the ladies in just over the 50 minute mark.

A great evening out was had by all. Although this was a tough 10k it is more than makes up for it with spectacular views, supportive marshals and beautiful weather! Viva Les Allcorns! 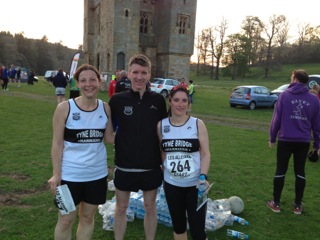