Ross Floyd, of host club Morpeth Harriers, got his year off to a perfect start by winning the 2013 Morpeth 11K Road Race.

Although 2012 was a fabulous year for Tyne Bridge Harriers, with the club winning numerous team prizes and several members picking up individual awards, in terms of my own achievements and race performances, it was, to be brutally honest, pitiful.

Don’t get me wrong, I enjoyed the majority of races I took part in; with the Great North Run, Amsterdam Marathon and Pier to Pier all springing to mind as unforgettable events. But in terms of performances, and more specifically race times, the only event that I can look back on with any contentment is the 2012 London Marathon, where I recorded 2h 53m. But even that was 3 minutes slower than my 2011 time, so maybe not so great after all.

However, with a new year comes a new determination to get back to the level where I was a few years ago, and hopefully start running times that in 12 months time I can look back on with some satisfaction. So to kick things off, I entered the Morpeth 11K Road Race.

Although it’s been going for a few years now, for one reason or another the Morpeth 11K was one of the few local races I had never ran before. And when I turned up at Morpeth Football Club instead of Morpeth Rugby Club for registration, the omens weren’t looking good. Thankfully it had just gone 11 o’clock, and with registration not taking place until 11:30, I had plenty of time to make the short journey across town and still be first in line for registering.

From the comfort of my car, conditions looked fantastic for racing, with bright blue skies and a bone-dry surface. However, stepping outside into a strong, bitterly cold, westerly wind proved otherwise, and the decision whether to wear a hat & gloves combo became a no-brainer.

Joining me in the race were fellow club members Dan Birchall, Darryl Davison and John Hurse, with Lizzy Clamp supplying the vocal support and carrying out the all important camera duties. After a quick pose (surely 2013 will the year of the T-Bot) it was down to business. 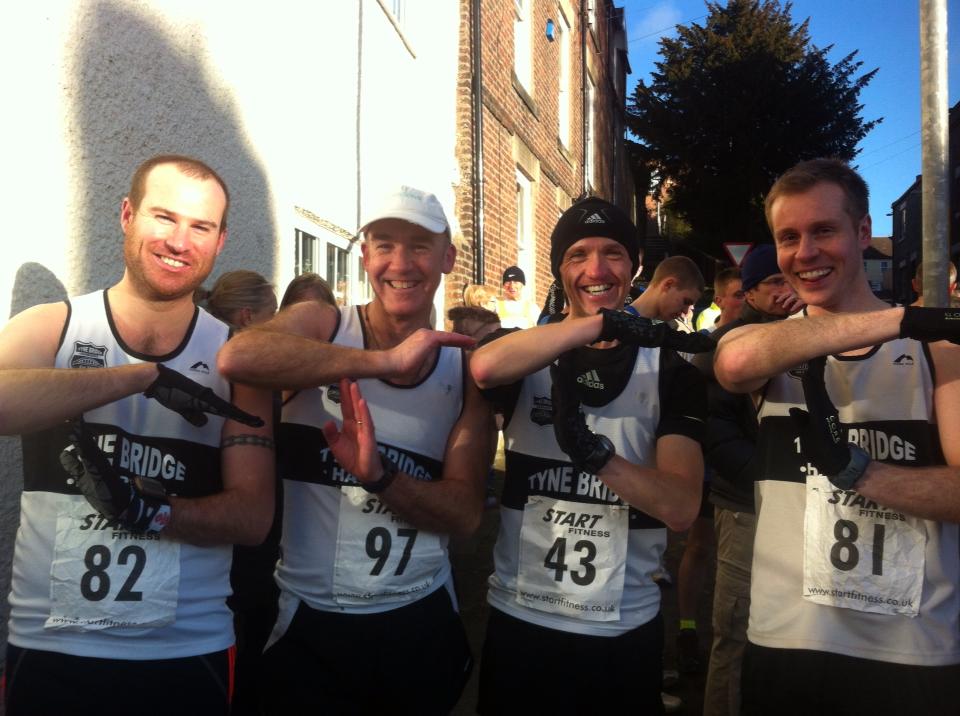 The race started on a slight downhill section, and because it ran along a narrow suburban road for half a mile or so, it meant the first mile passed relatively quickly (5:56).

The wind became more apparent as the route ventured into the countryside, and as I drew up alongside Darryl I could tell he was trying to gain some shelter behind a couple of lasses just a few steps ahead. I joined him for a while before realising the pace was a tad too slow for my liking and made my way to the front of the small pack. For the next 3 miles, the route winded it’s way along country lanes and up a couple of steep hills – which I’m ashamed to say I walked up on both occasions – before eventually reaching the point where the course turned back towards Morpeth.

Anyone familiar with the Morpeth 10K road race will know of the long, slow drag that makes up the first mile of that event. Well for this race, that same stretch of road is run in the opposite direction, and with a prevailing tailwind meant the race pace suddenly dropped like a stone. Whereas miles 3 & 4 were run in 6.29 and 6.31 respectively, the 5th and 6th miles were covered in 5.34 and 5.40. Whoosh!!

Having arrived at registration so early, and subsequently having plenty of time to kill before the race, I could jog the final stages of the route during my warm-up, and it was just as well too as I discovered there was one final nasty ascent about 800m from the finish of the race. Knowing this was to come, I eased off slightly during the final mile of the race, and approached the climb with vigour. Unfortunately, gravity won out again and I ended up walking the last bit of this hill too. (Note to self: walking up hills is acceptable during fell races, not road races. Get your act together).

The final stretch of the race, through Carlisle Park and then alongside the River Wansbeck, was an arduous affair with my legs feeling heavier and heavier.  But thankfully there were plenty of people out and about and their cheers of ‘well done Tyne Bridge’ were just the encouragement needed to get me to the finish, eventually crossing the line in a time of 40:36 (14th place overall).

Joining up with Darryl (who finished a few places behind in 17th) and Lizzy, we made our way back along the route and cheered in John (46th) and Dan (54th), both of who seemed delighted with their races. 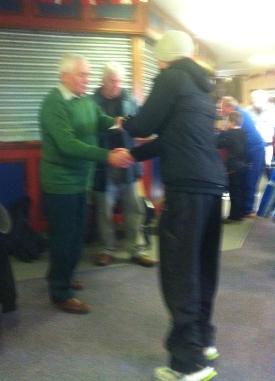 After a quick change into some warm clothing (hat, scarf, gloves, two pairs of pants, two tee-shirts and two jackets) I met up with the others in the rugby clubhouse, which was acting as Race HQ. Well what a surprise I got. The buffet put on by the members was simply sensational (see Lizzy’s report below) and would have been reward in itself for completing the race, but when Darryl informed me that I may have won 2nd prize in the V40 category as well, I don’t think the mood could have risen any higher.

Sure enough, my name was called out and I had the honour of collecting my award from the legendary athlete, Jim Alder.

Even if I hadn’t won a prize, the day would still have been a joy. Not just for the great company from the others but also from a good performance and possibly, just possibly, signs that 2013 may be the year I start knocking out some decent times again.

Many thanks to Morpeth Harriers for hosting a great race and thanks to Lizzy for her support during the race.

1st January 2013.
Watched David Daniels, Darryl Davison, Dr Dan and John Hurse take part in the Morpeth 11K Road Race.
-lots of choice of cake (coffee, ginger, carrot, flapjacks) and even home made sausage rolls.
I went for some salmon parcels and banana cake, Darryl went for the ginger. Great value at £1.30 for the lot!
DD opted for a cup of tea and piece of walnut & coffee cake. Just a pound for both.
Rating: 5/5 … Excellent choice and value. Great start to the race buffet year, setting the bar high!

A full set of results can be found here