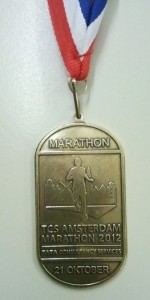 Following the disappointment of dropping out of a race, what you need, in order to make those inner demons disappear, is to enter another as quickly as possible. So, two weeks after my failure to finish the Chester marathon, I was standing on the start-line of the Amsterdam marathon, with the sole purpose of completing the distance.

With runners of all nationalities by my side, it was heartening to see one or two other British club vests amongst the pack, and as the race got underway it soon became apparent that I was in for a great day. The locals were generating an electric atmosphere, with as many cheers in English as there were in Dutch, and even though the number of supporters reduced slightly as the route ventured into the countryside, the vocal encouragement still provided the proverbial kick in the pants.

The one thing I’ve always been is a slave to the race-clock. How fast am I running? Am I keeping to the correct pace? But running without a watch was a new sensation. There was no pressure to meet split times, no guilt having to stop at water stations. Admittedly, there were times when the devil inside wanted to burst free and run hell for leather, but there would be no bitter tears during this race and I resisted the temptation to make a dash to the finish.

Reaching the half-way point would mystify me. Would I be nearer two hours or three hours?

Surprisingly, I reached it in 1½ hours and mentally told myself, ‘don’t change what you’re doing’. I was relaxed, running well and above all else I was having a cracking time.

Although the second half of the race headed back to the city centre, it was also into a fairly stiff headwind. But noticing a fellow competitor getting protection from a cyclist, I made my way alongside them to get some shelter too and made it clear, despite their looks of disapproval, they would never tear us apart.

There comes a point in a marathon where I stop counting how many miles (or kms) I’ve ran and begin counting how many are remaining. And reaching the 32 km marker was a massive physiological boost, knowing there were only 10 km (6.2 miles) to go. My legs were tiring at this stage, with my hamstrings particularly tight, but thinking about all my regular six mile runs did the trick and I got a second wind from somewhere, allowing me to push on and (as I discovered later) actually get quicker in the final stages of the race.

The marathon finished in the historic Olympic Stadium, with athletes having to run half a lap of the running track before crossing the finishing line. Entering the stadium, and stepping foot onto the track, was like going into the strangest party ever. I was aware people were jumping about and waving flags, yet in my mind it was eerily silent. I could see the finishing line on the other side of the stadium but everything else was irrelevant.

After what appeared to be the longest 200m ever, I eventually crossed the line and glanced at the big race-clock; 03:01:09. Having set out with the intention of just finishing the race, never in my wildest imagination did I think I could have run that quickly. I felt like jumping for joy but thought better of it, especially if I wanted to retain feeling in my legs, so decided to just keep walking back to the baggage stall to collect my belongings.

Half an hour later I was in Schiphol airport, listening to my favourite group and basking in the afterglow of my achievement.

Who was I listening to?