Woah!! When you’ve being running for as long as I have it’s not often you come across an event that blows you away, but today’s Middlesbrough Tees Pride 10k Race (sponsored by SABIC) certainly did that. 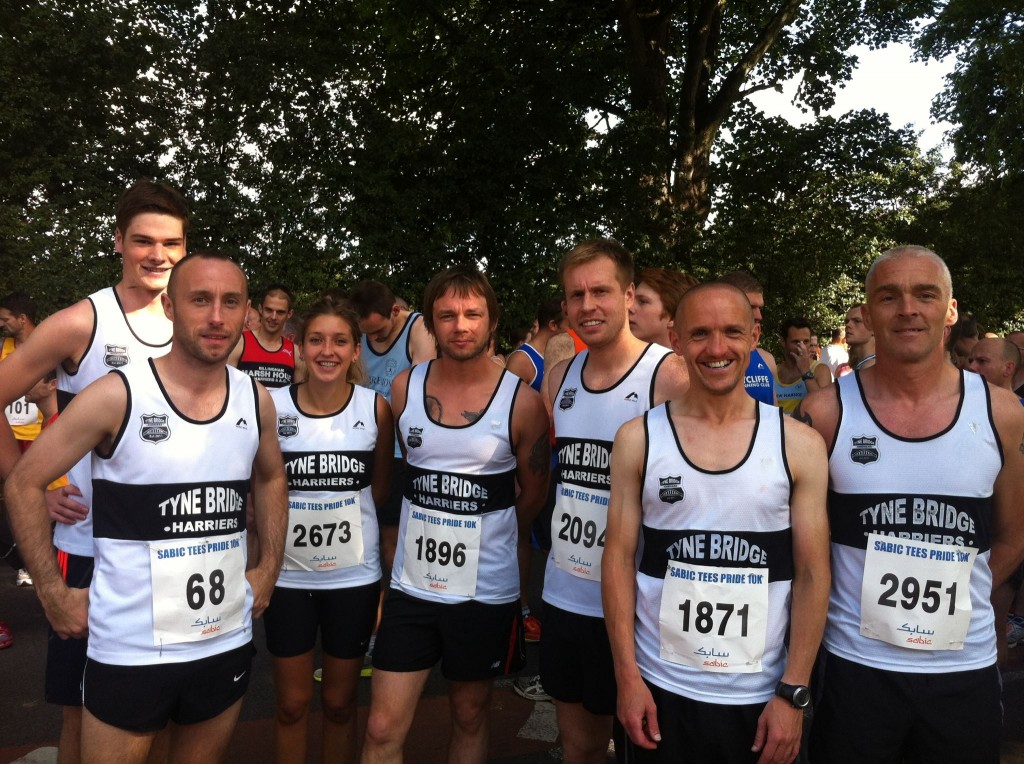 Tyne Bridge on the start line

Kenny Mac sends in his report:

The build up wasn’t ideal, a week of little mileage substituted with Aqua Running and no exercise for two days before the Sunday race due to a glute injury.

Incorporating the ethos of Tyne Bridge Taxis I cobbled together a motley crew of athletes to pile into the legendary VW Passat with 206k on the clock. 9am pick up in Wallsend to collect DD and Big Ron then through the tunnel and onto the A19 to collect Niggly Kevin Jeffress in Seaham.

The chaos started here, I took the wrong exit from the A19 and this culminated in me fartleking up and down the Motorway to find the correct exit. After eventually picking up Kevin we arrived in Boro with half an hour to spare.

We parked outside the zone and made the long slow walk to the start line, en route depositing our bags with the organisers. 15 minutes left to the start.

A toilet hop was next on the cards and we headed towards the temporary plastic huts parked like Chessmen in a corner of the race HQ. The queue was like Northumberland Street on Boxing Day. Honestly if you waited for your place you would miss the start of the race.

We found a quiet spot but I NEEDED A QUIETER SPOT for my ablutions so I wondered into the woods to find a discreet spot. Eventually I went near to the front of the race to see the Wheelchair even take off. 5 minutes to go.

No warm up, no jogging, lax training the week before, could I pull it off. Well the short answer was no.

Off we went, Joe Turner, Kev Jeffress and I were in a bunch together. David Beech was storming ahead in front. 1st mile for me 5.35 but instead of feeling strong I was struggling.

After 2 miles Joe Turner was edging ahead and Kevin Jeffress overtook me, I could not fight back and wanted to pull out but I have never not finished a race and wanted to show respect for the runners around me so they would beat me fair and square.

The heat was stiffling, three water stops and I fuelled up at every one.

The course, by the way, is flat, fast and amazingly supported all the way around. All credit to Middlesborough Council and Cleveland Police for organisation and road closures which in this day and age is no mean feat.

Anyway back to the race and my mile splits were deteriorating by each increment. Eventually I finished in my worst time since 2009, 36.39.

We were soon joined by Darryl Davison who pb’d by nearly 30 secs in 38.25 and Sophie Marr who finished 14th lady overall in 41.33. It was also great to see Dave Young racing again since his Marathon.

A team photograph was quickly organised by resident photographer Lizzie Clamp before we headed off North again.

Special mention to David Beech who ran 35.16 for his first 10k in TBH colours and to Joe Turner who pb’d by 1 SECOND.

Lessons for me from today are plan your journey better, know your pick ups, get there earlier and make sure you know where the unoccupied toilets are located.

Not the best preparation for the GNR or for Belfast in November but for anyone that knows me well I will learn from this and come back stronger. 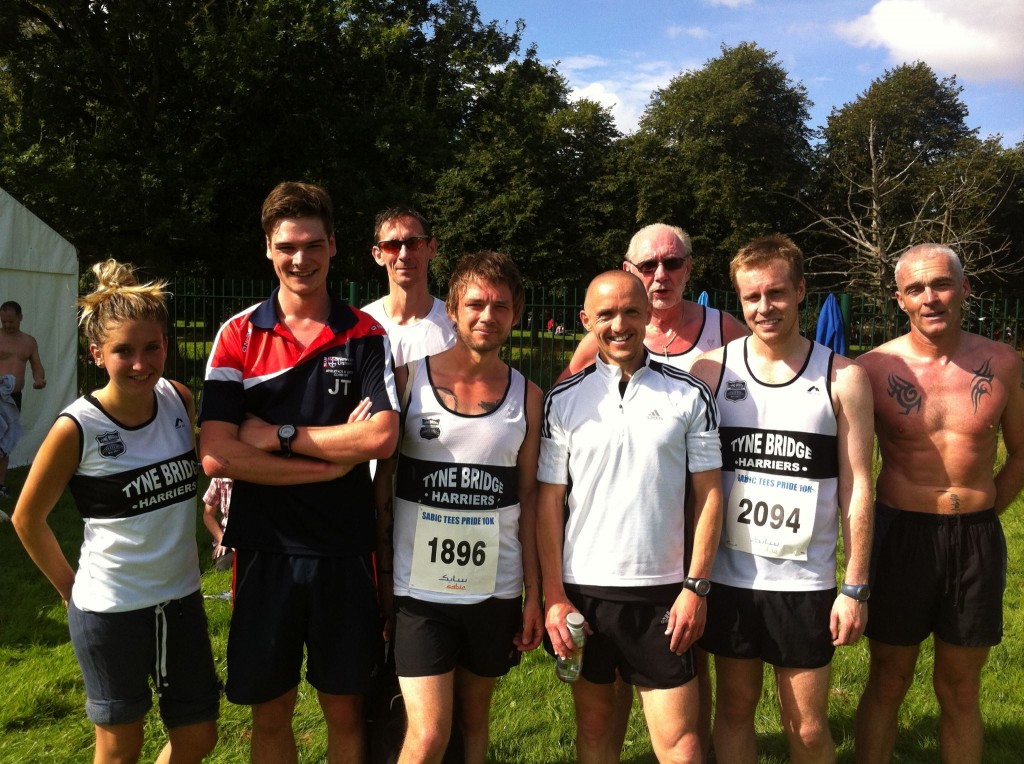 Soaking up the rays.

Many thanks to Lizzy Clamp for the great photographs.

Permanent link to this article: https://www.tynebridgeharriers.com/2012/09/02/middlesbrough-tees-pride-10k-race/