Here we are at Dave #8 and with only 4 more Dave’s to go to the BIG Da(ve), to-daves dave is Dave Rowe 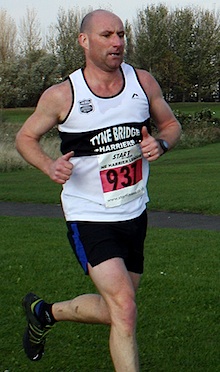 I started running when I was at school doing x- country and 1500m, as I got older the distances became shorter until I was running no further than 400m. When I was old enough to enter public houses the running stopped, I did do 5 GNR in my late teens/early twenties with little or no training, just one of those idiots who thought I could rock up on the day and run 13 miles. So from age 22 until I was 36 no running.

I then entered the GNR again, a bit more training but still no sub 2h 3 years ago this very month I was challenged by a so called friend to run the Edinburgh marathon the following may, I entered and started my training. I was doing 25 miles a week which I considered pretty good for someone who hated running.

In March 2009 I joined my first club and was bitten by the running bug. I love running now and would run everyday if the old legs would allow.

I’ve now done 6 marathons and look forward to each one like it were Xmas, very sad I know! my favourite race is the North Tyneside 10k, I don’t know if its because its on Easter Sunday or because its normally blessed with good weather (it did snow about 4 years ago) but the atmosphere is always a bit different.

My aims for 2012 are to run a sub 40m 10k, to see the club continue to grow and hopefully compete in the javelin in one of the track meetings, throw 30m and not embarrass myself or my coach/mentor Mr Shades Kirtley.

may I wish you all a very merry xmas and successful new year.

In the words of Sir Brucie and Tess “keep running”

Permanent link to this article: https://www.tynebridgeharriers.com/2011/12/21/the-12-daves-of-christmas-8-dave-rowe/