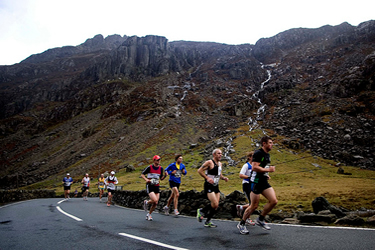 A few months ago, me and a couple of friends decided that running the Snowdonia Marathon was a good idea. I’d ran the race once before and swore at the finish line never to run it again.

Anyway almost four years down the line I found myself back at the start line. My preparation for the race had been great and although I felt like I was carrying a little extra timber, I knew I was running well.

I travelled down to Liverpool on Friday afternoon, the train journey at best was tedious before meeting up with my two friends and drive down to Snowdon. We spent the night in a cracking B&B, the Bron Menai, on the outskirts of Caernarfon, famed for being a multiple winner of the prestigious Christmas Lights competition and first prize in the Top Garden competition. Unfortunately we had arrived a month early to see the wonderful lights but the garden was looking splendid in the dull glow of Caernarfon’s street lights.

The nights sleep wasn’t the best mainly down to leaving a window open all night, I remember thinking at about 5 o’clock in the morning, “i’m going to have a word with them about their central heating otherwise there is no way I’m coming back in December to see these bloody lights…” Anyway, 7 o’clock came around and we made our way downstairs for a delightful bowl of porridge. By this time I was a ball of nerves and had it not been for the porridge and some decent banter in the car on the way to the race I would have been in no state to start the race.

The race itself got under way at 1030, the weather was something else, heavy rain and winds, we were soaking through before having taken a step. I’d positioned myself bang in the middle of the field with the intention of taking it as easy as possible over the first 5 miles. The first mile of the course is pretty steady but the three after go uphill to over 350 meters. I felt strong on the climb up Llanberis pass and was passing people with ease, the climb suited me, it was steep but consistent so I could get into a bit of a rhythm and stick at it. Just after mile four the decent starts with about 1 mile on the road before a few off road on slippery trials. On the way down I made a remark to a chap sporting a 100 marathon club t-shirt about the weather, it was hear where I received some cracking advice and set the tone for the rest of my race, he said “with weather like this, the best thing I find, is to run the race as quickly as possible” so with those words in my head i decided to push it as hard as I could for as long as I could. 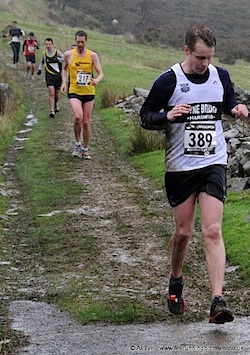 The miles through to half way were simple enough and I made it through the half way point at 1.39. I had decided before the race not to run with a watch but to make a point of asking someone at half way and 20 miles for the time. This was well inside what I was aiming for and gave me a fair bit of belief for the rest of the race. From mile 13-16 she goes up again, I couldn’t remember this climb from the last time and it caught me a bit by surprise. I was still running strongly and went past runners with ease on the climb. From 16-21 were again ok, and I went through 20 miles at 2.36, again far quicker than I had hoped for, for some reason I had visions of Kenny running past shouting about being a trojan or riding a chariot or something.

At mile 21 things started to get a bit dicey, I held on up the climb to mile 22 but after that it was game over. The climb at 22 is a right pain, its steep, off road and never ending. The rain and wind plus the climb and the 21 miles in my legs before it made this last part of the race the hardest thing I’ve done. I dug in and settled for trying to pick a post in the distance and ‘run’ to it before having a bit of a power walk and the starting it all over again. After what seemed like an age I made it to mile 24 and the decent began, luckily all the other runners around me were in the same boat. The decent is horrible, worse than the climb I’d say and as I tried to push on past a couple of runners, I missed my footing and slipped in the mud ending up on my side sliding down the hill. It took me a minute or two to sort myself out but I got back up and carried on finally finishing the decent and making it to the finish, crossing the line at 3 hours 34 minutes.

The whole race seemed to fly over and I couldn’t believe my time, before hand I had set a target of beating my last time around the course of 4 hours 1 minute. My chip time moved me down to 3 hours 33 minutes 41 seconds. A big thanks to all at TBH for the coaching and training over the past few months, it definitely got me through the darker sections of the race.

Permanent link to this article: https://www.tynebridgeharriers.com/2011/10/31/snowdonia-marathon-race-report/