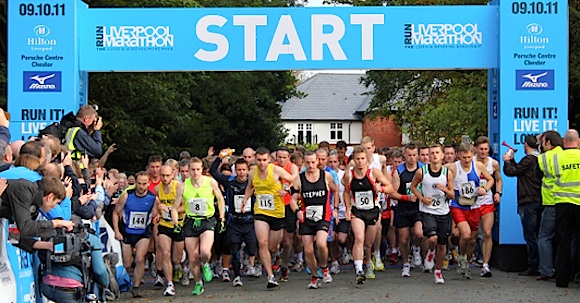 After failing to make it to the start line of Edinburgh Marathon earlier this year through injury, I was hit with jealousy to see everyone setting off from the start line when I went up in May to support 2 friends and fellow TBH runners taking part in the event. I decided I wanted to get a marathon in before the end of the year and October seemed a fairly reasonable date to aim for. Liverpool was getting a lot of publicity as it was making a comeback for 2012 after an 18 year absence from the race calendar. Knowing I would miss a fair chunk of training from summer commitments, I thought I’ll give it a go and do as much as I can. Summer training went reasonably well and October 9th seemed aaaaaages away but then as is always the case, the final few weeks flew over and race day was upon me. I travelled down to Liverpool on the Saturday afternoon, trying to take the day as easy as possible, though feeling quite nervous. On arriving at Liverpool though and meeting up with friends already there who were also running, the nerves seemed to disappear that night and even on the morning, still at the hotel, I didn’t really think about the marathon. Probably should have taken that as an early warning sign it probably wasn’t going to go very well…

A quick 10min train journey from Liverpool Central and a 5 min walk and we were at Birkenhead Park. The weather at this point was quite nice, the forecast 22mph winds hadn’t turned up… though it was still quite early. I realised later that morning, I was being a little too optimistic on the weather. We ditched our bags and went over to the start line ready for 9.30… the claxon sounded but no one moved.. no announcements, just rumour about what could be the problem – ranging from traffic management issues to risks of riot in the local area!… then the clapping then the chanting… still no idea what was going on. I was chatting to guys around me at this point and unfortunately the distraction killed any nervous energy that would have had me raring to go…. Finally at 10.10 we heard another rumour it was a 5 minute warning and we’d be off at 10.15. By this time, I was ready to go home. We’d all had enough! I’d completely switched off in the 45mins of standing around! There was one small snag on that though – my bag was on its way to Liverpool on a bus – if I wanted my gear back, I’d have to run 26.2 miles to get it.

10.15 and the gun went. Over the time chip mat and still not really into a good pace – we were all very hunched up, trying to get down a very narrow park path. I was feeling annoyed – they’d messed with the start of my race with the delay and they had now ruined any chance of getting into a decent pace to get me off to good start. My mind was starting to turn against me. I also decided I now needed a toilet break after standing around at the start. So into the 2nd mile, I decided a 10second pitstop at this point would be a better option than much longer spent in discomfort. And from then on, I never really did get into my pace.. even at mile 5 or 6 with a bit of downhill, my mind never really switched into gear… we’d all spread out at this stage so although a clear path, the hills and the strong winds just kept on coming. We ran down to the river, took a left, up to a roundabout and then back down and back where we had just come from. By mile 10 we had done an out and back course, quite soul destroying to see that we had gone all that way to come back to where we had started. We were running into strong winds at this point and my cap was blown clean off my head (I’ll no longer be able to sport the matching cap and vest lumo look, Piers!), I’m quite in the habit of running with a cap, so felt I’d lost a key piece of equipment at this point! (Although the bonus here is that it now means a trip to start fitness for a new cap. Woo hoo! )

I was suffering with stomach cramp or a stitch in my lower stomach quite bad by this point, and it was my first excuse of many to stop and walk. A fatal mistake so early. Stopping so soon in the race meant there would be many more opportunities to come that I would be stopping. And there were.

We then ran into the Tunnel, this was by far the best part of the course, the only straight part of the course that I remember and even better, no wind. It was so easy to get into a good stride. The peace and quiet and only the drumming noise of the feet behind, together with “…oggy oggy oggy, oi oi oi…” coming from the group far behind. The climb out of the tunnel took forever… but at the end of the tunnel was a steel drum band. Amazing – it was like you were getting sucked out by the beat, was very hypnotic. It definitely worked though, I sprung out into daylight to the biggest crowds and noise. It was great. Into the city centre and the streets were lined with shoppers. Quite a sight and it trumped any kind of support I’ve ever seen in a race. I wanted to stop again, still plagued by the stomach pains and the demons in my head telling me to stop and go home. I managed to run into the side area and walk for a bit. By now we were about 13/14 miles in and heading for Sefton Park. As I was on my way to the park though about 16miles, the lead runner was already heading for the finish line. Sefton Park was a good 9 miles of the race, so it was quite soul destroying to see he was already done and heading home for a brew. The course then took endless paths through the park, out again, back in, into another park, back in… and all around were runners but it wasn’t clear if you’d ran that bit already or were about to. Not good! I never want to see Sefton Park ever again. I have seen quite enough. Out of Sefton Park and… into another park! Noooooooo! Pitched as the Long and Winding Road Race, they definitely got that bit right.

It was a relief to see the 20mile mark, at this point, I knew I was capable to run 6 miles and I could start working out in my head how long it could take me to get back. At the last water station at 24miles, I decided that was the last water station and therefore I had no more reasons to stop and walk ( I had used pretty much every other water station from 14miles onwards as an excuse to stop). Legs were aching now and I just wanted it over with. Onto the home straight with a mile to go and the rain started, the wind had also picked up since leaving the shelter of Sefton park. the last mile was spent deciding what my first drink at the bar would be… wine wasn’t going to last long enough and would probably wipe me out… decided on a pint – oh, no, that would probably do the same… shandy it is. Over the line, the relief was unreal. That was the worst sporting experience I think of my life. Such a contrast from how much I had enjoyed my first marathon at Edinburgh in 2010. So, I can take two things away from this race – I have seen enough of Sefton Park to last me a lifetime and having experienced the agony and pain of Liverpool, I know it can only get better when I do the next one in 2012

Permanent link to this article: https://www.tynebridgeharriers.com/2011/10/16/liverpool-2011-marathon-report/