Much quieter turn out for the TBH juniors at this fixture, with the seniors actually managing to match our low numbers this time around.

Our first event with runners in was the 200m. David Carr’s first attempt at this, resulted in him setting a very respectable 32.27 PB and claiming the U13 club record. Zak Kettle was just ahead on time in an earlier heat running 31.59 and lowering his own record by over a second. 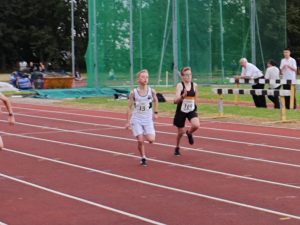 Next up was Fraser Bigg in the seeded 800m race (the U17s run with the seniors). This was his first running of the distance, and he also set a very respectable 2:35.02 for himself

Very little to report on the food front, as I sorted my tea before I came out, and we were away fairly early, so everyone went back home to eat.

Permanent link to this article: https://www.tynebridgeharriers.com/juniors/negp-4-monkton-stadium-10-7-19/