We had a great turnout for TBH juniors, with 11 athletes competing at this fixture. First up were TBH’s newest signings, Joshua Bruce and Fraser Bigg. In their first ever competitive race, they were both thrown in at the deep end, as they were seeded amongst the senior athletes in the U17 age category. This didn’t phase either of them, and they both went into heat 5 full of suggested race tactics (apologies for my ramblings both, I thought it all sounded sensible at the time!!) and enthusiasm. Josh was first over the line for TBH.  He’d left his final sprint a little too late so narrowly missed out on catching the heat winner by a second or 2 in a very respectable 5:19.3.  Fraser followed in an excellent 6:04.3 catching several runners in the home straight. A great first outing from these 2, in an age category we have struggled to cover previously.

In between the field events, we had quite a few runners in the seeded 100m. In heat 2, Harry Snaith set a fairly short lived U13 boys record, shaving 0.2 seconds from Jake Moir’s existing one with a time of 15.8. David Carr posted the fastest U13 boys time of 15.4, lowering Harry’s time by a further 0.4 seconds, with Jake running just 0.1 seconds outside his PB posting a time of 16.1. Laura Whitman was the only U13 girl in the 100m, and was very narrowly outside of Hope Moir’s club record missing out by the narrowest of margins of 0.07 seconds, recording a time of 16.8 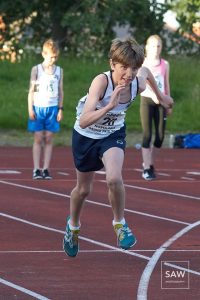 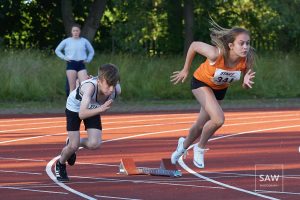 Finally 3 club records (sorry for all the additional work Ian Pickett!!) and several more PBs were set in the 800m. David Carr reduced his own U13 boy’s record by nearly 4 seconds, to 2:40.8. Jake Moir set a new PB, taking nearly 3 seconds off with a time of 2:53.6. Luis Nichol ran a very solid 3:25.0 and Harry Snaith 3:05.3, with neither of them having competed at the distance previously. Finally our only U13 girl in the 800m (Laura Whitman) posted a fantastic first time effort of 3:33.4. 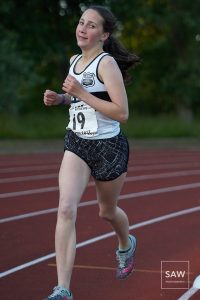 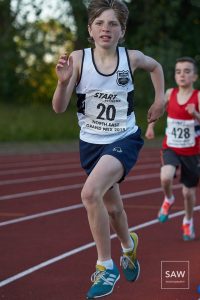 A similar picture occurred in the U15 category. Amber Maynard shaved 0.3 off her own club record, further reducing it to 3:06.9. Hope Moir ran 3:16.1 for a massive PB, taking nearly 50 seconds off since the last one she ran in 2014, and finally Zac Kettle took nearly 2 seconds off his own record, reducing it to 2.40.0

Luckily, I thought ahead, and gorged myself on a “free sandwich buffet” that was left over at work earlier in the evening, as a late finish lead to slim pickings for many of the juniors on the catering front. Some of the more savvy ones managed to sort out the odd banana, or packet of crisps, but the best effort was probably from Zak Kettle who ensured his father thoughtfully procured tuna & sweetcorn sandwiches with tomato sauce crisps as a side.

PS Thanks to Stuart for some fantastic photos.

Permanent link to this article: https://www.tynebridgeharriers.com/juniors/negp-3-monkton-stadium-26-6-19/