Well the records were claimed, broken and PBs were bettered in a really successful first GP track meeting for TBH juniors. The evening started around 12C and got just a little cooler, but the wind was fairly low giving us near ideal conditions for competing.

U13 and U15 events were combined based on a seeding system that relies on actual PBs (or estimates if athletes don’t have a PB) meaning quite a few athletes were in the wrong heats, but that didn’t seem to matter to our performances.

The first event we had people in was the 100m and 3 club records were set in that. Jake Moir claimed the first record in the U13 Boys category in a time of 16.0, with Hope Moir in the same heat claiming the U15 girl’s record in 16.4, then Zak Kettle following that up with a U15 boy’s record of 15.23 in the following heat. 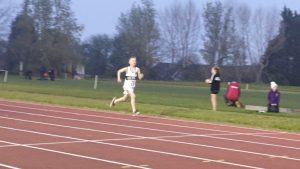 en went onto claim her second club record of the night, coming second in the competition and claiming 4.16m in the long-jump. This was an incredible increase of just under a meter (92cm) on her previous PB.

The final event we had people in was the 800m, and despite breaking the previous club record, Jake Moir was the only one who didn’t claim a club record, as that was claimed by David Carr in the same heat.

Well done to all, a great evening of racing.

Permanent link to this article: https://www.tynebridgeharriers.com/juniors/negp-1-monkton-stadium-24-4-19/