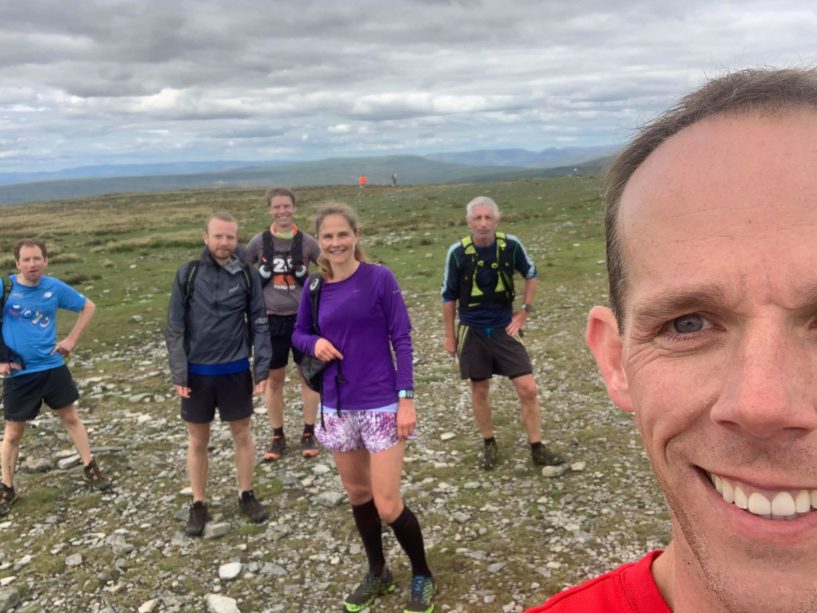 Lots of us are missing racing. I read with interest Matt’s re-evaluation of running (A time to reflect), and not so much why it’s important, but HOW it is.
And whilst I agree we can all become a little too obsessed with race times which ultimately don’t really matter, I think there’s another element in terms of the void left by the absence of competitive events. The sense of occasion. The planning, the butterflies, the travel to the event, the build up to the gun. But, as I discovered on a mild, pleasant day in Yorkshire Dales, it’s possible to create your OWN sense of occasion.
It was Ian Pickett’s idea. “Who’s up for doing the Yorkshire Three Peaks”? A group of six of us signed up for the challenge on August Bank Holiday weekend. “I fancy an early start”, I’d messaged to the group, urging punctuality of arrival in Horton in Ribblesdale, our base for the challenge. We agreed on 9am. Everyone was waiting patiently for me in the car park when I arrived at 9.20. (I had forgotten to turn off the A1 – easily done…. I had put on a Mercury Prize nominated artists playlist and was surprised to hear Stormzy actually singing rather than rapping and was in a bit of trance, until some lass came on warbling something folky about dolphins and rejection or something and I snapped out of it….  By which time it was too late and I was way beyond Catterick. And then got stuck behind a campervan for 30 miles).
So off we trotted. Ian led the way with Tom Charlton who, had he not had us holding us back, would have broken the course record. A Mountain Badger, whose name tag read “John Tollit”, The Darg Force (AKA Alison Dargie) and Chris Stockdale made up the rest of our party, and I must confess to some doubts about my ability to keep up with that elite level crew. All of which added to the aforementioned sense of anticipation and occasion. 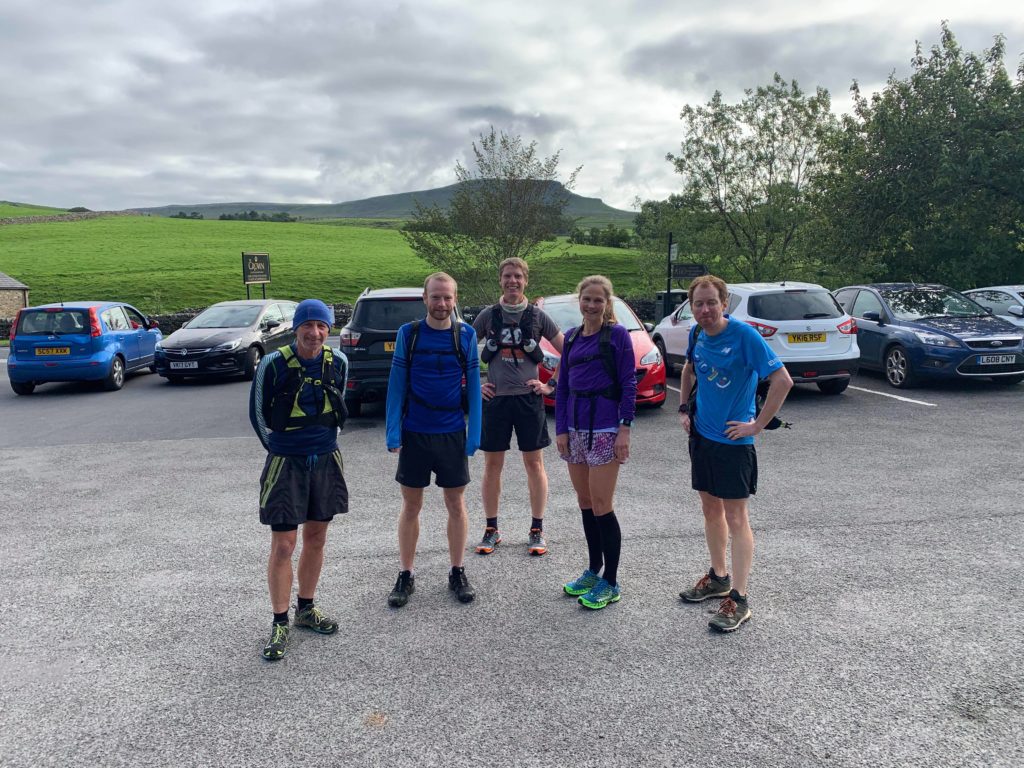 The 3 Peaks route has a couple of variations, but is roughly 24 miles. Our plan was to follow the course of the famous fell race. My navigation skills are pitiful but thankfully the combination of a well-trodden route and the company of people who actually knew what they were doing rendered irrelevant this deficiency. I always had someone to follow. And follow them I did into the first climb, which was soon upon us. Up Pen-y-ghent we went. It’s the lowest of the trio, at 694 metres above sea level. It’s also the easiest climb, but it didn’t necessarily feel it. The temperature was thankfully moderate, but by the time I panted my way to the summit along a pretty clearly defined path I was perspiring admirably. Tom was doing handstands and juggling at the top while he waited for the rest of us. A snack, a few pictures, and an examination of a clever app Ian had on his phone which identifies other visible peaks, and we were off again. We’d barely begun, really. The initial descent involved what was a pretty much sheer drop which Ian, Tom and The Badger somehow managed to run down. They were then off down the path, arms flailing, startled hikers stepping aside, sheep darting for cover. They vanished into the distance. My style was more akin to Schnozzle, our standard-sized, long-haired, shaded red sausage dog, descending the stairs.

At various points the quicker members of the group would wait for us to catch up. Ian would hold open gates and herd us through, before bounding on ahead once more. The route was busy, with many others taking up the challenge. The second climb (Whernside – 736 metres), loomed in the distance. But there was work to do, just to get there. We worked up a decent rhythm, as we navigated the undulations, and spirits were high. We passed a group of lads dressed in cricket whites, wielding bats. “It’s a charity walk”, one explained. They, too, seemed chirpy. Though I suspect six or seven hours later, as they clambered down the final peak, wearing bulky pads and carrying three pounds of willow, the novelty may well have worn off. 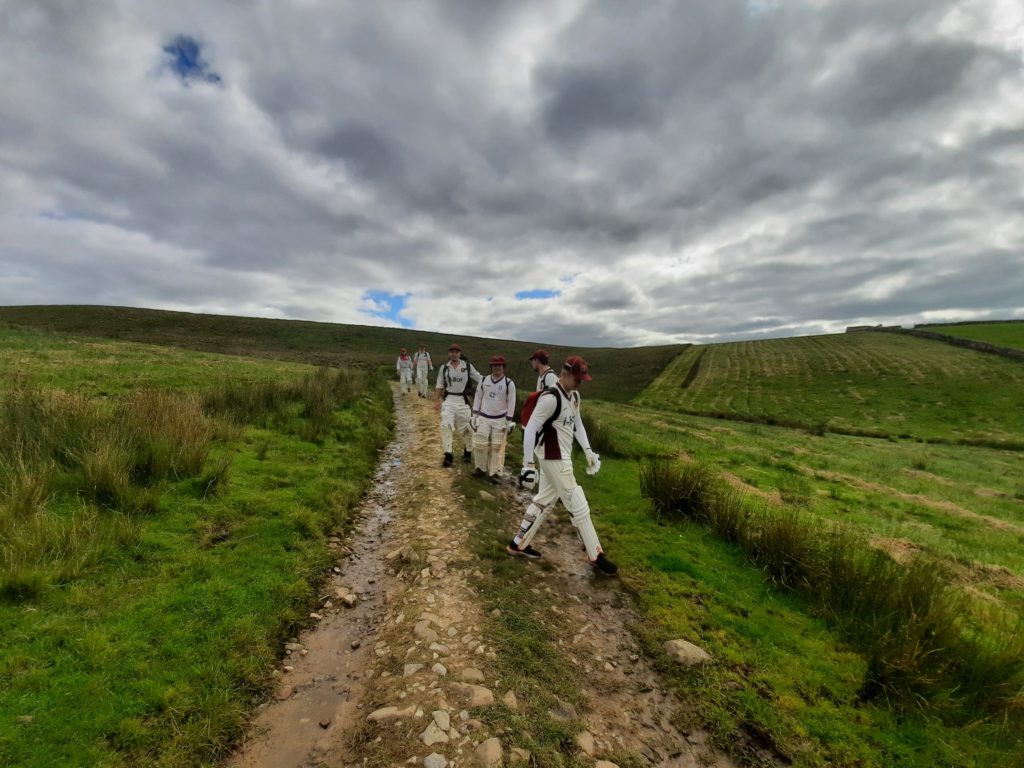 On we bounded. We went through a kissing gate. And then passed a small hut with “pumping station” written on it. “From a kissing gate to a pumping station…. That relationship escalated quickly”, remarked Alison. We’d covered perhaps eight or nine miles, and I realised I’d probably guzzled a little too much of my water. After all, we had two stern climbs and a good distance to go. This is where being in the company of a wily hill-weasel proves to be advantageous. John had stashed a couple of litres under a bridge near a road we had to cross. Off he scuttled to fetch it. Alison, meanwhile, had a supply of jelly babies. “Have as many as you want, I don’t like them”. Why did you bring them, then? “I panic bought in Lidl”.

Whernside now loomed above us. We ran alongside the extraordinary Ribblehead Viaduct, and indeed under it. “We need to cross that river”, said John. My eyes surveyed the scene seeking a bridge, or even stepping stones. The Badger leapt from rock to rock like a Pyrenean goat and landed on the other side with his feet drier than a Yorkshireman’s sense of humour. I tiptoed along the bank, slipped, and waded through. I have a lot to learn. 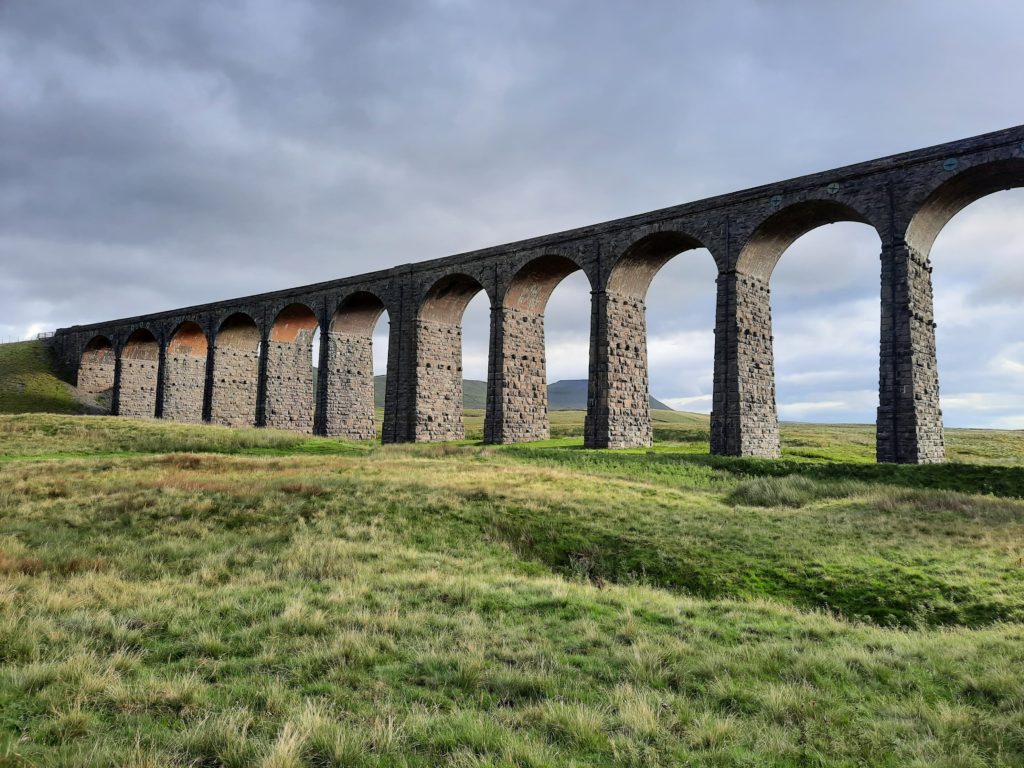 There is a path which takes a longer, gentler route to the summit. It adds perhaps a couple of miles on to the overall distance. But we were heading straight up. No path. Just up. Ahead of me, Ian and Tom disturbed a pair of tawny owls who’d been slumbering in the undergrowth, clearly not expecting a sextet of buffoons to plod through their normally undisturbed habitat. The climb became steeper, the vegetation sparser. I was on all fours, hauling myself up. I was like Alex Honnold in Free Solo, though admittedly when he reached the summit of El Capitan he didn’t emerge between a family having a picnic and a bloke with two cocker spaniels. The view we drank in as deeply as our water supplies. It was truly spectacular. We could see with clarity across to the Lancashire coast and, further north, to the Cumbrian fells. Scafell Pike and Helvellyn were prominent. To the south, the mountains of north Snowdonia were clearly visible. Closer, the rolling but nonetheless imperious Howgills, with their unique purply hue, caught the eye. And much closer still, loomed Ingleborough. Just one to go!

Vaguely refreshed and grouped once more, we began to tackle the descent. A flattish section first and then we plunged. Ian, Tom and John pretty much bounced down and had soon disappeared from view. The path was quite busy, and social distancing meant precariously springing from unstable rock to awkward sized step and hoping for the best. Most people offered words of encouragement, or acknowledged our thanks as they kindly stepped aside. Some, however, saw us as envoys of Beelzebub. One lady, her thighs as thunderous as her glare, stood firm and refused to budge. I screeched to a halt like a character in a cartoon. Her tut echoed down the valley as she begrudgingly shifted a fraction to her left to allow me to tentatively pass. I half expected a hefty shove to send me plummeting down the hillside, but mercifully I was spared. “Thank you”, I yelled cheerily, and stubbed my toe on a rock. After a flat section at the bottom, I was most relieved to see ahead the B6255. This was because here The Badger had another stash. Water bottles were topped up, and our heads tilted upwards to examine the task ahead. Far above, paragliders were hurling themselves from the top of Ingleborough. Our route to the top would not be the traditional one, due the temporary closure of the principle path there. 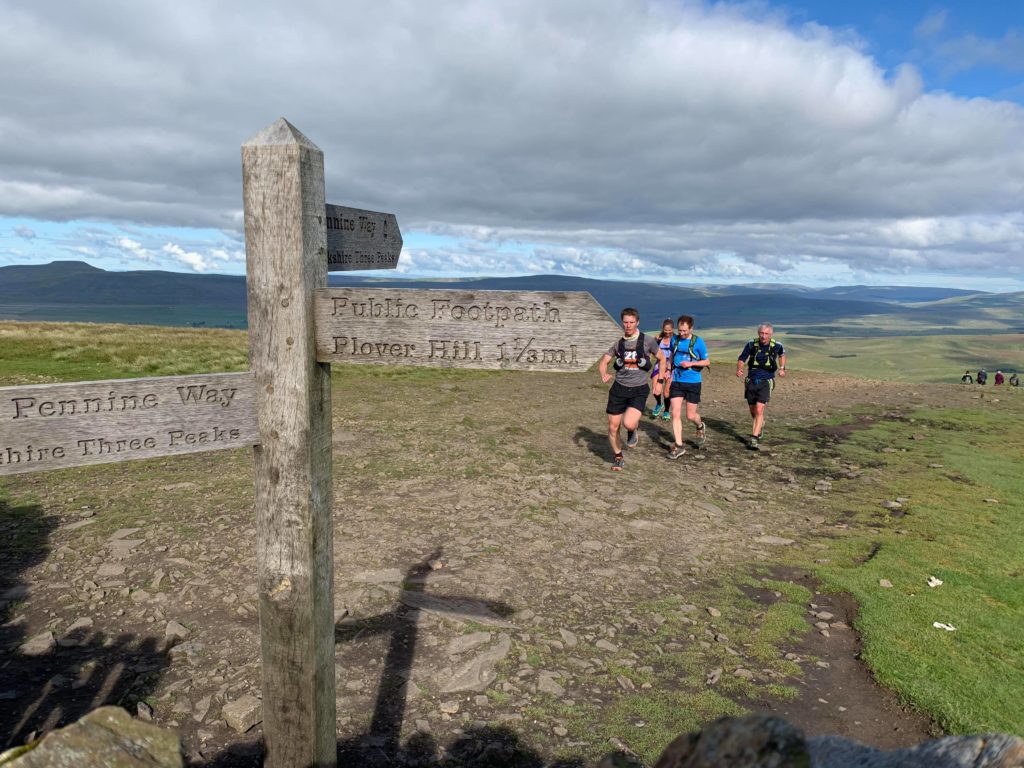 Our diversion took us on an ascent slightly further east. It was steep. So much so, Alison fell over just looking at it. Tom ran up it. By the time the rest of us had arrived at the top, he was on his third cigar and fifth glass of brandy. We then trotted half a mile across a ridge, up a final climb and across the barren, limestone summit to the actual peak. From here, we were once again treated to a phenomenal vista. Not only were the peaks of North Wales and the Lake District once again splendidly prominent, but we could also see beyond the Solway Firth to the uplands of Dumfries and Galloway. I hadn’t even been aware there was a point in England from which Wales and Scotland were simultaneously visible. I’ve since been told that on a good day atop Scafell Pike (I have never been atop Scafell Pike on a good day), you can also see Northern Ireland. And indeed the Isle of Man. A quick photo and a discussion on whether “pastilles”, as in Fruit Pastilles should be pronounced “pasteels” or “pastills”, and the final descent was upon us. The aches and pains were creeping in, but concentration was required for a tricky piece of scrambling before we rejoined the main path all the way back to Horton in Ribblesdale. We discussed our various injuries. The Badger’s hip was grumbling, as was my right heel. Alison tried to work out which bit of her hurt most, and decided on her right quad. Ian’s knee started playing up. But we were on the home straight. I opened a gate for Chris, who bounded through with the enthusiastic vigour of an escaped bull, and he was off. Alison also charged ahead. Tom had already finished and was contemplating going up Pen Y Ghent again as a cooldown. We ran the last few hundred yards together back to the car park, and ground to a satisfied halt. It had taken us well over five hours (the nutters who win the annual race there do it in under 3 – though they don’t stop to admire the view and discuss confectionary, I suppose), but a huge sense of achievement soon started to seep through our bodies along with lactic acid and whatever else makes everything sore. 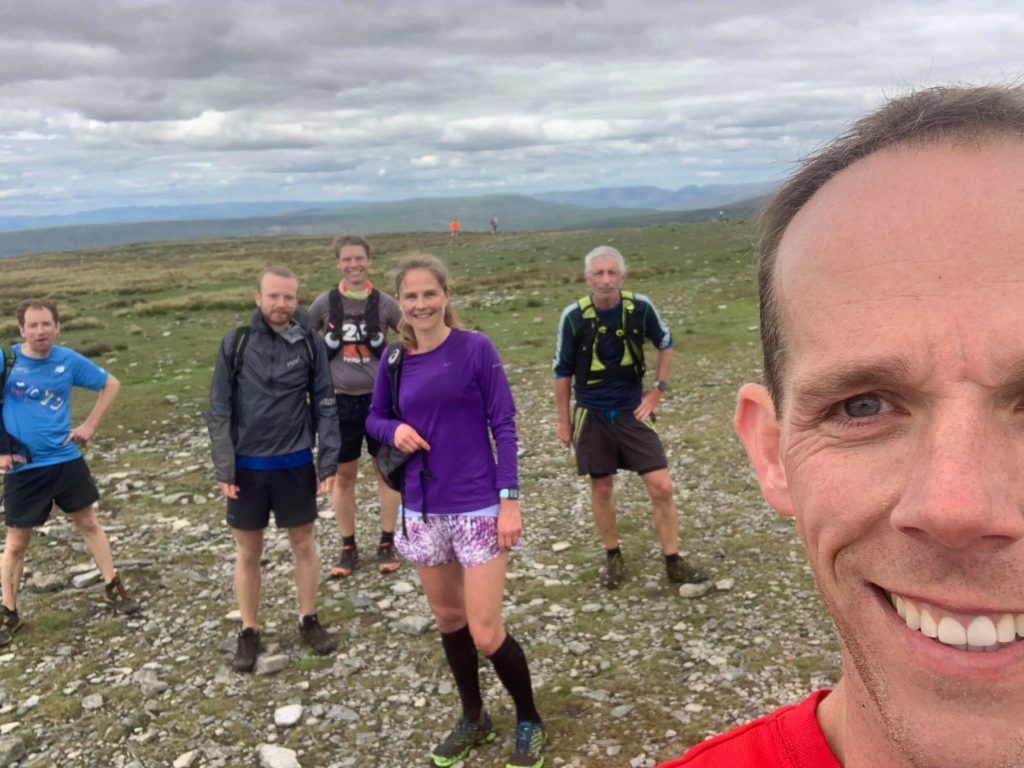 My final challenge was to drive home without getting lost, and then supervise a twenty-month-old’s bedtime, which, frankly felt as much of a challenge of doing the route again.

It was a wonderful day, and, if you’re missing the buzz of race day, or just feel like challenging yourself, I’d thoroughly recommend such an excursion, wherever it might be. What’s next, Ian?

Permanent link to this article: https://www.tynebridgeharriers.com/2020/09/09/yorkshire-threes-peaks-race-report/