This had been the only race of any creed in my diary since late February and as the date grew closer, I wondered if it might fall victim to the local lockdowns that are ramping up in the North East. No such luck: with a week to go, I received my number and map in the post and actually let myself get a little bit excited!

Despite having very little else in the calendar, this did not translate into any form of pre-race organisation. I spent the morning flapping around looking for my TBH vest, waterproof trousers, safety pins, all the things that I could absolutely picture in my mind’s eye and are normally littering the house, but have been a bit redundant of late. This resulted in a slightly tight departure, but I told myself I was being a good citizen by not arriving a minute early and breathing all over the village of St John’s Chapel.

After accidentally trying to park in the middle of a sheep market, I hurried to the old start line and was sent up to the actual (covid-secure) start, a couple of minutes further up the hill. Excellent, I thought. Less of this uphill nonsense. There was a risk that the first bit could be considered “runnable,” so I was glad that had been dispensed with. I met the rest of my 10:10 bubble (we were a five – someone from Swaledale had apparently forgot it was happening) and we made the usual murmurings about what a lovely day and how it was great to be racing again. We’d received a last-minute email from the organisers that morning, warning us of -6°C with windchill at the top so everyone was wrapped up in most of their emergency kit and even more twitchy than normal. 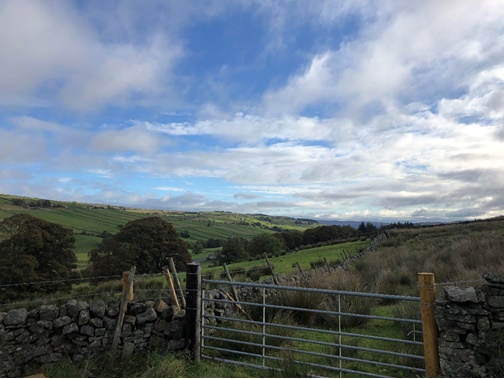 The view from the cloud-free start

Off we went! Three of our pack were clearly very into this “running up the hills” malarkey so they gained a decent head start on the farm track. I was feeling the benefits of a few weekends in the Lakes and Cairngorms over the last few months and managed to keep them in sight until we got to The Gate. After that it was every man and woman for themselves as we entered the featureless moorland of Weardale. I had actually been up and recce’d the route last week, which might seem a bit absurd for a four mile race, but I was a bit worried that a) the top is completely unmarked and featureless, b) setting off in groups of six, ten minutes apart, meant that I couldn’t rely on being able to see the runner in front and c) there’s really very little else to do with your days at the moment. Despite the weather warning from the organisers, visibility wasn’t as bad as I’d experienced before, and you could vaguely make out the false summits to give you something to aim for. “Up and South” were useful directional tips. 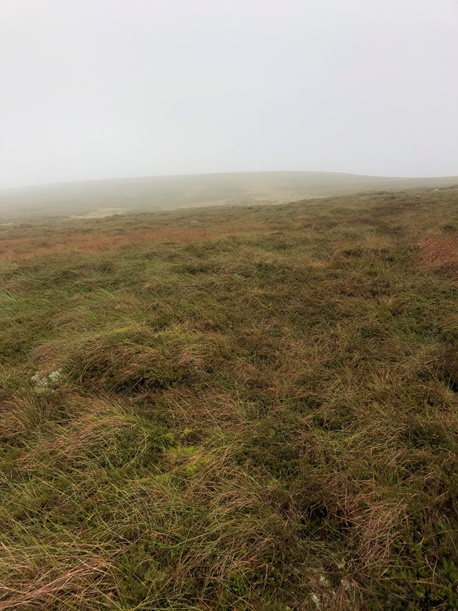 The terrain is hilariously unpleasant – nothing but tussocks, bog, marsh, peat hag. A benefit of this is that it is nigh on impossible to run and you just have to focus on keeping yourself upright and notionally moving forward. Ian and I discussed this after the race: going up you can’t imagine being able to get above walking pace even on the descent! I hadn’t seen any runners (going up or down) for quite a while, when about 1.5 miles in I saw some enthusiastic arm-waving shapes from the 10am start group coming over the shoulder of the summit plateau. This reassured me I was still on course (Up and South were working well) and it was time for the final maze of bog and Claire-high peat hags. The fog was thick here and it was really eery seeing runners to-ing and fro-ing amongst and over the grassy lumps. The top was comparatively busy as I passed the faster group from my wave and a few stragglers from the 10am wave on their return journeys.

Cheery marshals greeted me by name as I used the summit cairn as an excuse to re-tie my waterlogged shoes. Then it was time for The Good Bit – going down! Contrary to how things had seemed on the way up, gravity triumphed and it was possible to run back down over the tussocks. My eyes were tearing up from the wind, which added a bit of a foot-placing challenge, but luckily marsh is very soft to fall on. As the cloud cleared to show off Weardale’s rolling hills, I caught a couple of people from the 10am wave and narrowly avoided heading too far West. Ian (Pickett) from the 10:20 wave flew past me at this point – I was quite pleased that my ten-minute head start had lasted that long to be honest! Eventually we were back at the gate and onto the track to the final descent. Inspired by Dave Moir’s route-finding a couple of years ago, the race now actually finishes in the next village, and there’s a nice, mildly technical, rocky track to end with. Here I was greeted by my old friend: The Stitch. As usual it appeared 75% of the way through the race and I felt as though my liver was exploding. Grimacing a little, I pushed on, keen to get down in under the hour. Happily, the finish line had also been brought uphill a little bit to avoid runners congregating in Daddry Shield and I stopped my watch at 52:47, with all my organs intact.

The finish felt a bit strange: there was no prizegiving, no church hall full of cakes, mud and sweat, we had no idea of our placings as half the runners were still to set off! But overall, it was a really fun morning out and the set-up and organisation were excellent. It was a testament to Durham Fell Runners for holding their nerve and showing that these events can be done in a way that minimises the risk of Covid transmission. I hope there will be more to come over the winter, but sadly I won’t be holding my breath. 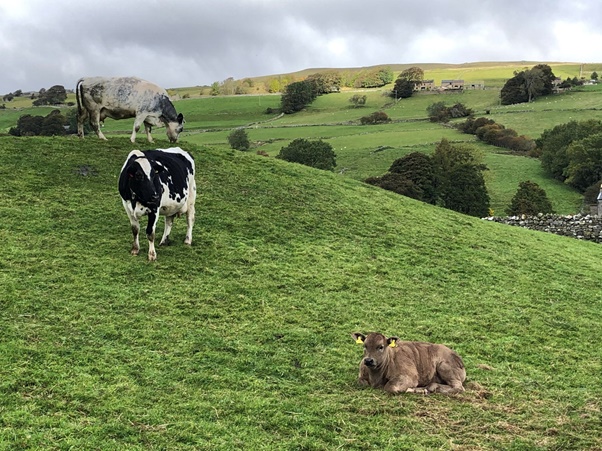 Permanent link to this article: https://www.tynebridgeharriers.com/2020/10/10/chapelfell-top-fell-race-race-report/