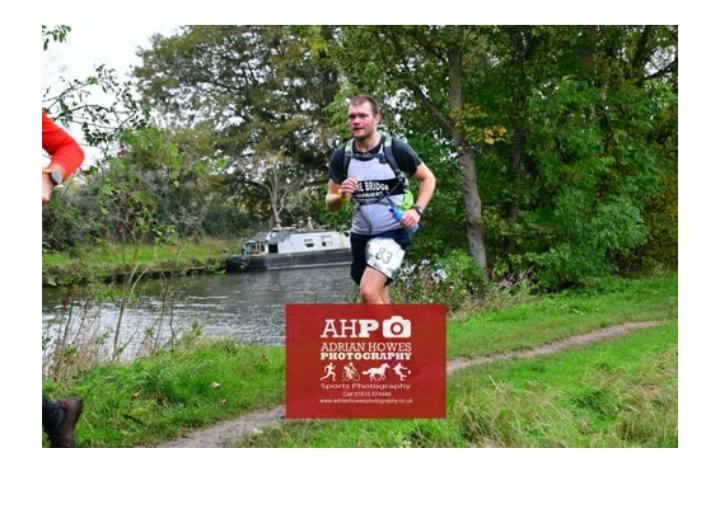 When the going gets tough.

The “Thames Trot” Ultra is described as “The UK’s Classic Tough 50 Mile Ultra” and seemed to fit the bill nicely for my first foray into Ultra running. I mainly train on the Quayside so I’m far more at home running on the flats and I’m not one for orienteering – the Thames Trot looked to be ideal! Researching the route, it looked to be nice and flat all the way. It follows the “Thames Path National Trail,” and has been previously described by other competitors as “one of the best way marked routes we’ve come across,” so no reason to worry about getting lost. It’s called a trot, so how hard can it be right?

I’ve been wanting to have a go at an Ultra for a while. Whenever I mentioned it to friends and family I’d get the, “Oh no, Neil’s losing the plot again!” look from them, but after hearing a few people from the club had tackled “The Wall,” during the summer I plucked up the courage and signed up.
After a restless night’s sleep, (I always find it tough to sleep before any race. A mixture of excitement, nerves, not wanting to sleep in etc) I took the short walk from my Air BnB to the race HQ at Hawkwell House Hotel in Oxford for 7.30 am. Got registered in good time (number, pins, tracker, dropped off clean clothes for the finish) then chilled out before I got going. By “chilled out,” I mean I checked and re-checked I had everything I needed in my bag multiple times and went to the toilet every 5 mins!
Just before the 8.30 am start, I got the final instructions. With the ominous words of, “the 1st few checkpoints are going to be a bit muddy but it does get easier ...” ringing in my ears, I strolled down to the main road to start. The whistle went off and I was on the move! I had a few idea’s of how I’d try and tackle the race, all of which went out the window after about 50 yards as I set off too quick (standard!). The race started on tarmac but moved quickly onto grass/mud as I approached the Thames and started making my way towards Henley. I tried to settle into a reasonable tempo and follow the “racing line,” of the runners ahead of me as the ground was pretty slippy. I ticked the first few miles off fairly comfortably, but I was probably (definitely) going a bit too quick. I was with a group of 3 others which meant I didn’t have to worry about getting lost and I wasn’t running the whole thing solo.
The first checkpoint arrived at around mile 10. I stopped to re-fill my water bottles (the marshals were great at every checkpoint – filling up your water for you, talking you through what food/gels/drinks they had etc) and managed to lose touch with the little group I’d been running with. I was still a little worried about getting lost as the route was a little difficult to navigate, so I upped my pace when leaving the checkpoint in a bid to gradually latch back on. (In hindsight, writing this back gives me nightmares … what was I thinking?!?!). I managed to work my way back and rejoin the group within a few miles. It seemed like a decent plan when our group went the correct way at a bridge crossing and I noticed a group ahead of us having to double back when they had realised that they’d missed the turning and had gone off course. The extra effort combined with the nature of the course (thick mud and slippy grass) meant I was already starting to feel it a bit more than I’d hoped. Looking back, a more conservative approach would have been far more sensible! I got through the half marathon point in just over 1 hour 50 mins.

The next checkpoint was around 19 miles in. I’d begun to slow slightly but things were still going fairly well as I struggled through the mud (The Thames “Path” might be a trade descriptions breach! ;-)) and was still in pretty good spirits. On long runs/marathons this is usually the point where I start to falter, so I made a point of taking a little longer at the aid station, taking on extra fluids and shovelling some jellies into my mouth to be washed down with some gels. When I first started using gels in marathons they made me feel horrendous! However, I’ve trained with them and learned to make the most of them. I’ve had no issues for ages so pre-race I’d had no concerns about getting fuel on board. This was slightly ironic when 2 miles later, I was hunched over being sick at the side of the course and slowing to a walk! I certainly hadn’t expected to be saying “I think I’ll be ok if i can be sick again,” to concerned fellow runners with 60% of the race left, nor that I’d be pleased when I managed a sub 8 min KM as that meant I was starting to get moving again! I checked in with friends and family. Don’t think they were quite expecting a text saying “20 miles in. Legs are toast. Been sick and cried a bit,” but at this point I wasn’t thinking clearly enough to sugar coat it for them.
In the lead up to the race I’d watched some documentaries on ultra running on YouTube. A common theme is that to break it down, you look to run from checkpoint to checkpoint. As things started to unravel a bit my aim was to focus on getting to the next checkpoint. Along the way I ticked off the half way point and marathon point. These milestones were mentally useful to tick off rather than physically. I got through the marathon point around 4 hrs 26 mins. Mile 28 was the next checkpoint. Due to not being able to keep much down, I had slowed a fair bit and was starting to worry about making the cut-off (11 hours). The lady at the checkpoint said I was 2 hours ahead of the deadline so I had a loads of time to play with. It’s amazing how your mind starts to play tricks on you in situations like this. I was clinging onto the hope that the course would stop being a mud-bath and become more like the trails/paths I was used to. However, it started raining and in turn, the course got more and more churned up and increasingly difficult to run through. 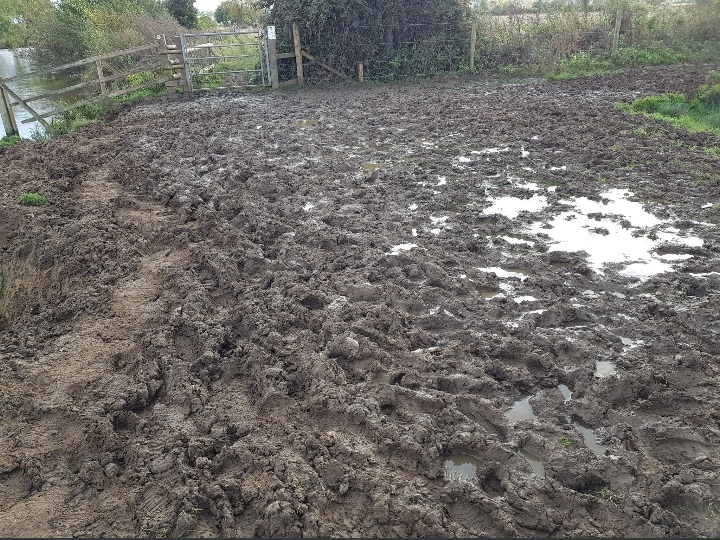 Did someone ask for mud?

Between checkpoint 3 and 4 (miles 28-35) are all still a bit of a blur to be honest. I kept running but there must have been an issue with my watch because the distance ran was barely moving up but the time seemed to be rapidly increasing! Strava said I was running 13/14 minute miles so I’ll have to take their word for it! By the time I got to the next check point I’d been running for 6 and 1/2 hours. At that pace I had around an hour leeway for the cut-off and felt a bit more human. I took some food on board (pork pie’s a particular treat at this stage), sent some more positive messages to friends/family and went off with renewed vigour! …That lasted about 5 mins! I climbed through a housing estate and down the other side to get back onto the path (by this point my legs wished it was mud and not a concrete descent). For the next few miles I mixed slow running with walking but the writing was on the wall when a runner caught me up and walked alongside me for a chat/breather whilst I was running at my max pace..! I had hoped to cling on and keep running at least up until the last checkpoint at around mile 42 but my walk breaks were the same pace as my running efforts at the time. With a half marathon to go and 4 hours until the cut off, I decided power walking was the most efficient way to get to the finish. After some mental arithmetic I worked out I’d still have a bit of leeway just in case I got lost.
This is definitely the part of my journey where I questioned my own sanity. Firstly, for signing up for this race. Secondly for having to power walk the last 10+ miles on dead legs through the mud to make the cut-off. It all seemed a bit barmy. The insanity level was ramped up when my watch died after 42 miles so I became blind to how much distance I had to cover/what time it was. I’d kept a solid walking pace so I knew (hoped?) I’d finish by now. With weather conditions getting worse, trying to get my phone out of my bag in the cold seemed too difficult a task after it took me ages to get my head torch out and ready for when darkness descended. As I moved closer to the finish, locals started to recognise that I was doing the race and shouted “3 miles to go from here,” and “only 2 miles left when you get to the bridge.” When I moved back onto the river front I heard the noise from the finish area – relief and a final rush of adrenaline kicked in! A passer-by said “well done, you’ve 10 minutes away,” and I was finally within sight of the finish. I managed to produce a sprint finish (broke into a stumbling jog) in the home straight and was pleasantly surprised to see that I’d sneaked through the finish in under 10 hours. To be honest, by the end I’d have been happy with 10:59:59!! I quickly grabbed my medal (which, coincidentally doubles as a bottle opener … handy!) and headed for the changing rooms to thaw out and demolish approximately 10 Chia Charge flapjacks. I looked around and everyone looked like a wreck. Lots of groaning as all the competitors made the smallest movements. The 200m walk to the train station seemed beyond me by this point but everyone was smiling. Conversations between competitors followed the same path – “how was it?”  “ah, brutal, you?” “oh yeah, found it really tough.” Yet they all managed it with a grin on their faces. Madness! 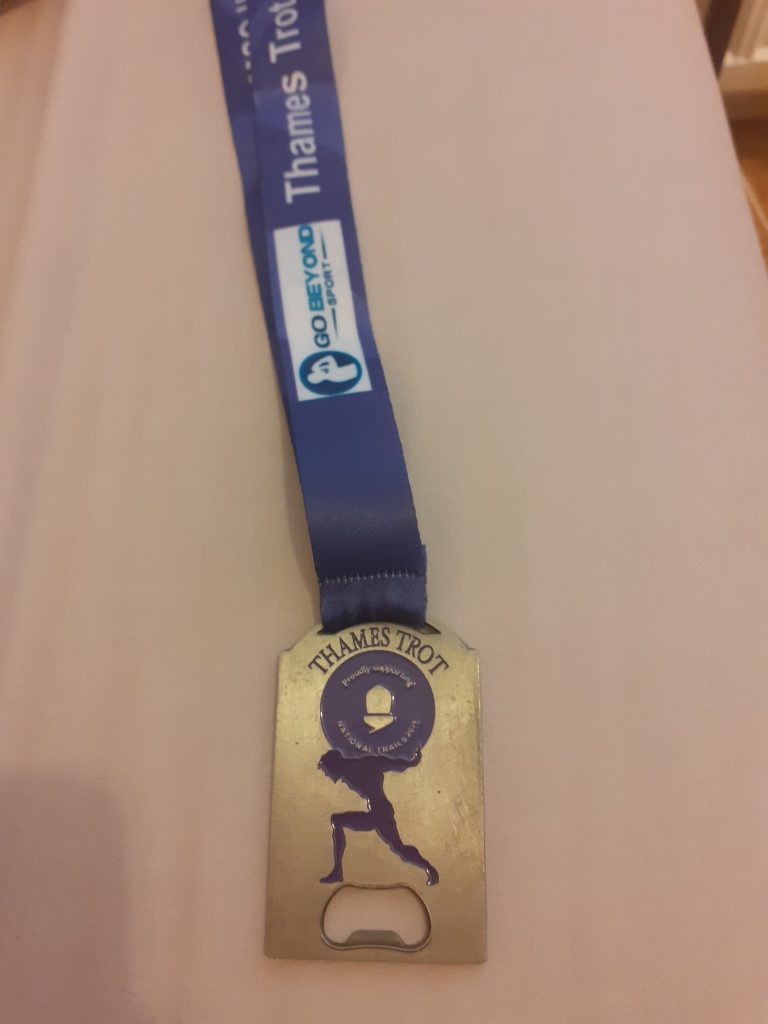 Fetch me a bottle

I certainly felt that I got the full ultra experience. Looking back I think I was totally under-prepared for all of it, but I guess the best way to find out about these things and how they work, is to give it a try and learn as you go along. Course wise it turned out to be relatively easy to follow, so that’s definitely a positive. Every gate having a different opening mechanism to the last one might seem a minor inconvenience, but as you get more tired, each gate was like trying to get out of the crystal maze! The event organisers moved the race from February to October this year in search of better ground and weather conditions and were unlucky this year. The route itself was nice and scenic along the river and certainly flat – I just massively under-estimated the carnage the mud would cause. At the very least It was good prep for X country

I said the immortal phrase “never again” after I finished (and repeatedly for the last 10 miles), yet yesterday on the journey home I was Googling other Ultra’s, trying to scope out what the next challenge will be once I’ve rested up! In the mean time I’m looking forward to getting back to the shorter, less muddy sprint distances … like road marathons

Permanent link to this article: https://www.tynebridgeharriers.com/2019/10/29/race-report-the-thames-trot/