Tyne Bridge Harriers > Member Of The Month > Member of the Month: September 2019 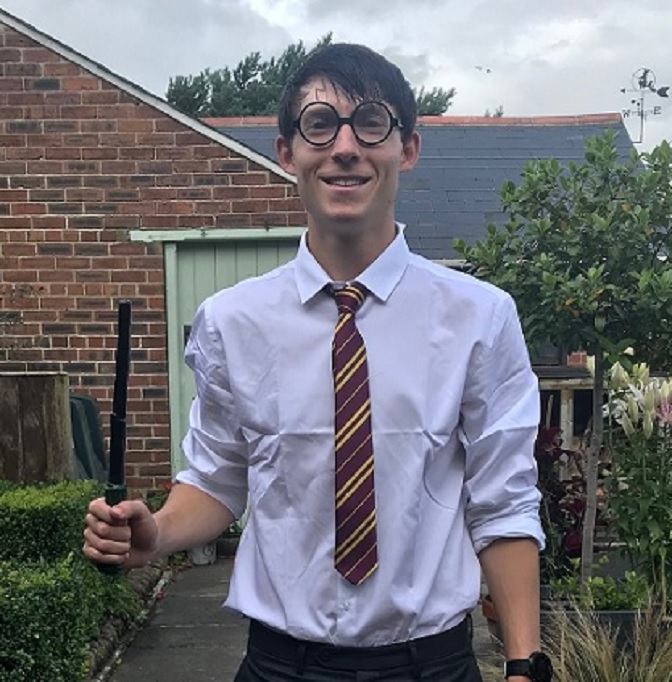 September’s Member of the Month hails from Little Whinging, Surrey and was a student at the Hogwarts School of Witchcraft and Wizardry.

Congratulations to Harry Potter… aka Alex Black. In September, Alex joined TBH Secretary Ian Pickett in entering the Guinness Book of Records for a running-related feat, becoming the fastest half-marathon finisher dressed as a book character. Alex was raising money for the charity Youth Focus North East and completed the Great North Run in an impressive 1:19:18.

Lee Pattison was nominated by a few members, who mentioned his excellent PB runs at the Great North Run and the Berlin Marathon, his hard work in training and how well he has integrated into TBH since joining the club.

Chris West was nominated for his support in pacing Lee at the Great North Run.

Adrian Hall was nominated for his support for the club at cross country, and his exceptional baking skills. If you want to sample his baking for yourself, get along to a cross country session (ask one of the club captains if you’re not registered.)

Neal Richardson was nominated for a strong run at Lambton Estate Trail Half Marathon, in what were, by all accounts, pretty awful conditions.

There were other great results in September which didn’t receive nominations – for details of these, including numerous PBs, Rob Wishart’s track marathon, Dave Moir’s club record and June Hindmarsh’s 1st FV70 at the Prudhoe Miners’ 5M, head over to the September results page.

Well done to all. A reminder that you can nominate someone for member of the month at any time during the month by emailing Adam. We encourage nominations from all groups. Nominations can be for race performances or for contributing to the club in some way. Committee members and the previous 12 months’ winners are not eligible.

Permanent link to this article: https://www.tynebridgeharriers.com/2019/10/31/member-of-the-month-september-2019/