Before I begin, a note of warning, I have tried to make this a waffle-free report but unfortunately some bits of waffle may have crept in unintentionally.

Going into 2019 full of optimism for the year ahead, I set myself the challenge of running a half marathon in under 80 minutes (yes, laugh all you want, but I still believe I can do it). And knowing it was as flat as the proverbial witch’s tit, I choose the Amsterdam Half Marathon as the race to attain my goal.

The race took on even more significance when my younger brother decided to enter too; not only looking to run his first half marathon, but his first ever race full stop.

As the months ticked by, my running yo-yoed from the highs of completing two marathons, to the lows of being injured for weeks on end (hmmm!, I’m wondering if there’s a link between the two), and I arrived on the start line of the Amsterdam HM somewhere in the middle ground; not entirely 100% fit, but feeling positive about the race nevertheless.

A spate of niggles over summer had put the kibosh on my sub 80 challenge but I was still going to give it my best and hopefully see out the year with a decent performance.

And if I could claim bragging rights in the Daniels’ household, even better.

So 1:20pm Sunday afternoon, and I’m standing in the ‘white’ starting pen designated for sub 1h 40m runners. Surrounded by people who clearly aren’t sub 1-40 runners.  It appears some things are the same whatever country you’re in. Conditions are perfect for running, with the temperature hovering around 15deg, grey skies overhead and not a breath of wind. I don’t know if it’s just wishful thinking, but I’ve a feeling I’m in for a good one today.

The hooter goes (hoot!) and we’re off. But not fast, and not far, as runners are funnelled towards the narrow start line and over some timing mats. After about five minutes I cross the timing mats and press the start button on my watch. Yeah! I’m away. But happiness quickly turns to panic as I hear that familiar ‘resetting’ beep coming from my Garmin.

“F@$%!!, not now”, I cry, as I frantically try to restart the thing. After what seems an age (but was probably around 30 seconds) the watch starts doing what it’s told and I’m away. Yeah!

The first 7-800 metres are spent zig-zagging past people who clearly aren’t going to finish under 1-40, and it isn’t long before I hear the first cry of ‘Go on Tyne Bridge’ and give a thumbs up in acknowledgement.

Having ran the Amsterdam Marathon in 2012, my abiding memories of that race were the stunning countryside views as we traced the River Amstel for several miles. Sadly, there are no countryside views today as the half keeps within the city centre and neighbouring suburbs, but the lack of scenery is compensated by terrific support from the locals, including one guy who serenades runners with ‘You’ll Never Walk Alone’ from his apartment window and several bands who have been going at it since 8:30 this morning (when the Marathon started).

Taking into account all the bobbing and weaving I’ve done, I feel quite pleased when the first mile passes by in 6:59. But rather than clock watch for the remainder of the race, I try to maintain a steady effort level and keep reminding myself ‘Form, form, form’.

Approaching the 8K marker I glimpse a pacer in the distance (the tall flag they’re carrying on their back is the give-away) and wonder what time they’re aiming for. At this stage I’ve honestly no idea what pace I’m running or what time I’m on for, but I feel super relaxed and my ‘form’ mantra is holding up well. Drawing level with the pacer (and their pursuing group) I see 1h 35m on the pacer flag and wonder whether to stay with them or push on and see what transpires.  After a few second’s deliberation I decide to run my own race and steadily pull away from the group.

Besides the local encouragement (I found a sign stating ‘Naked Ladies 100m ahead’ particularly amusing, if somewhat disappointingly a big fat lie), there is also fantastic support from marshals & volunteers, with an abundance of feed stations around the course.  But apprehensive about having a repeat of the stomach issues that affected my previous HM, I decline the fluids, gels and bananas on offer and see out the race untroubled.

With a few miles remaining, the route enters Vondelpark (arguably the most scenic section of the HM and by far the best supported) and I latch onto a group of four runners.  As well as setting a canny pace, the group also warn each other of any impending hazards, most notably walking marathon participants who seemly appear from nowhere and cause us to swerve around them. Although still feeling strong in body, the race is obviously having an effect on my mind because when I spot former member Carl Smith among the crowd I raise my hand and call out ‘Alright Craig’. Apologies Carl.

As we exit the park I glance at my watch and see 12.16m on the display. ‘Come on, just 1 mile to go’, I shout out, although I’m not exactly sure who I’m shouting too. Or whether anyone can actually understand me. The final mile takes us past numerous street bars and cafes, and the locals are having a whale of a time cheering us on from the comfort of their chairs. The closer we get to the finish, the greater the number of spectators increases on the side lines, and as we enter the Olympic Stadium for a grand finale the noise from the grandstands is overwhelming. With half a lap of the running track remaining, adrenalin surges through my body and I bring about one last effort to the finish line, raising my arms aloft as if I’ve won an Olympic title.

Sadly there’s no Olympic medal – only a half marathon medal like all the other finishers – but I am rewarded with a time under 1:29. My quickest half marathon this year and a massive confidence boost knowing there’s loads to come if when I’m 100% fit and healthy.

After a brief chat with a few members from Newcastle Front Runners (well done Russell on your HM PB) I quickly change and make my way back out onto the course, getting to see my brother finish his first half marathon in 2:17. He says it’s his last, but how many times have we heard that before. 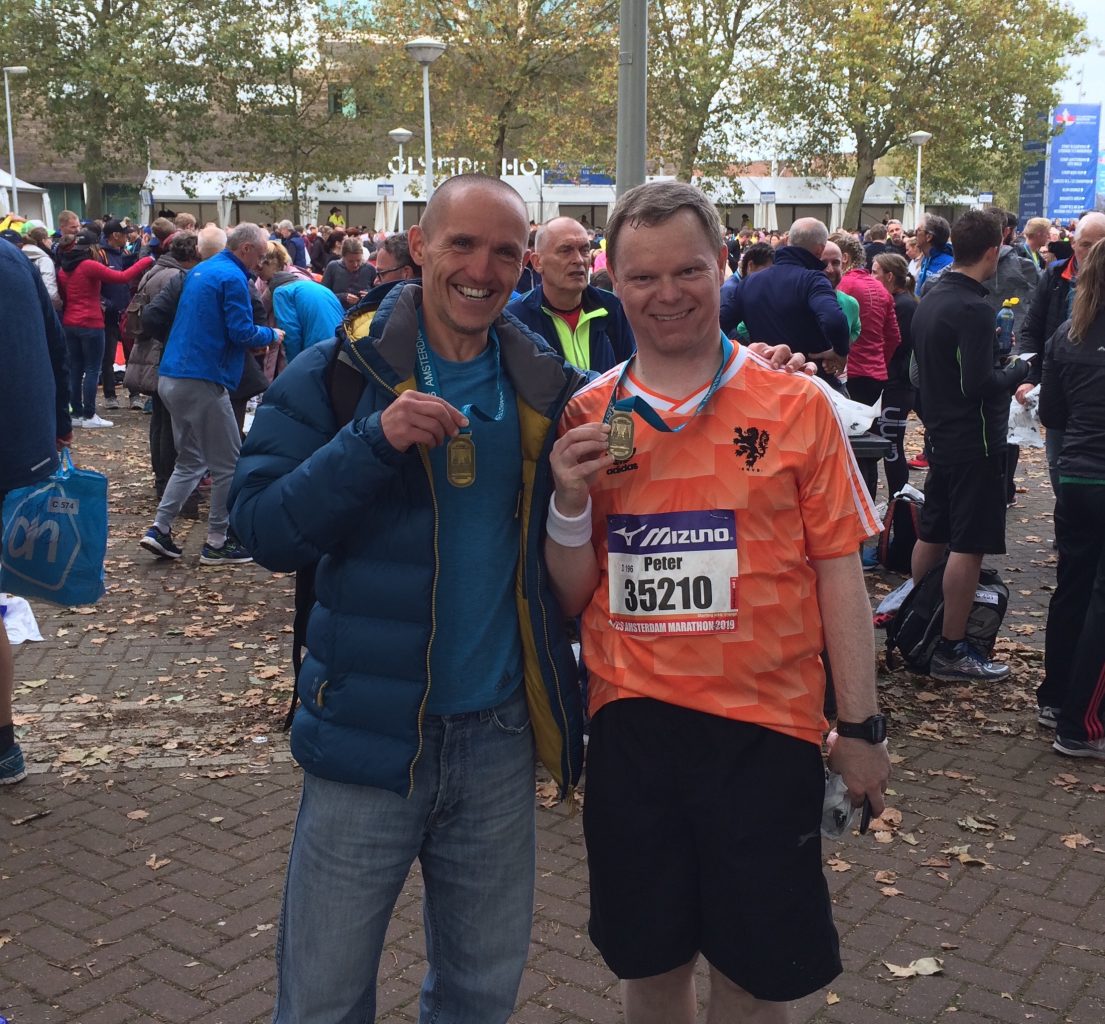 The first medal is always the most cherished

Overall, I’d definitely recommend this event to anyone looking for a race in foreign fields. Flights from Newcastle to Amsterdam are fairly cheap and take just over an hour, there’s accommodation to suit all budgets and the flat course lends itself to good times – if you don’t get held up at the beginning or distracted by the naked ladies.

Permanent link to this article: https://www.tynebridgeharriers.com/2019/10/24/race-report-amsterdam-half-marathon/