Check Points were at miles 10, 17, 20 & 28. The only essential equipment required was a foil blanket, waterproof top and a mobile phone. You could use ‘drop bags’ at 3 out of the 4 check points (Drop bags are mini parcels of snacks that you provide to the event organisers so they can deliver them to the check points for your arrival to save you carrying your food).

With my alarm set for 4:50am on Saturday morning, I ended up waking up extra early at 3:50am. Was I too scared to sleep in? (though, thinking about it, it wouldn’t have been a bad excuse to get out of running this race). The race started at 8am with registration from 6:30 until 7:45am. I arrived at the rugby club at 7:10am with friends from Stocksfield Striders and Peterlee running clubs. Felt unusual being a solo Tyne Bridge Harrier!

I headed straight to the registration desk, receiving my race number, safety pins, tracker and t-shirt. I was asked by the volunteers, if I was looking forward to it; My response: “I’m not sure looking forward to it would be the words I’d use right now!”, They laughed and I walked away to sort myself out:- Number on club vest, tracker on my wrist, toilet etc. Then, I met up again with friends and people they knew. Everyone giving me strange looks (I looked around and realised I was probably the youngest one there). As conversations were in full swing, everyone discussing their drops bags, strategies, training routines; It soon became apparent how much of a novice I was at ultra-running and how very little training I had done (more so than I already thought). Although the weather was sunny (with minimal breeze), what most runners would call ‘perfect weather conditions’. It was still a little chilly at this time of morning to be running at a steady pace, so I decided to leave my jacket on. 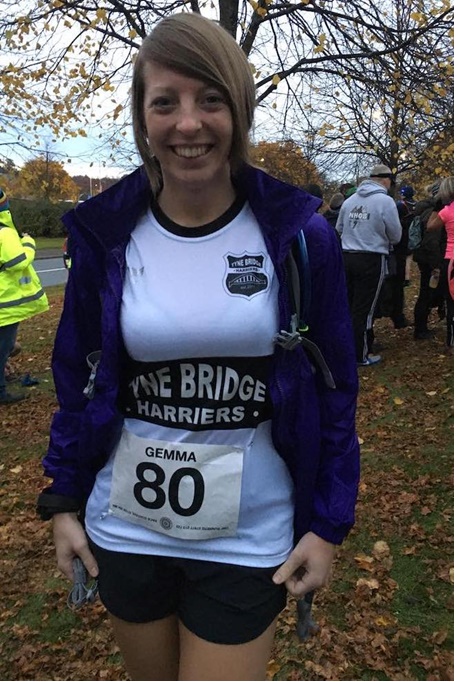 Ready, and raring to go

At 7:45am we were given a safety briefing from one of the volunteers and then shortly after, walked up to the start line (which was across the road), and started a mass warm up to the YMCA. What more could anyone want at 7:50am on a Saturday morning?!

At 8am the whistle was blown, and we all scuttled through the start line.

So, I set off at a steady pace along the roadside; a mile down the road, the route swings out to the riverside, then another mile down the road, we crossed a bridge (that swung from side to side), as more people stepped onto the bridge, the more the bridge swung! (not great for those who don’t like heights or swingy things!) A few fields and tracks, we were shortly on the route of St Cuthbert’s Way.

The route was proving to be quite spectacular with the sunny blue sky and colours of the leaves added to the beautiful scenery. We were lucky to have such a beautiful day. Due to the recent amounts of rain, the route wasn’t all that easy when we came up to a mudslide (First time I’ve ever lost a shoe!), with runners sliding behind me, I managed to get out of the way so I could attempt to put my shoe back on. 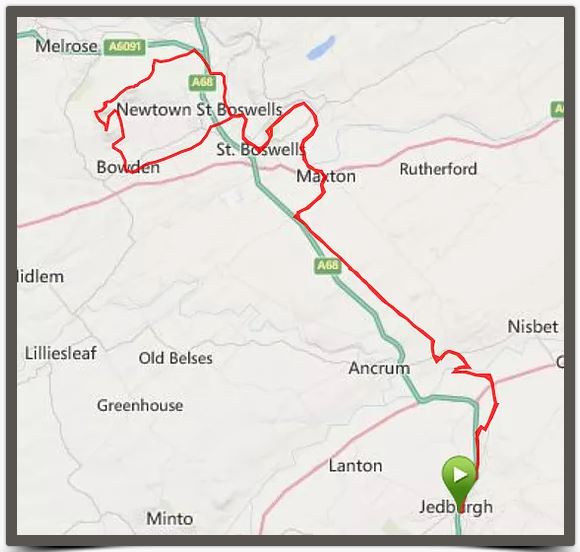 10 miles in, I arrived at the first check point, Maxton Church. A toilet stop, quick bite to eat (Some people had drop bags at this point, I however had a lunchbox size loaf of soreen and a mini packet of Haribo’s, that I had taken with me), a couple of drinks of water and coke (supplied by the event organisers) and jacket removed (due to the warmth), I was on my way again. As I left the check point, running down the hill I passed a man playing the bagpipes; this was an emotional moment as this reminded me of my late grandad, due to the Scottish heritage. Running over fields, along tracks, across roads, up and down steps and across bridges (all had been made a little slippery by the recent rainfall and leaves which had fallen off the trees).

17 miles in, I arrived at the second check point, Rhymer’s stone; Another toilet stop, a few snacks from my bag and a few drinks, I left to start my journey again, around the corner was a kit check (Of course this took a while, as items are never at the top of your bag when you need them), Kit checked by people in fancy dress, they were laughing at how clean I still looked (I didn’t feel it!)

Feeling great, I continued on, I thought to myself “two miles and I’ll be at the half way point.” Still plodding along, I’m thinking to myself “where are these three peaks everyone’s been telling me about?! A mile and a half later; I glanced up, to see a huge mountain in front of me (Eildon hills), “I found the peaks!” Muttering every swear word under my breath. One foot in front of the other, I started to climb the rocky path, stopping every now and again, even crawling at one point, until I eventually reached the top; Only to then realise I had to come all the way back down?! One foot in front of the other, clinging on to every branch of weed I could find, trying not to fall down the steep slope. (Bear in mind I’m over 1000ft in the air). Then I repeated this for the second peak, when a runner passed me on the downhill and I asked how he was going so fast. He shouted to me from across the way “It gets easier if you take your brakes off!” As I tried to relax and ‘take my brakes off’ my foot slid a little way down, so the brakes were then back on! (I thought I was going to have to be rescued by mountain rescue. I then had to repeat my first two performances a third time. (Though, this wasn’t quite as bad as the previous two). When I touched the bottom, I had to run back on myself and into the woods that lead to the third check point. Before I had arrived; running down the slight hill, I was greeted by marshals and then out came two people dressed as a bat and a squirrel, attempting to scare the runners (It worked!).

Down to the third check point at Bowden (20 miles), I was greeted by a few marshals and a play park! Up the climbing frame (this was difficult after having already climbed the three peaks prior to this) and down the slide; At this check point, there were drinks of water, coke and a few jelly sweets (Though, there were wasps flying around them, so I gave them a miss!)

From Bowden, the route retraces its steps back towards the finish line, still trying to keep moving forward though my legs were starting to hurt by this point, I was conscious of the time, as I’d been told the next check point had a cut off at 15:30pm. I then arrived back at Maxton (28 miles) at 15:10! Excited that I’d made it! I then bumped into a lady who I had been running with some of the route. So, a quick bite to eat, and a drink and we decided to run the rest of the way together.

28 miles down 10 to go, we struggled for the first couple of miles and then we started recognising more of the route we had previously ran. Back up the mud slide (This time I didn’t lose a shoe). A few more miles and we were crossing the bridge that swung, and then before we knew it, we were back on the home stretch. I could hear the marshals chanting at the finish line along with some music playing in the background, and a mile later I could see the bright rainbow arch. As I sped up to cross the finish line, the warm welcome from the marshals as I received my medal and goody bag was overwhelming. 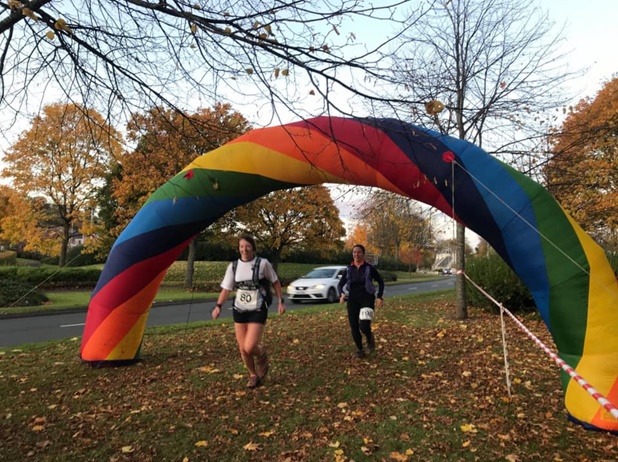 I strongly recommend this race to anyone who wants to give ultra-running a go, who’s not sure whether they can run the distance. This is a fun, very well organised and friendly event (fancy dress encouraged). The support from other runners, marshals, volunteers, mountain rescue, were all incredible!

Whose joining me next year?

Permanent link to this article: https://www.tynebridgeharriers.com/2019/10/27/race-report-jedburgh-three-peaks-ultra/