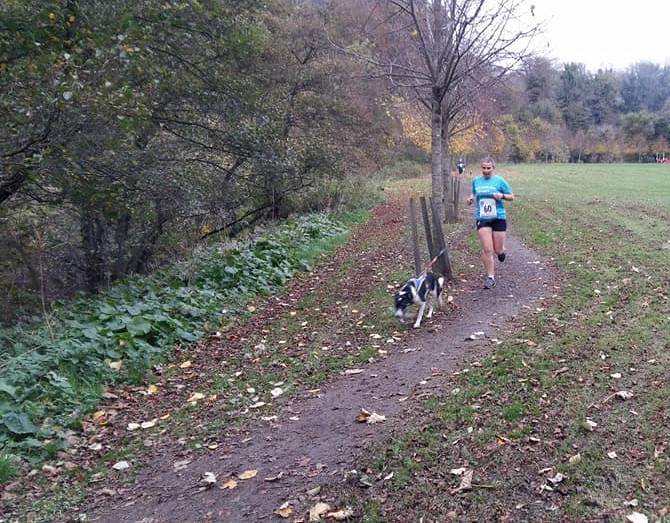 Vicki Deritis reports on a terrific weekend of running at Jedburgh.

We took the recently acquired campervan out for it’s maiden voyage north of the border to the Jedburgh Running Festival. The Scottish border town hosts an annual weekend of running events on the last weekend of October. On the Saturday, there is a 38 mile ultramarathon, an ultramarathon relay and a canicross event, followed by a 10k, half marathon and a wheelchair race on the Sunday. The festival events are, as far as we can ascertain put on by the local community, and it was, as ever, pleasing to be taking part in non profit driven events free of corporate razzmatazz.

On Saturday my pooch Finn and I took part in the canicross event. To the uninitiated canicross is basically cross country running with either one or two dogs. It is very popular in Scotland. The dogs are attached to their running partners by way of a bungee lead attached to a harness on the dog and a running belt on the human. Runners and their dogs are started at 15 second intervals to avoid the inevitable chaos and carnage which would ensue with a mass start (although from a spectator’s point of view it would be a great one to watch, film and get it onto YouTube). The fastest pairings go off first based upon what your 5k time is. This is to avoid too much overtaking and much slower runners getting in the way of the faster ones. This event was 4.66 miles long and involved 620′ of ascent. At the mandatory pre-race briefing it was explained that the good news was that there was just the one hill but the bad news was that it was the first half of the race. We were also advised that attacking or biting meant a DQ (we took it that that referred to dogs misbehaving but, perhaps, races can get a little rough in these Border towns). The dog poo protocol was also outlined. Please pick up after Fido if he needs a mid-race dump, you may give the bag to the next marshall but don’t throw it at the marshall.

Runners and dogs form a queue towards the start area. The runners look pretty much like…well… runners. The dogs are a much more varied bunch. Obviously, the border collies were well represented but they were joined by spaniels, pointers, dalmations, staffies, border terriers and dogs of uncertain parentage. There were big dogs, medium dogs and dogs which would comfortably fit into a modest sized handbag. As anyone who has taken part in a NE parkrun will probably know Finn gets extremely excited and very, very noisy before the start. Now, times that by 50 or 100 to get some idea of the febrile atmosphere around the start area. If you’re not a fan of dogs then this would be like something approaching hell.

Then we were off and running. Fortunately, Finn’s toilet needs had been met prior to the start so, unlike the dog belonging to the first (and very speedy) runner to set off there was no need to stop after 200 yards for a protracted leg cock. The route took in paths, woodland, minor roads, farm tracks and muddy fields to the south of Jedburgh. It was a great running route, dog or no dog. I started off at 60th and finished 50th so made progress in the right direction, completing the course in 48.16. The day’s fastest pairing was Douglas Kenmure and Hendricks finishing in 27.17. That’s comfortably under 6 minute miling by our maths.

Race over and it was time to enjoy a cup of tea, chat dog related stuff and check out the available kit. Then it was off for lunch at a local cafe and a walk up to a local viewpoint before Sunday’s races.

The extra hour’s sleep on account of the clocks going back was much appreciated as was the drop in the wind speed which had rattled around our overnight digs. The weather looked like it would provide ideal running conditions. Both the 10k and half marathon start together from the centre of Jedburgh and head NE towards Kelso before each race’s respective turning points are reached. The roads are closed with the exception of the last 2 miles when you run on the footpath of the A68 back into Jedburgh. The route is undulating with the first couple of miles of both routes being the most hilly although there is a further unwelcome hill at about 4 miles (10k) and 11 miles (HM).

Even though Jedburgh is only 56 miles from Newcastle and just over an hours drive, there is, generally, not a big representation from NE clubs (with the honourable exception of Newcastle Frontrunners who turned out in force complete with rainbow banner and an inflatable unicorn). Notwithstanding the fact that the race is an overwhelmingly Scottish affair, NE runners have been successful at the business end of recent races. Last year the first 4 places in the 10k went to runners from NE clubs. This year the 10k was won by NSP‘s Guy Bracken and Chris Smith of Morpeth Harriers was second in the HM.

We set off at 11am to the accompaniment of the Jedburgh Pipe Band. John looking to get under his HM marker of 1.30 and myself hoping to get under the hour for the 10k – with Finn relegated to the van. John ran a fairly steady race but slowed down in the second half so had to put in a bit of a shift in the last couple of miles to get under 90 minutes which he did with about 30 seconds to spare. I realised, early doors, that neither racing the previous day or chowing down a far too big breakfast was conducive to a tip- top performance and finished in 1.02.14. Russell Dickinson-Deane of Newcastle Frontrunners and TBH had a cracking run finishing 2nd MV50 with a PB of 1.26.47.

We would definitely recommend any of the running festival events, especially if you want to combine it with a weekend in a lovely part of the country. The events are well organised, friendly and good value. We’ll probably be back next year. Maybe see you there?

Permanent link to this article: https://www.tynebridgeharriers.com/2017/10/29/jedburgh-running-festival-october-2017/