No, I’ve never heard of a quarter marathon before either. But given that I knew I’d be spending Easter with family in Dorset I knew I had to get at least some running in and this race fit the bill quite nicely.

Although happy with my form in general I managed to sustain an injury in my last minute high intensity training (smacked my heel off a rock chasing the kids around the beach) so I was quite nervous about whether I should even compete given that my real focus was the Liverpool Marathon in 6 weeks’ time. However on race day whilst still sore it seemed to be in good enough shape to manage the 6.55 mile loop – if I had to pull out at least it wouldn’t be too far of a hobble back to the start!

A walk along the prom from Bournemouth to the start at Boscombe Pier stretched the legs out nicely in sunny but cool conditions that were looking good for a decent race. Arriving at registration it was clear that the field of 300 would be dominated by a handful of local clubs – particularly visible were Littledown Harriers whose website appropriately welcomes visitors to the ‘sea of orange’ and who had turned out in numbers rivalling TBH at a North East fixture. I may never trouble the runners at the sharp end but it still seemed like a bit of incentive to put in a decent shift for the club.

Numbers collected, clothes on the baggage truck, bit of warming up on the prom and we were ready for the off. Lottie had chosen to start at the back of the pack so I left her with some words of encouragement that hopefully didn’t betray my own fizzing pre-race nerves too much and got amongst the runners that looked like the most likely candidates for my own pace. Organisation had been good thus far, although the race director could have switched his megaphone on earlier so that we could hear more of the briefing than “….but that’s really the only major hazard.” Anyway, without further ado we were sent on our way in the traditional manner – a slightly terrifying giant rabbit shouting “3,2,1, Go!”

The first 2.5 miles were flat and straight along the promenade, although this was fairly narrow in places and starting to get busy with beach goers (plus we’d been warned about the threat of being mown down by the Peppa Pig road train) so I decided to get as quick a start as I dared to clear the bulk of the pack and get my sights on some faster opponents to chase. 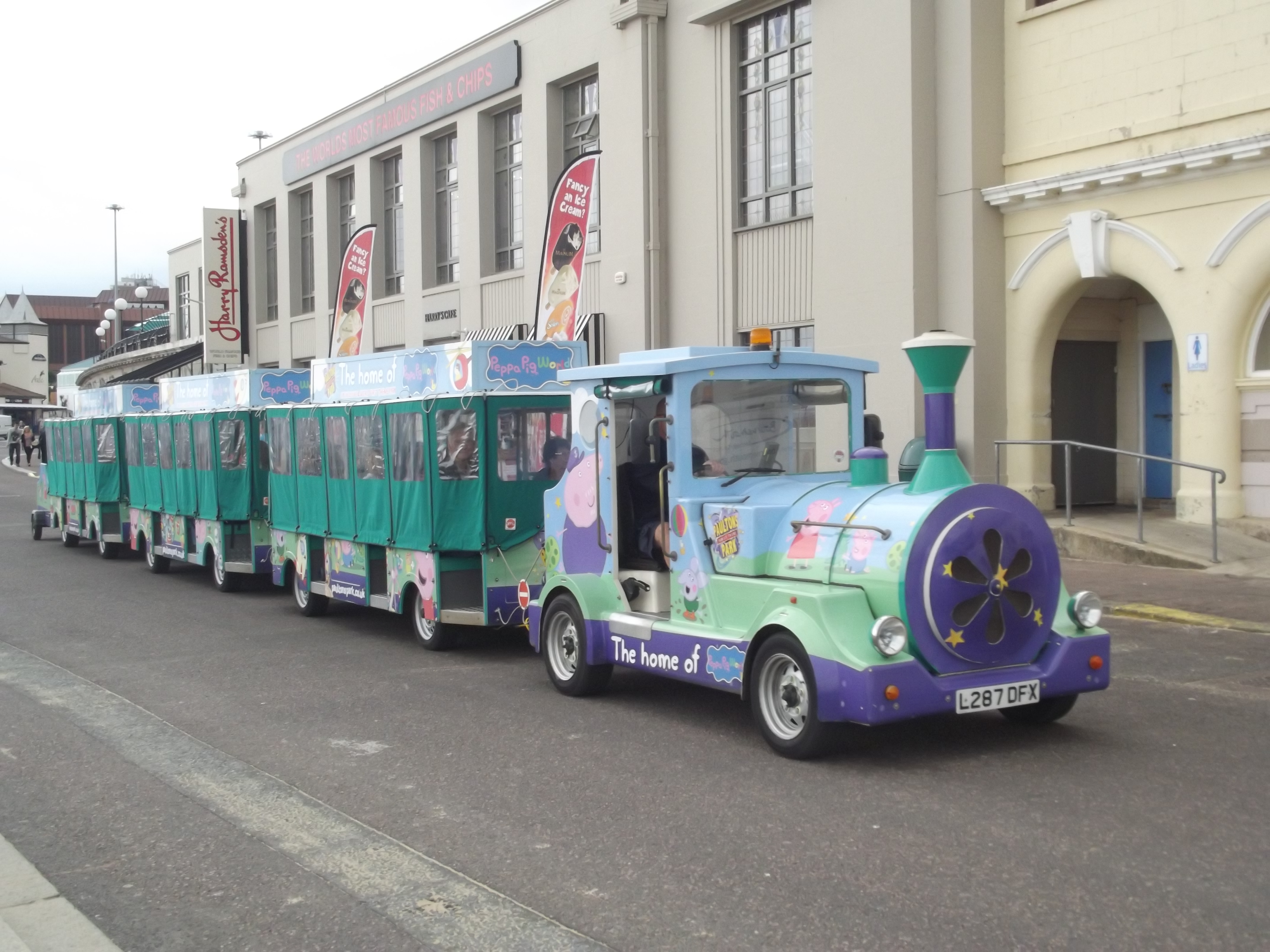 The first mile went by in 6:15. I was well aware I couldn’t sustain that pace but it had put me in a good position and given me plenty of space to run my own race so started to settle down to something like my 5k pace – much faster than I’d planned coming into the race but it felt comfortable and I wanted to make up some time before the hill that I knew would be coming. Before long a few of the overly keen fast starters were starting to drop back.

At the end of the prom the course loops around the streets up to the route back along the clifftop above. The hill was less brutal than expected and I kept up the pace. I went through 5k in around 19:40. To put that in context, I’ve never run sub 20 before. The race was going well.

Just after the halfway point it was onto the cliff top road back towards the pier – and into the wind. A constant, draining headwind killed everyone’s pace over the next couple of miles. Those Saturday mornings on the town moor had put me in good stead for this though and I managed to make up a bit of ground on the runners ahead. I was starting to feel the effects of the fast start and the pain in my heel was starting to make itself felt over the race adrenaline but I was now in a good race with a couple of the faster locals, and with the pier in view below the cliffs marking the finish line I started to claw back some of the pace I’d lost to the wind.

The final section of the race was downhill – not one of those easy downhills you can relax on, more like one that makes you pray your legs have still got it in them to make the turn at the bottom so you don’t end up in the sea. I like to think I’m fairly brave at chucking myself down slopes but around blind corners on strange roads that are open to traffic – well let’s just say I think the locals had the advantage of me here and the couple I’d been racing left me in their dust as they bombed down to the prom. Still, the marshals near the bottom did a grand job of keeping the route clear and as I took the sharp left onto the finish straight along the prom I was determined to hold off the runners still closing me down from the hill. I threw everything into the final sprint and crossed the line in 42:06.

After picking up a medal, a bottle of water and a Creme Egg (these should be mandatory for all goody bags) I took off back up the hill to watch Lottie coming in. The marshals holding traffic around the course had been great but it seemed like there were a few missing in places, and I took up a spot on the hill where as well as cheering in the runners I could give a bit of help with traffic warnings. Before long Lottie came into view and she ran over as if to give me a hug – Coach’s hat on – “Don’t stop! You’re nearly there! They’ve got Creme Eggs but you’ll have to be quick!” this seemed inspirational enough and I ran alongside her as she picked up the pace for the finish (that hill was a lot more painful the second time down!). With a goal time of 1:10, she crossed the line in a fantastic time of 1:06:45. 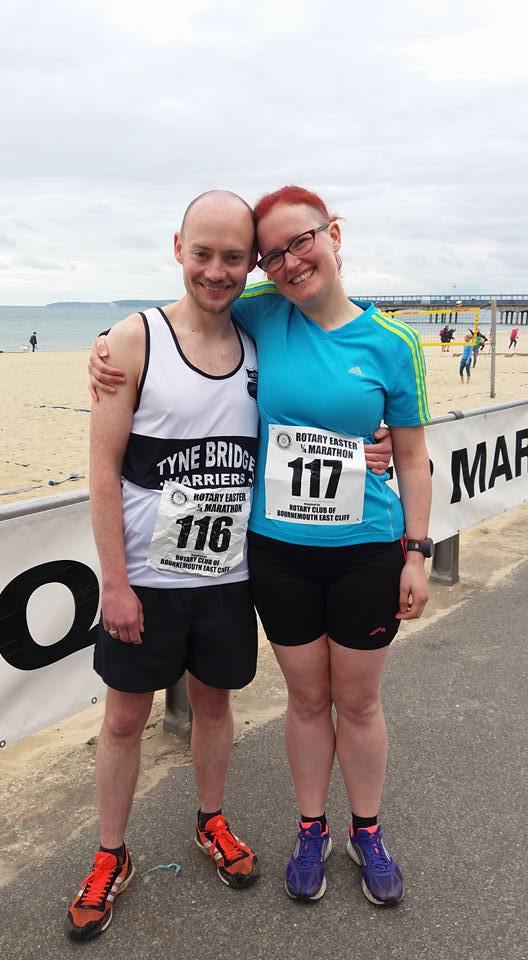 First across the line was Ian Trickett of Dorset Doddlers in 34:14, first lady was Juliet Champion of Poole AC in 40:33.

A really enjoyable race that I’d recommend to anyone that finds themselves on the South coast over Easter weekend, I was very happy to place 20th out of 297 finishers, and I think we made it through the day without Peppa Pig claiming any victims.

Permanent link to this article: https://www.tynebridgeharriers.com/2017/05/01/east-cliff-rotary-quarter-marathon-race-report/