Its been quite a year for the Ladies of TBH. I wish I could mention everyone individually. The Ladies of TBH go from strength to strength, from the small start of three on the first official club session nearly 6 years ago, we finish 2016 with 217 seniors (WOW!) and 26 aspiring girls in the junior section. In this year alone we’ve seen an almighty 63 new ladies joining the club, and 10 girls joining our Junior section.

We have achieved the Ladies team prizes at the Clive Cookson, Blaydon Races, Bamburgh 10k, Heaton Memorial and Saltwell 10k – all significant events on the regional road racing calendar.  At Blaydon, we had 80 ladies of 159 TBH runners. Can I just say also beating attendance of the guys….ahem.

Member of the Month was awarded to many of our well deserving ladies, for great achievements on track and field, new personal bests and recognition of their contribution to running. We saw new records set at the British Masters Track and Field. We also had a first for TBH when MotM was awarded as a team prize for the Under 13 Girls Team for the Northern Road Relay Championships.

Our Ladies travel far and wide to participate in all distances, from track and field, 5k to Ultra and everything in between. We have a growing army of fell runners and I know the off road terrain is really helping them to realise improvements in their road running performances. It goes without saying, we have a huge following for the NE Harrier League. For two years running now we have won the Ladies Trophy and 2016-2017 will be no different, …will it Ladies (yes that was a subtle hint). September saw ladies from Group 4/5 competing in St Oswalds Ultra, some trying that distance for the first time and I’m sure I remember the “OMG what am I doing” comments before, which then turned into “I’m doing another one” soon after. An inspiration to us all, to push our limits and see what the mind and body can achieve.

We all have different goals for where our running will take us; everyone gets something personal from their running, their own sense of achievement, new and lifelong friends but what brings us together is our common love for running.

May it long continue at TBH.

It’s been a remarkable and successful year for the men of TBH, across the disciplines and distances. Tyne Bridge vests have been spotted across road, cross-country, track and fell events all over the country and beyond. The reports of  achievements from members across all groups is testament to the hard work and commitment shown each week at training.

At the sharp end, Marc Fenwick has set new club records at 5k, 10mile, and half marathon distances, with James Dunce claiming the 10k best. There has also been a plethora of vet records across the age range. We’ve represented the club at the major national events, including the prestigious National 12 Stage (42nd place) and 6 Stage (62nd place) road relays at Sutton Park.

We’ve regained the Watson Trophy for the Heaton Memorial race, as well as taking team honours at Clive Cookson, during which Finn Brodie claimed the Club Championship.

Terry Scott has represented his country on both road and cross country, establishing himself as one of the top v45s in the process.

Our mud lovers also turned out in numbers to close teams at Northern and National championships. Despite very determined opposition we made a valiant attempt to retain our Harrier League title, coming a close 2nd, something we’re aiming to rectify in the new year

To finish the year with 3rd place in the North Eastern Cross Country Championships is a fantastic result and a true sign of the standing of the club in the local athletics scene.

We’ve also made ventures on the track, with participation in the track and field league, and an increasingly strong turnout from members of all groups at the masters events. With the same numbers we finished the season with, we can have a right go at winning that next year!


From the Men’s and Ladies’ captains, may we wish all of TBH and their families, a very Merry Christmas and a successful, happy, healthy year of running in 2017. 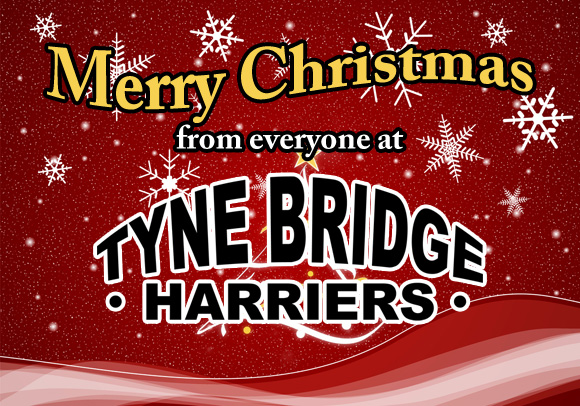 Permanent link to this article: https://www.tynebridgeharriers.com/2016/12/23/a-christmas-message/