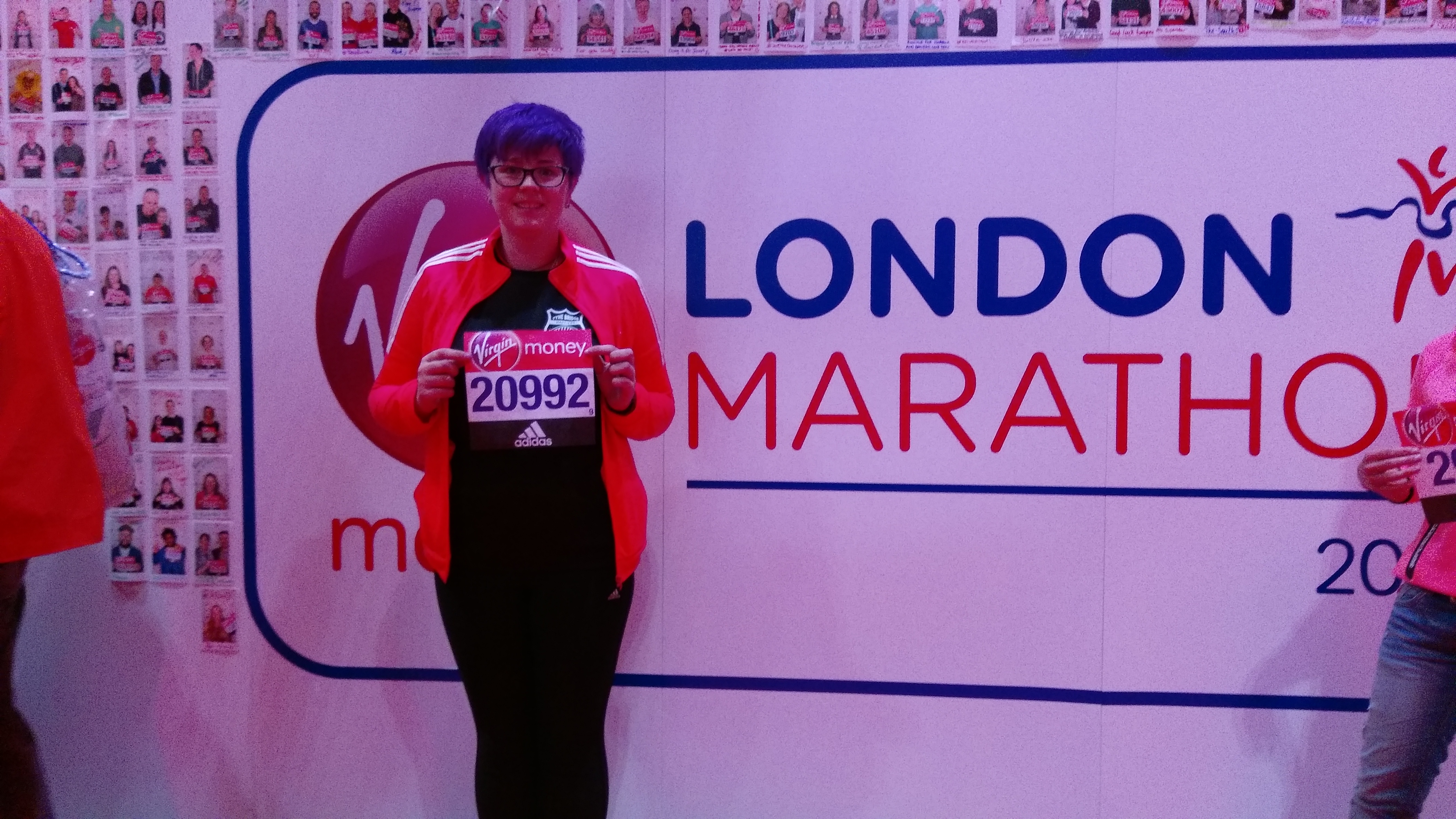 Having been short-changed in an earlier marathon attempt, Louise Kelly runs a full one around the streets of London.

Ah, London! The marathon that all runners aspire to do at some point in their running career. I was lucky enough, although some may say unlucky, to secure a place through the club ballot having been unsuccessful in the general ballot. I had a plan to try for a sub 5 marathon having achieved 5:42:24 at Manchester the previous year (more on that later). With this in mind I downloaded a plan to follow and was lucky enough to both secure a training partner this time round in the form of Michael Wisely and that at least one club session a week was near enough identical to my plan.

Speaking of training mine was temperamental at best. I would have two good weeks, then be unable to train properly for two whether it was through injury or illness but each time I was able to jump right back into it at the planned week. This time round everything felt different. When I trained for Manchester everything suffered. I got slower. Recovery took longer. I basically grew to hate running as I felt lonely on my solo long runs. With training this time I felt like a gazelle. Be it a extremely slow one. My 5k times came down hitting the sub 29 time which I didn’t think was possible a few weeks prior. I also managed to finally join the sub 60 10k club followed quickly by a massive half marathon PB the following week. With this all in mind I felt great. However it is when you feel at your best that things usually quickly take a sharp dive downwards.

It was a few days after the Northumberland Half that my hip issue that had been the bane of my existence for the majority of 2015 started to rear its ugly head again. I was to say the least heartbroken and had only managed to get out and run twice in the two weeks leading up to London. To add to this a few days before facebook was full of posts saying that Manchester had for three years been short. A quick check of my Power of Ten profile sure enough confirmed this and my marathon time had been taken off my PB’s. You would think that I would have been relieved by this as surely the pressure was off time wise but it had the opposite effect which probably wasn’t the most ideal frame of mind to have.

The weekend itself was manic. The Expo was out of this world. I basically didn’t want to leave the Adidas section, it was very much a runners paradise. In fact I’m going to save up for next year purchases now! 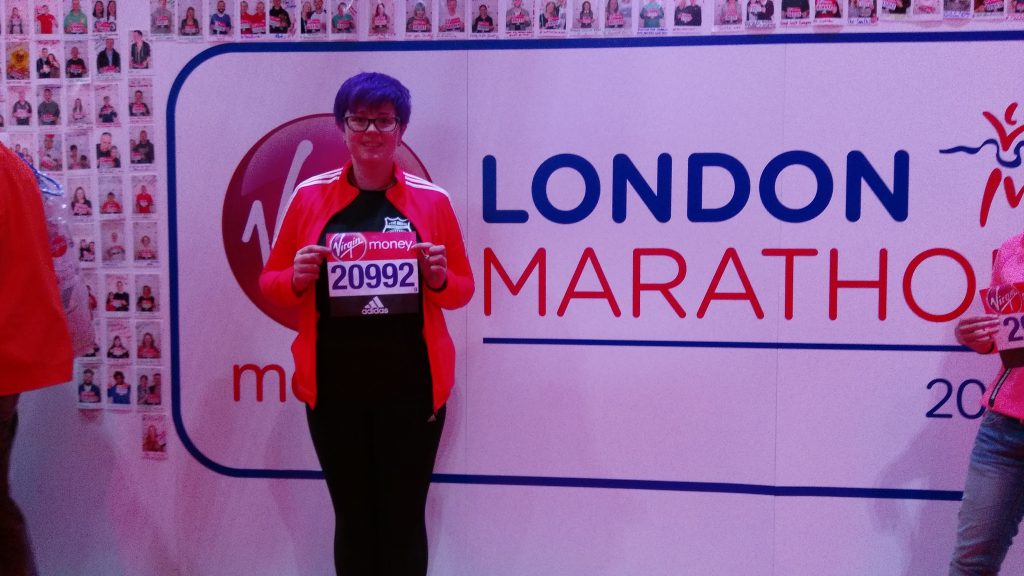 The morning of the race was stressful. I woke at 5am, an hour earlier then planned. Quick shower to wake myself up, got dressed and made my way to the overground station, only to be told that it didn’t start until 9:30am! I quickly ran back to the hotel where I was staying to enquire about buses only to be told that it would take only an hour due to diversions because of the race! In the end I ended up getting a taxi to the start. This to was stressful as the driver could barely speak English and insisted on ringing his office for the postcode even though I had the directions up on my phone. He then proceeded to spend five minutes looking on his Sat Nav at the differences travel wise between Blackheath, where I was starting from and Greenwich. In the end I ended up shouting at him to get going or I was going to miss the baggage buses. Safe to say I arrived with seconds to spare before the entrance was being shut, each would have meant walking the long way round. Bag was dumped and I bumped into Lindsay Walsh in the queue and started chatting with her and Michael. We then noticed a gang of familiar looking vests and proceeded to photobomb their picture, jumping up on to their backs, only for it to turn out to be runners from Penny Lane Striders! Thankfully they were good sports and allowed us to join in on a picture with them! 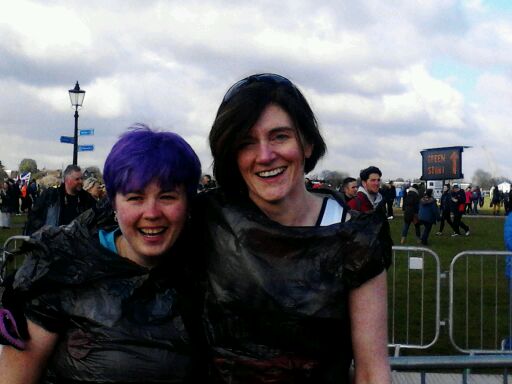 The race itself was amazing, the support was outstanding from the locals who stand outside for hours on end cheering runners around the course and to those who travel down to support family and friends including a lovely bunch of bumblebees. I even saw our very own Alex Battersby and had a quick much needed, moral boosting hug. Her enthusiasm on seeing me was electrifying! The award for best sign of the day was a draw between ‘Don’t fart. Whatever you do’ and ‘Keep Calm and Run away from Trump’s Toupee’. I did look for TBH runners while out and managed to shout out to Kenny Chambers, who proceeded to look around him puzzled, as he passed by on my left hand side just after I exited Tower Bridge between the 14/15 mile markers for me.

The race was going smoothly right up until just after 17 miles. I had stopped for the toilet not long after I passed the marker and had 3 hrs dead on the Garmin. I knew that the 13 mins deficit that myself and Michael had was gone from other pitstops that we had took but still I thought 9 miles in 1hr 45 mins that’s doable. Right? More like wrong. My legs left me totally, the left which I have never had issues with decided to start kicking up a fuss. I felt like crying but then I thought about my daughter who will never be able to experience something like this. I thought about my Nana who passed away just before Christmas, who would never get to see me complete this and then I thought about everyone at TBH. About how everyone will have or has had those moments of doubt while running. I also thought about those who had to drop out of London though injury, although it would turn out one of them decided last minute to run. Mega kudos and respect to Lee Cuthbertson on that note. That in my books takes either a lot of mental strength or stupidity, I’ll let others decide on which one it is.

Eventually the end was in sight as we turned into The Mall. They was no sprint finish, the legs just didn’t have it in them. Nor did I finish under 5 hours like I had wanted to. Still I managed to knock 40 mins off my time from the ‘Short’ Manchester Marathon from last year finishing in a not to shabby time of 5:02:55 and it is safe to say that I will be entering the ballot again for next year! All in all, every one of us from Tyne Bridge that made the trip down enjoyed the experience whether we had a bad run or a good one. Terry Scott with his amazing time for his first marathon and getting to his finish captured on TV as well! I bet a fair few of the group 1 boys were jumping up and down at home when they saw that! Bam Rashid who despite forgetting his vest had a cracking run knocking 8 mins off his previous best! I like to think that it was the power of Tony Carter’s vest, which TC kindly let him borrow, having absorbed all that speed from last year’s marathon!

Permanent link to this article: https://www.tynebridgeharriers.com/2016/04/26/2016-london-marathon-race-report/