A Day in the Clouds by Matt Walker

The pre-race nerves started early for this one; my first visit to Kielder but more importantly my first multi-sport event. I am paranoid enough about forgetting something for a normal race but add in the extra kit for the bike stage (not least the bike in full working order) and it’s a recipe for the gitters!

Setting off from Newcastle, after a quick pit stop for some last minute supplies (“where have I put the b****y Vaseline!?”), the fog seemed to be getting thicker with every mile. By Risdale the visibility was less than 100m and the procession of cars I was in had slowed to cautious pace. I eventually pulled into the car park behind the Anglers Arms in Kielder village which was quickly filling with people reassembling their bikes of all shapes and sizes.

The nerves started to peak as I picked at my cold pasta and re-fitted the front wheel to my bike. In a matter of minutes I was carefully parking my bike in the transition area and placing all my kit for the bike section in the box next to it. After walking back twice to check it was all there I was on the coach to the start at Leaplish.

The atmosphere in the start area was one of foggy anticipation. TBH’s own Simon Pryde was on the microphone geeing up the crowd and runners whilst making sure everyone knew what they were doing. There were also plenty of familiar faces around who were there for the 10km!

After some discussion at the start around the forecast clearing of the fog not coming off the race was underway! The start area for the RBR and the 10k was shared with the RBR race starting slightly earlier. We were quickly diverted onto a parallel path back in the direction we came from. Running past the waiting 10k runners there were supporting shouts from the waiting runners (Sounded like Sara James but I couldn’t be sure!)

The first part of the course was also the final part (somebody near me was very happy to see the “400m to go” sign so soon!) and the atmosphere as we crossed the finish line for the first time was fantastic. We were quickly out of the caravan park and the course became quiet. The track was a winding, undulating gravel ribbon following the reservoir edge and was to stay that way for the entire race. As we rounded an inlet I caught a brief sight of Jon Moss looking strong and clear at the front.

I spent much of the opening 11km run stage trying to enjoy the scenery a little in an attempt to keep my pace down. The fog was clinging stubbornly to trees that surround the water making the view dramatic but limited.

Slowly and carefully I picked my way through the field, enjoying the down hills and gaining on a few people on the short climbs while trying not to go too hard. The water side route gave way to tracks through the trees and back again a few times during the run. Suddenly it seemed we broke out of the trees and transition 1 was upon us.

I quickly located my bike, now to change the shoes and get my helmet on! But where are they!?! Panic! My box was no longer next to my bike! After a few frantic moments looking at the other nearby boxes a small team of the marshals were also on the hunt. After moments of despair, (“I cant ride without my helmet, even if I can get hold of a spare there is no way I can pedal my SPD’s with running shoes on is there?”), I saw my box coming towards me from outside the transition area in the direction of the transfer van. It must have been mistakenly removed instead of another box.

After a change that Clark Kent would have been proud of I was running out of transition with my bike and chomping at the bit to get going. My frustration resulted in going off hard on the bike to claw back the time I had been robbed. I soon started to catch and pass the people who had been around me as I finished the first run and continued to push on. Three and half miles into the 15.5mile ride I started to calm and realised that the frustrated pace I was doing couldn’t last and thankfully settled into a good rhythm. The undulating course threw up some sharp climbs and some twisting steep descents.

The views through the trees were rewarding and the handful of unlucky riders repairing punctures at the side of the course had me hoping desperately not to join them. The fragrant pine trees gave way once more and I found tarmac under my rubber. Now it was time for the exposed ride across the dam. After the protection of the trees the light wind crossing the dam felt like a gale but it was over mercifully quickly and it was back into the shelter on the other side of the reservoir. The undulation continued and despite my constant mental maths trying to work out how close transition 2 was it still took me by surprise when I heard the instruction to dismount just round the corner.

Mercifully T2 went much smoother and my jelly legs were soon carrying me back onto the trail. It might have been the fatigue but the start of the final run felt like it was all up with a thick carpet of pine straw underfoot. I was overtaken in the early stages by a fellow individual competitor and we both agreed that the legs didn’t want to get going again. I kept him in sight ahead of me as best as I could on the twisting path and passed a few people as the run went on, some running as part of a team effort and some individual entrants.

Ahead I could see the boats moored off the shore of the Leaplish waterside park and the finish area. But surely those mile markers must be wrong! They tell me that I am in the final 2 kilometres but those boats must be miles away! The boats ground closer and eventually I saw the 800m to go sign. The final kick was on and the sounds of the finish area get louder. As I round the final bend I pass runner who overtook me at the start of the leg and I make a final drive for the line spurred on by the crowd.

My finishing chip time 2:30:43 and with that ended one of the most enjoyable races I can remember. In the finish area I learnt that Lee Cuthbertson had won the 10k for TBH and Jon Moss had put in a great effort to win the individual run bike run by over a minute in a time of 2:03:31! Bam Rashid, returning from a serious injury and riding a heavy, rented mountain bike showed great determination to finish in 2:47 after stopping during the final leg to stretch a painful shoulder. Sandy Anderson also finished strongly in adversity having left T2 still wearing his cycle helmet and so ran most of the final 6k carrying it under his arm! 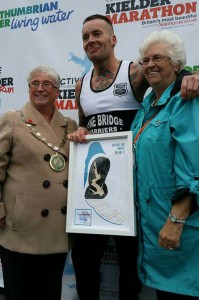 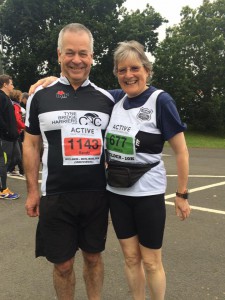 All in all, another great day out for Tyne Bridge Harriers at the beautiful Kielder reservoir. A great race despite the mistake during my transition, and I am sure not my last multisport event!

Thanks to all the supporters and a thanks to the marshals and organisers!

Permanent link to this article: https://www.tynebridgeharriers.com/2015/10/05/kielder-run-bike-run-2015-race-report/