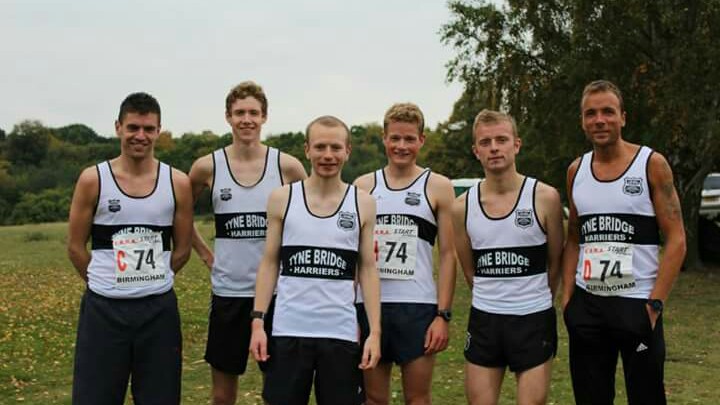 With a couple of local race victories and a number of members posting massive PB’s, it’s been quite a weekend for Tyne Bridge Harriers. But personally, one performance stands out above everything else.

Ever since I joined the club, I had heard about the quality of the field at the National 6-Stage Road Relay Championships held each year in Sutton Park. Tales of 5k PBs being beaten as the pack surged relentlessly out of reach, of Terry Scott (one of the best vets in the country) finishing 4th from last on the first leg while running inside 5:20 per mile. After a great team performance in the recent Northern 6-Stage in Blackpool, including strong runs from Alasdair Blain, Paul Turnbull and David Anderson, TBH had qualified for the Nationals for the 3rd year in succession. It was time to see for myself just how fast the Nationals really is.

It was a somewhat inauspicious start to the day, with the appointed hour of departure coming and going with no sign of the inimitable James Dunce. Fortunately, he was stirred from his peaceful slumber by a slightly frantic phone call, and a fast trip down the Coast Road later appeared sleepy-eyed at Byker Pool. The trip down to Birmingham was uneventful until our full complement of runners (minus northern exile Tony Carter) was unable to find the correct entrance to Sutton Park without first completing a full lap of the perimeter.

Anyway, we arrived with slightly less than 20 minutes to spare. Tony, who travelled up by train, had kindly collected our numbers in the several hours he had spent waiting for the TBH minibus to appear. So with a hastily completed warm up, James Dunce made his way to the line. The start was furiously fast, as predicted. James put in a very creditable performance, finishing the first leg of the 5.848km course in 49th place with a time of 18:51.

I was the next runner to go. The relatively short legs of the 6-Stage mean that the field was still bunched fairly closely together and made for a stressful start as the jostling mass of second-leg runners tried to climb over each other to reach the front of the changeover pen while simultaneously attempting to peer down the finishing straight and listen for the team number read out by the announcer. As James sprinted towards the line I fought my way out of the pen and just about made a timely start.

For those who have never run at Sutton Park, the route is very much one of two halves. First, the course shoots quickly downhill from the start before almost immediately veering straight back up and continues to climb for most of the first two miles. I made up several positions on this tough uphill section, before the order settled down as it tends to in long relay events and the race becomes more about trying to pick off the runner in front of you. The second half of the course is essentially a headlong downhill sprint until the last 600m. Saving a bit of energy for the downhill is vital as it’s possible to make up a lot of ground on those who have burnt their matches rather too freely on the earlier, harder terrain. The uphill kick to the line hurts even those runners for whom sub-5 minute miling is standard-fare (trust me, I saw their faces). I was just pipped to the line by fellow north-easterner Chris Smith of Morpeth Harriers, but I managed to move us up into 39th position with 18:29.

Club stalwart Marc Fenwick, never a fan of long minibus journeys, then helped us remain in contention for a top-40 finishing position with a run of 18:58. This was followed up by Terry Scott, who had been on a plane back from Florida a day previously, in 19:39 with TBH in 36th place. The Man of the Match perhaps has to go to Tony Carter who took back another 4 places and ran a superb 19:19. Yet another solid performance from Alex Polding (19:50), saw us come home in 33rd position (out of 68), the club’s highest finish to date. Alex also overtook Morpeth Harriers on the last leg, with TBH having been in hot pursuit most of the race, meaning we were second North East team behind Gateshead Harriers. Thanks must also go to Louise Kelly for the support and baked goods.

Overall, the National 6-Stage is a great event and a chance to represent the club and region on a national level. As TBH grows in strength and depth, competition for places will only increase. Bring on the 12-Stage in April next year!

Permanent link to this article: https://www.tynebridgeharriers.com/2015/10/04/national-6-stage-relays-2015-race-report/