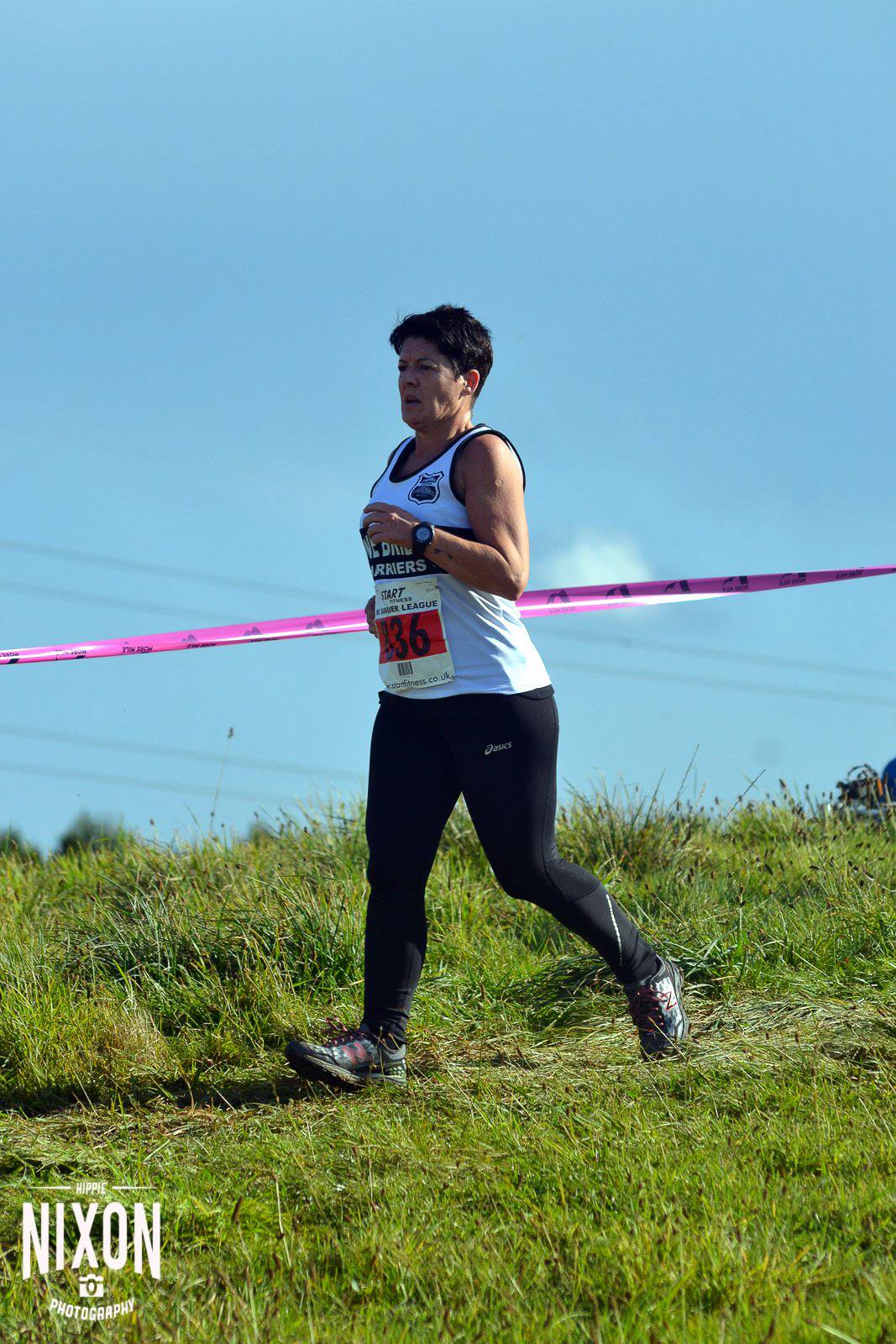 Having started a ‘Couch to 5k’ running programme a little over 2 years ago, the prime purpose being to lose weight, I have now completed a few 5k races (my least favourite distance), 2 x 5 mile, 1 x Blaydon Race, 3  x 10k, 2 x 10k Trail, 1 x Pier to Pier, 1 x 10 mile and three half-marathons. Not many compared to most of you, but plenty enough for me when entering races and events was never on the agenda. I won’t ever be fast, but I will always endeavour to improve.

Last year I had no idea what to expect from Kielder, I knew my lungs didn’t enjoy hills but I also knew I wanted to stretch myself beyond road races. I have an affinity with the great outdoors, forests, fresh air and open water, so this had to be a fantastic and fulfilling location.

I remember last year’s run as if it were yesterday, not because I ran well, not because I enjoyed it but for the way it hurt. I was lucky enough to have a fab running buddy with me that day, the ever encouraging Jayne Russell; who through pure frustration resorted to ‘shouting’ at me in the last kilometre in 2014. Jayne had dealt with my total desire to drop out at 6k, tears at 7k and stopping at 8k. It was my worst run ever for negative thoughts and self-talk, I can honestly say that I really didn’t enjoy…..well anything really!

This year I needed to do it again, not least to try and enjoy the experience and all that Kielder had to offer, but to beat the ‘lung demons’ on the hills. I entered as soon as entries were available (as part of my one race per month plan for 2015), however this year I was going it alone. My closest running buddies had other plans like training for longer events, succumbed to injuries or missed the boat as entries sold out.

To my great delight Faye and Mark Slade were the first friendly faces I spotted, followed by Sarah and Vicki and not least Sandy and Jessica Anderson. It was really reassuring walking to the start, that I wasn’t going to be alone in the wilderness. We were all so encouraging of one another, kind words and gentle reminders not to race off too fast, not least because that allusive 1.2 kilometre hill was looming not long from the start. It was pretty cold, Steve Cram reminded us of this as he passed us in his warm jacket and wooly bobble hat. Last minute nerves set in and I suddenly needed the toilet, we were in the start area and there was nowhere to go. I put it down to nerves and the cold temperature, hoping that the urge would subside once we started running.

The time had come, we were off, the TBH girls starting together steadily. I remember Faye’s encouraging words as we came to the base of the first dreaded long incline, “Go ahead Sarah, you’re looking strong”. I took that hill on, remembering to keep my head up, breathing rhythmically, pumping my arms and remembering that it’s just a hill that can’t kill me, unlike the bears that might be lurking behind the trees!

I remember reaching the top of that hill, feeling like I’d conquered Everest, I even smiled and thought to myself ‘it’s only mole hills from now on!’, something Jayne reminded me of in a message earlier that morning. I completely relaxed into the decline, taking in the scenery, until I was reminded that I still needed a comfort break (running downhill only increases that urge). I reminded myself that it was only a 10k so I would be fine. I remember several people overtaking me on the next incline, I reminded myself of the wise words of Ann Grenfell, “No one is better than yourself!” I dispelled all thoughts of people running faster and began to feel positive about the remainder of the run. I took in the peace and tranquillity of the forest, took some deep breaths and focused on the undulating path beneath me, even enjoying the feeling of the bark chippings underfoot; thinking this is so much more appealing than the hard tarmac of the roads.

As I approached the first water station, that sudden urge of needing the toilet returned; seeing the discarded bottles with water sloshing about inside just increased the sensation and necessity. There was a steady flow of runners, so at this point absolutely no chance of slipping behind a tree unnoticed. Never before have I noticed so many sensations during a run; the soft feeling of the trail, the smell of fresh pine trees, the stillness of the air, other individuals struggling to catch their breath on the inclines, oh and again, the not so pleasant feeling of needing to empty my bladder. At the brow of yet another ‘molehill’ I clocked a second water station, and a never to be forgotten toilet sign. Elation soon turned to the dreaded realisation that it was a porta loo; not sure what I was expecting in the middle of nowhere? Maybe a little stone cottage with a delightful downstairs toilet, fresh flowers on the windowsill and the luxury of Andrex quilted and liquid soap!? Some bears sitting at a kitchen table eating porridge…..Maybe not!

As other ‘little people’ know porta loos are not compatible with the length of our legs, the option to hover doesn’t exist. Luckily for me a man entering the green ‘tardis’, where he seemed content to stay, gave me the excuse to be totally uncouth and find an alternative place to impersonate ‘Paula Radcliffe’ (somewhat more discreetly, and with the irrational thought of sending an adder into cardiac arrest).

I felt human again, I upped my pace from slow to slightly less slow, starting to make progress and pass a few familiar brightly coloured leggings; you only notice these things when you are desperate to take your mind off something else. At one point I found myself playing ‘spot the most undesirable lycra!’ I regained my position, reaching the dreaded point whereby my mind told me ‘I couldn’t do it’, I remembered Jayne’s reaction to my negativity from the previous year’s race, even smiling and chuckling at the thought of Jayne shouting at me! I had no other desire other to complete the run and enjoy it.

I totally embraced the situation, legs felt fine, I wasn’t breathing like a twenty-a-day smoker and I knew the finish wasn’t too far way. Just ahead I could see the incline and corner where Jayne had endured my cries of “look over there, another f*****g hill, I can’t do this anymore!” I chuckled to myself and thought ‘wowzer I’m actually enjoying this!”.

I then caught sight of the 9k sign, I remembered that the last kilometre seemed to go on forever, I resigned myself to not take off like a gazelle (not that I ever could!), allowing others to increase their speed and pass me. I always like to leave a little in the tank in order that I don’t look like I’m dying in the home straight. At the 400m marker I was able to pass those who’d hit the home run too soon (a little smug voice inside my head saying ‘I knew that would happen!’)

I then heard Simon Pryde’s voice welcoming runners in and decided that I had it in me to run strongly (in my own flat footed style) towards the finish line. I heard cheers and my name being shouted with 20m to go, that really spurred me on, not until later did I realise it was Emma and Ade Brooks. I really appreciated it as I wasn’t expecting anyone to be there at the end. Shortly after crossing the line I heard Simon announce over the PA system that we had finished under 56 minutes, I was totally delighted as I knew I had smashed last year’s time. On turning around I saw Faye cross the line, followed by Vicki and then Jessica. Lots of friendly congratulations followed as we all realised that we’d superseded our expectations, Faye with a great PB and Jessica achieving her goal of finishing within the hour. Sarah had done really well and had already finished, for whatever irrational reason the corny line from Grease the movie ‘The Gang are all back together’ sprung to mind! We started together and the elation of all coming together at the end was depicted on all our faces.

Such a different experience from last year, a different mindset, strength in my legs, and ultimately I had put the demons of the previous year to bed. Following a relaxing sit down for the legs to seize; drinks, cake, chocolate and laughs in abundance, it was time to put some warm layers on and head outside. Jessica and I witnessed Jon Moss finish first in the Run-Bike-Run event, followed by Matt, Bam and Sandy who were all outstanding.  This has to be my favourite race of the year so far, great atmosphere, challenging course, really appealing medals and finisher’s t-shirts; I urge anyone who hasn’t experienced this course to enter one if the events at Kielder in 2016.