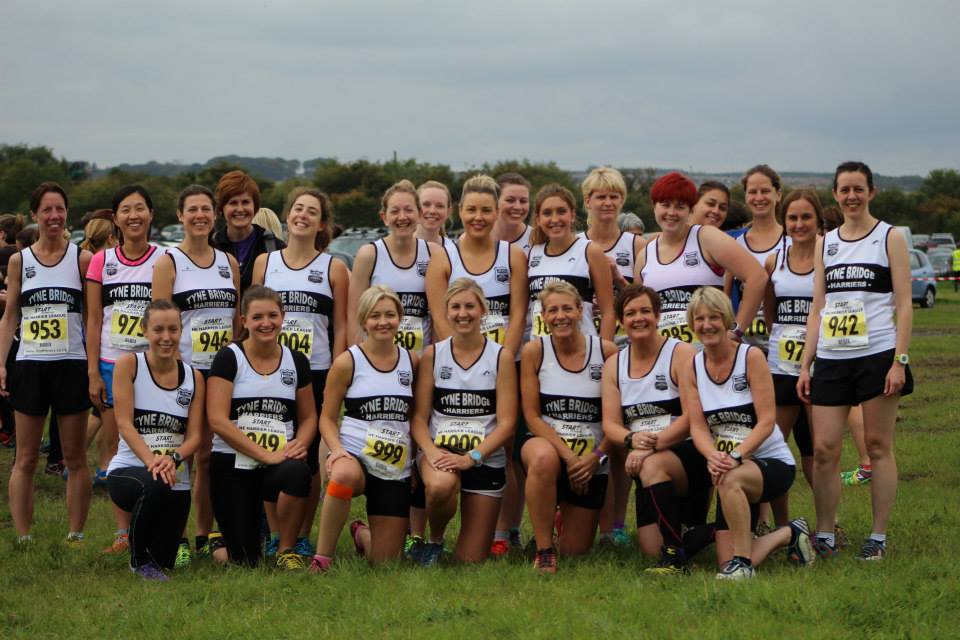 Louise Kelly reports from the first cross-country fixture of the season.

The location – a field located next to a disused (?) railway, in between Beamish and the Angel of the North.

The reason – the start of the NEHL XC season of course and defence of both the men’s and women’s Division 1 titles!

Ah! Cross-country! The reason I run in all honesty. Give me mud! Give me hills! I love it for the atmosphere and the fact that you get the chance to mix with fellow club members who you really only see in passing at training sessions or other races. Today for me was really all about just getting around the course without any niggles. I had made my return to training on the Tuesday beforehand and felt good with just a slight muscle strain that disappeared over night. With this information, I made the decision to run today and aimed to keep at HM pace going round the course. Anyway let’s get cracking on with the day itself.

After meeting up with Sara Tomassini, Adrian Hall, Phil Scott and Matt Walker we made the drive to Tanfield hitting the XC traffic as soon as we turned off the A1! It seems like it was going to be a busy one today! Once parked we made our way to the tents, snacks were deposited on the table – well I like to keep the troops fed, camera was handed to Christopher ‘Hui’ Huitson with the warning ‘You break it, I break you’ and number was collected. I decided to do the professional thing and warm up on the very nicely provided warm up loop at the top of the course. Legs felt good and I went back to the tent to grab a quick sip of water before heading to the start line. While in the tent I bumped into Leodhais, who had just finished his race and to which the following conversation ensued.

Leodhais – “Well the up hills are very boggy”

Me – “Would I manage in my fell runners or should I change to spikes?”

*digs out my spikes*

Me – “I haven’t cleaned these since Alnwick”

Quick change of shoes and I was at the start. Group photo was taken, after I missed the first one and we started to line up. I passed on the words of wisdom from Leodhais about the muddy hills and told the girls ‘Come on, up front we have every right to be there as the rest plus we are defending champions, let’s make them work to get past us’, clearly channelling my inner Sinead Coffey there!

Eventually we were off and soon hit the first hill which just seemed to go on and on! Up and down, up and down, the route twisting to the right, then the left. Soon some lovely muddy puddles appeared and the runners in front decided to stop and walk, picking their way through them. Which I found to be really annoying, I mean it’s only water for goodness sake! Little did they know what was ahead! Ha! Not long after I could hear shouting and screaming which might that we were near to the start of the course again! Down the hill we went and straight into the water jump! Ahhh! That was refreshing!  A shout out from Hui, who was on camera duty and onwards I went. Back into the woods, more ups and downs, twists and turns! More mud! Some hay bales with some Crook AC junior athletes sitting on them shouting out not only to their own runners but to other County Durham runners as well, the reason being because they are all representing County Durham. That was one proud young person there and I couldn’t fault their logic. Eventually, I headed out back into the open which meant the first lap was nearly over! I could also hear shouts from the club tent area – ‘Keep going Louise!’ – it’s always a welcome pick me up when that happens. 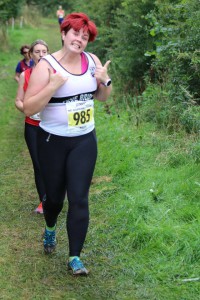 Thumbs up for XC

Start of lap two and my watch went, quick glance down and I had done my second mile within HM pace so I was pleased. Lap two was the same as lap one with a bit of walking on some of the uphill stretches, pins and needles started in my feet during mile three, damn I tided my shoes too tight! It’s okay I thought, the water feature will cool the legs and force the blood down to warm them up, that should sort the numbness out as well, shouldn’t it? Turns out it did. Yiphee! Back into the woods for one final time and things did not feel good. Slight niggle in the top of my leg same place as Tuesday, hmmmm, what to do? Quick glance ahead, no one was running on a warm up lap, so started walking along with my fingers pressed into the top of my leg. Ouch! That hurts! Quick self-massage, yes I know, that sounds wrong and it did look slightly wrong as well, to loosen it off a bit and back running I went. At one point I was passed by one of the under 19 boys, que a flashback to Nationals at Parliament Hill for a few seconds.

Finally the course came back into the open and I could hear the cheers being given to those that were finishing. Not long now! Turned on to the finishing straight and picked up the pace. No-one to catch up to but I didn’t want to risk being pipped at the line by another runner. Stopped the watch as I crossed the line and looked at my average pace time it was spot on for half marathon pacing. 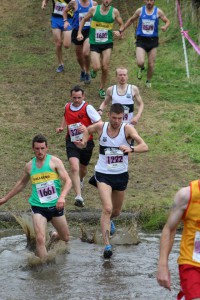 Yes, he really is that good!

Quick walk back to the tent to retrieve my camera, stick on a t-shirt, then off to the water feature for photo opportunities/action shots for the men. Well someone had to do it!

Until next year Tanfield (?)

Race results can be found on www.harrierleague.com

Permanent link to this article: https://www.tynebridgeharriers.com/2015/09/26/nehl-race-1-tanfield-lea-race-report/