Although many of us dream of winning a race, sometimes the greatest victory is achieved from completing a race.

Sara James takes us through her Coastal Run ordeal.

I love the sound of rain, but when I’m indoors and not planning to run 14 miles in it….  Waking up early on Sunday morning to the sound of rain lashing it down outside my open window, my thoughts were – why am I doing this race??  To do a run in a beautiful location along the Northumberland Coast, that’s why.  Just put aside the fact the furthest you’ve ran recently is 6 miles

We got to Alnmouth and Morag had a little warm up to run back to the car to recover her pins.  We caught the last bus and soon saw lots of TBH on the bus and at Beadnell – both running and those who had come up early to support.  The race started a little late and off we all went along the beach.  The headwind was strong, your feet instantly got wet and it was tough going running on ridged sand.  Margi and Morag were just in front of us and Kelly was by my side.

At 1.5 miles we came up off the beach onto road and had to walk as it was narrow.  It was here I made the fateful comment to Kelly that we just needed to complete the race in one piece, we weren’t racing it.  However, at 1.8 miles Kelly’s calf decided it had had enough

We did our stint of “you go on” “no, I’m not leaving you” “you go on” “I’ll find a marshal” etc.  Not knowing where the next marshal would be I ran back towards the beach where I remembered seeing one.  I had to explain to the runners I was passing I was ok.  The marshal said he would look after Kelly and drive her to the finish

Then I thought – balls, what am I going to do?!  I’m not used to running a long run on my own and I think I’m last!  Time to crack on and catch (who I thought!) were the tail runners.

I saw my friend Rachel cheering at mile 2.5.  I said I’d see her at the end, then shouted that I wouldn’t as her other half is super-fast.  Well done Bren on your 9th place!

By mile 3 I was tired.  My legs felt heavy and I had no energy. Aaaargh!  Energy drain doesn’t usually happen until a lot further on.  I forced a shot block piece down and tried to continue.  Then at Low Newton lots of runners joined from the left hand side.  They’d stuck to the beach at mile 1.5.  No idea which is the best route.

Onto the beach again, i.e. the energy sapping sand.  I thought of my friend Lois’ comment when she did the race two years ago – “I wasn’t enjoying the race but had to finish as I knew it would be a fab t-shirt.”  She was gutted as that was the polo shirt year.  Luckily I remembered that it was a very nice technical t-shirt last year so I kept my hopes high

Then I saw George and his wide angle lens.  I did think “blimey – George has quickened up, he’s ahead of me and still has time to stop and take photos!”

At 4ish miles Dunstanburgh Castle came into sight and you had to make your way up off the beach again.  I was joined by “the shaggy big black dog”.  The trail was very narrow and the dog kept brushing past me, then stopped dead in front of me, body checking me and finally decided to pee twice in front of me, blocking my path.  I love dogs but this one was taking the proverbial.  The marshals ahead told me I should run quicker to get past it :-o I considered leap frogging it but with that it ran past me back onto the beach.

The trails around the castle were littered with small jagged rocks – I almost went down twice within half a mile and I realised my legs were really tired again.  My shrieks were answered by fellow runners checking I was ok (yes).  Took another 2 pieces of Shot Blok and started to feel sick.  Then the black dog was back!  In work there is a big national focus on mental health awareness at the moment and I know that “the big black dog” is often referred to in mental health.  For some reason I thought of this (my mind sometimes wanders in races).  I likened this “real” dog as my determination to get through this.  I continued and at mile 6 the dog’s owner ran alongside and put the dog on a lead and went off the course.  Hah – got the better of you.  Bye!!

I came through Craster and there was a downhill (I love downhills) and a call of encouragement came from Annette Kelly.  For some reason I shouted back “Well Done Netty!”.  Proof that I was tired as she wasn’t actually running…  Then, where there’s a downhill there’s always an uphill…  This was when I realised that my feet were now hurting.  Badly.  They were blistering.  Just like the Brass Monkey.  Just like on our 20 mile training run.  Darn it!  It hurt to run, walking was easier.  I carried on, overtaking runners and then the same runners overtaking me when I had to walk.  Time to share a few words and some support.  The sun kept coming in and out and I needed lots of water.

At mile 8 I saw some marshals and a first aid vehicle.  I decided to get some plasters to sort out the blistering feet.  We discussed the fact this wouldn’t work so I asked for wadding and just asked them to tape the feet up but not to cut off my circulation…  I’d come this far and I wasn’t going to let the feet get the better of me.  I also spied a secret stash of water.  After negotiating the release of some water and shoving the sandy, soaking socks and trainers back on it was time to continue.  With that Clare Savory and her friend Chris came into sight.  It was lovely to see another TBH!

We kept each other company and ran/walked the next few miles and I tried the tact of – “let’s run to this mile” or “let’s run to that van” (fartlek anyone??).  I tried to negotiate an extra 50 metres at one point and Clare wasn’t having any of it

I laughed and we then chatted to Helen from Elvet Striders and Jo.  Then we finally saw the “about 2 miles to go sign” and were both overjoyed.  Off the road and onto the beach (and sand) for hopefully the last time.

I had however been warned that the last stretch on the beach was hard – the finish is further than you think and you have to come across from the wet, harder sand onto the softer sand.  Picture Bambi on Ice.  We tried to get our energy for that but there was a nasty headwind again at this point.  Clare then shouted – let’s run to the 2nd wooden line.  We got there and it felt like a gale in our faces.  Then we could see the finish line in the distance.  We bided our time and started running again.  Then I heard the cheers and saw Kelly

– it felt like half of TBH was there and was willing us on (thanks guys!).

Rusty Maholam joined us for the last 200m and said “it’s only 10 seconds to the finish line.”  This cracked me up – based on his legs, not mine!  With that Clare grabbed my hand and we continued onto the finishing line.  We hugged.  We’d done it!! 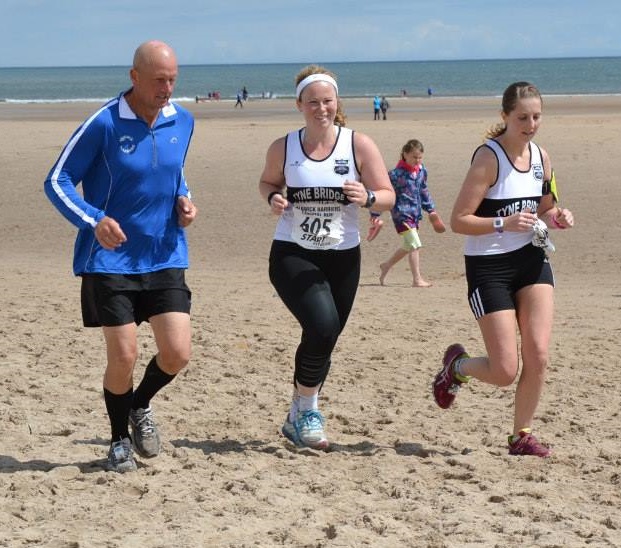 I have never felt so happy to finish a race.  It destroyed me (and my feet!) but it was over

I also got yet another face tan.  Who needs to go on holiday?!  Just do some outdoor running!

Right, I wanted my t-shirt…  I did have a minor strop at the t-shirt area where the lack of Size S was apparent.  Despite there being an S on my race number.  An annoyance as the slower runners don’t always get the top they ordered months ago on entry (same always happens at the Brass Monkey).  It’s odd that happens when you pre-order and then invariably there are no shows as well.  Still, it’s a lovely size M top!  I then found our superb cheerleading squad and I shed a tear.  Seriously, that race was emotional.

Overall, a lovely, scenic, well marshalled route but some challenging sections for the non road runner.  Time on my watch showed actual running time of 2h28m.  I was pretty happy with that but happier just to see the finish line.  I felt strong before this race but it’s made me realise I need to do some trail running, hills and beach training.  My colleague Ben has been trying to get me to do lunchtime hill sessions on the Town Moor for a while, so I may have to comply…

Permanent link to this article: https://www.tynebridgeharriers.com/2015/07/20/northumberland-coastal-run-2015-race-report-2/