Tyne Bridge Harriers are pleased to announce that we will once again be staging the Exhibition Park Cup 5K on Sunday 16th August 2015.

Unfortunately the 2014 race had to be cancelled due to the major works that were being carried out in the park as part of the Heritage Lottery Funded refurbishment project. We are hoping that the 2015 event will be bigger and better than ever taking full advantage of the newly resurfaced roads and paths in the park.

We have a new event headline sponsor in OnBoard Pro which has helped us keep entry fees for this chip timed race down to a minimum. OnBoard Pro provides innovative pre-tenancy software to Letting Agents in the UK. Other sponsors are Secret Training who are official supplier to UCI World Tour Team Tinkoff-Saxo & Start Fitness who are one of the leading suppliers of sports & fitness products & will be supplying prizes for this event. Tyne Bridge Harriers also acknowledge grateful assistance from Active Newcastle & Newcastle City Council without whose help, this race could not go ahead.

The Exhibition Park 5k Road Race has been staged on a course that takes in the Exhibition Park and the Town Moor since 2005, in that time some of the top names in local and national running have taken the honours. For the first four years the title was taken by Ryan McLeod running in the colours of Elswick Harriers. In 2008 Ryan ran a time of 14.34 to set a course record that still stands today. In fact in the eight years that the race has been ran the winner has only failed to break 15 minutes on one occasion. 2008 also saw the largest race entry with a total of 268 runners taking part in the race. In the 2006 race 40 runners broke the 18 minute barrier another demonstration of the potential for fast time on the course. Other race winners include Nick Swinburn and Yarod Hagos who announced himself to North East athletics in 2011 with a storming win in a time of 14.49.

In the Vets category the course record is held by a North East running stalwart in Ian Hudspith with time of 15.14 set in 2013. The women’s record was set by Hester Dix running in the colours of Blaydon Harriers set a course best of 16.58 in 2011.

Weather permitting the course offers genuine potential for PB’s. Although ran in the same vicinity as the Newcastle parkrun the course differs significantly in that runners start in the Exhibition Park and complete a lap of the lake before exiting onto the Town Moor through the gates behind the Museum. The course then heads north along the service road on the Town Moor parallel with the Great North road. Exiting from the moor the route heads up Grandstand Road before re-entering the Town Moor for a long straight run back towards the Exhibition Park, the second half of this section is downhill. The course then takes runners back into the Exhibition Park at the 4k mark with a final lap 1k of the park. Runners finish with a lap of the park including the bandstand and lake before crossing the finishing line. 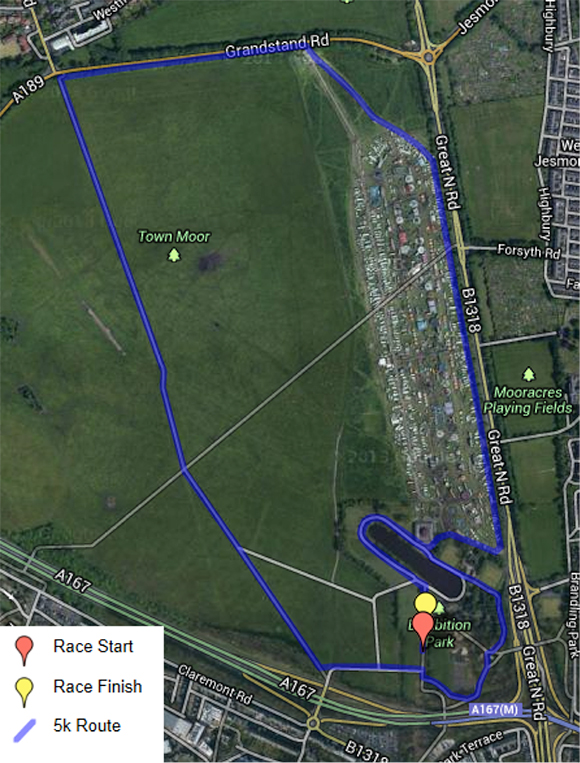 In addition to the 5k race the Tyne Bridge Harriers Juniors section are pleased to announce that they will also hosting a Young Athletes 1 Mile race for runners between 6yrs and U13. This will also be a chip timed race and incorporate a one mile lap of the park and a small section of the Town Moor Paths. Runners under the age of 8 must be accompanied by an adult.

Race fees for 5K (Senior & Veteran): UKA Club Runners £6.00 Unattached Runners £8.00. There will be an additional £1.00 to pay for entries on the day. Online entries will include a processing fee of 75p

1. Participants must follow instructions as given from all event officials including race staff, volunteers, medical personnel, security officers and city officials throughout the duration of the event.

2. All participants are expected to conduct themselves in a professional and courteous manner during their participation in the event.

4. The use of iPod’s / earphones / headphones should NOT be used by any competitors during the race.

Permanent link to this article: https://www.tynebridgeharriers.com/2015/05/14/race-announcement-onboardpro-exhibition-park-cup-5k-2015/