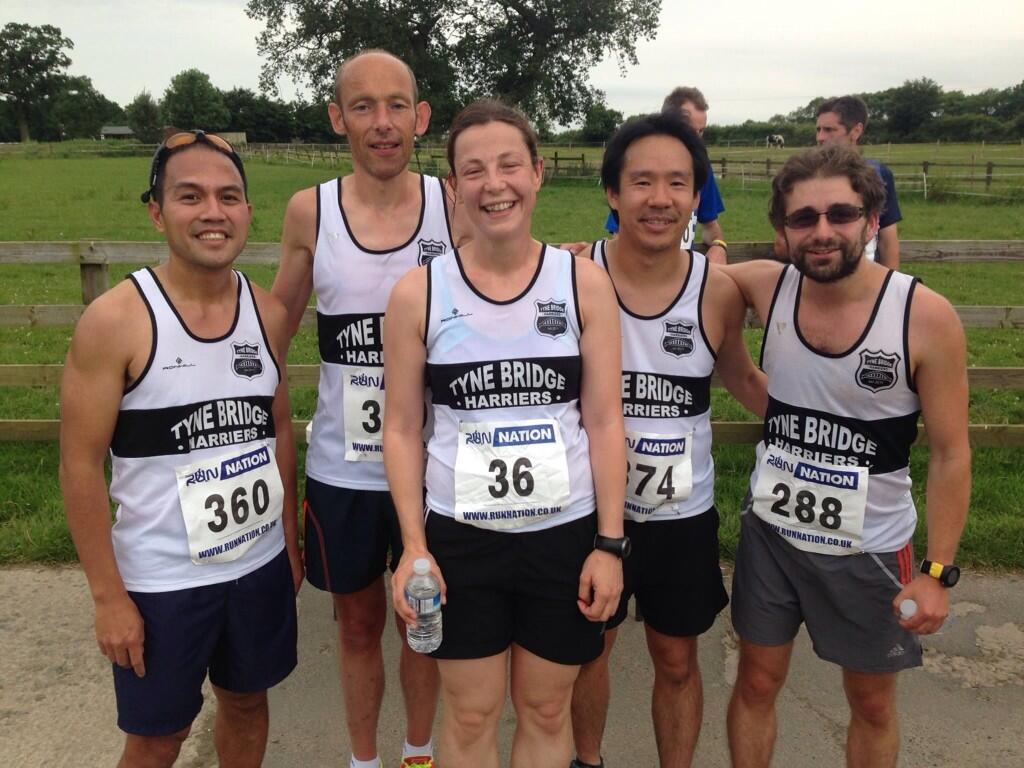 Some of the TBH team. (Thanks to Gary Cowell for the photograph).

Whilst all eyes were on the Weetslade Relays, Run Northumberland had other plans and held its inaugural midweek evening race. This was the Kirkley Hall 10k, run on exactly the same course as Ponteland 10k (the race in which I made my Tyne Bridge debut in Oct 2013 when I first joined the club). This fact was not lost on me, and it was this that convinced me that I should run the 10k rather than the shorter distance, a few miles East over at Lockey Park for a chance to visit a familiar race route and the opportunity to record a new course PB.

A week before the race, I was already aware that Alex Battersby and Michael Nemeth had entered so I knew I wouldn’t be a lone TBH runner. It was no surprise though that there were several other black and white vests in attendance, namely Andrew Dougal, Chris Sumsion and Joel Tepace – and at this point I must admit that thoughts of securing a team prize did cross my mind. With that, I looked at the other club vests and made a mental note that Low Fell would be the other club completing a men’s team so I knew who my targets were for the race.

The start of the race was actually a 15 min walk from the registration desk, so by 6:45pm we were all encouraged to head along towards the start – to join the cars, tractors and team time trial cyclists that were going to be joining us on the route. The 73 runners jogged over to the start of the course where the lead car was waiting. Whilst we waited at the start line, Chris asked me what my target time was – ‘low 40s’ was my reply to which his was, ‘I’ll try and keep up’. Shortly after 7pm, the race was on in what turned out to be perfect racing conditions, with a dry summer’s evening and only a mild cooling breeze.

There was a fast start, seemingly many runners keen to get away; perhaps making the most of the fact the first mile was the flattest – with only slight undulation. I decided to run my own race, keeping an eye on a few runners who I knew, such as Carl Watson (Low Fell) who I have had occasional battles with, would rightfully be a little ahead of me if running to form. I also noted the two leading Gateshead ‘gazelles’ who managed to steal around 15-20 seconds off of me in the first mile.

The rest of the course was undulating, with the second and third miles taking the runners to the highest point of the route – it was just before this point, when we made our first turn off the road onto a little track towards Wharlton that I decided to look over my shoulder to see who it was that had tracked me ever since the start – Chris had duly kept his word and was happily running alongside me. It was at this point that we made a charge through the field, upping the effort and making up 10 or so places including catching the two ‘gazelles’. By mile 4, I was eyeing up my next targets. I knew that every place could matter for the team prize, spurred on by thinking (in error) that there were still two Low Fell runners ahead of me.

The final couple of miles were tough, and with tired legs there was still a lot of uphill, but onwards – and I did ask myself whether the earlier efforts would have taken too much out of me? – I had one goal and that was to let no-one overtake me. Before long, I was within the final mile, so with one last push, I tried to make some ground on the runner ahead. I got closer, but not enough to trouble him as the finishing straight came into sight and I was over the line.

As I caught my breath, I saw Andrew and one Low Fell vest amongst the finishers. I was second counter (for TBH) and less than 30 seconds behind me was Chris with a strong finish coming in just behind the first lady. With that, we waited for the rest of the Tyne Bridge contingent and it wasn’t long before everyone was home in time for a team photo.

We had a moment to reflect on our performances before watching the prize giving and then heading over to the Blackbird pub in Ponteland for a refreshing drink. Notably, Alex decided to show us her massive blister that had caused her much pain for much of the race. Despite this, the consensus was that it was a race worth running and already thoughts were turning towards a rematch at the Ponteland 10k to be held (also on a Wednesday evening) in August.

So another race over – a modest turnout of 73 finishers but I have a feeling that these midweek affairs from Run Northumberland will grow in popularity. For me, I  beat my previous time of 46:55 and also as second counter for TBH managed to secure my first ever team prize

so all in all, a successful evening.

Some of the TBH team. (Thanks to Gary Cowell for the photograph).

Permanent link to this article: https://www.tynebridgeharriers.com/2014/06/28/kirkley-10k-race-report/