After the magnificent achievement of completing her 1st marathon, Anji Rippon reflects on the 2014 Liverpool Marathon.

Liverpool kind of happened by accident. I’d spent the winter months coaching my friend Sally Riding for her second marathon in London in April and did a lot of the long running with her in order to experience marathon training without the pressure of a race at the end of it.However running 18, 20, 23 miles without anything at the end of it is really stupid, so Paul Andrews and I decided to chuck a marathon in the end of it after all.

Liverpool Rock N Roll is the newest of the ever-growing RnR series that began in America. My impressions early on were that the organisation was brilliant, a really informative website and email info service and my first impressions were good.

Training for me was challenging but in the main I did enjoy it, and uncharacteristically only suffered with a few injuries including a trapped nerve and a ligament strain where I had gone over on my ankle. This did little to calm the nerves though and I had a major meltdown on the morning of the race just feeling like I couldn’t do it and didn’t want to.

Upon arriving at the start the nerves faded a bit and I enjoyed the atmosphere. We made it to the start at the famous Albert Docks in time to see my friends Phil Thomas, Joel Harrison and James Fowler from my second-claim club Trentham starting the half marathon. Seeing them really gave me a boost and a bit of calm.

We made our way to the baggage drop or “Gear Check” as it was called and the organisation again was brilliant. Toilets were available inside the Echo Arena and I was stunned to find there was no queue! Annoyingly- and this is my only grievance- there was no water available at the start and that didn’t help my nerves and the fact I was convinced that at some point I’d faint. 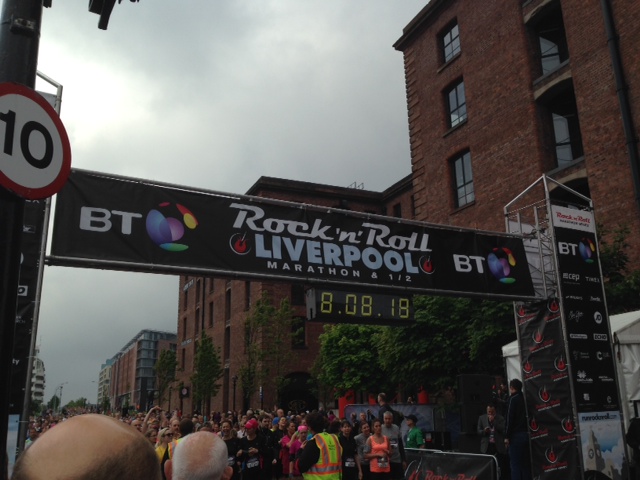 The start got under way at 9am and we started in the last wave of runners aiming for around 4:30. The start was fantastic, a little open downhill around the docks and straight out into the city. As we crossed the start we had a massive cheer from our very own Rob Wishart who was there to act as entourage and general groupie for the day.

I was thrown immediately as my waist pack opened at less than half a mile and emptied all over the road including the sacred jelly babies, my inhaler and money! I tried not to panic at the calamity of stopping and picking it all up, or that Paul announced he had a stitch already.The first few miles despite this disaster went over quickly and we took in the sights of the city: the Liver Building, cathedral and then out onto the dual carriageway to the west.

After this first climb we made our way out towards Goodison Park, on the way treated to the inspiring sights of tower blocks, people in their pyjamas and wasteland in which people had thoughtfully dumped their old furniture.

The loop around Goodison led us into the first park of what felt like around 300 of the day, where we saw the first turn back of the leader and my good friend Mark Cawadine who despite hollering COME ON ANJI AND PAUL and casually chatting to a fellow runner at his side managed to finish in 9th later that morning.

At just after 10k the path narrowed and we found ourselves tucked in with the 4:45 pace group, the only congested part of the day, which unfortunately led to a girl in front of us tripping and falling badly. Again this would usually panic me and I just tried my best to concentrate. The route next came to Anfield which was smaller than I’d expected and again the support there was great.

The hardest climb of the day -and there were lots- came at 8miles and it just seemed to go on forever. After PBing on a very hilly Leeds half two weeks ago, I tackled it confidently and it led us to a beautiful part of the course (in a park) where the views to the city below were amazing.We returned to the city centre at around the 10mile point where the support was loud and enthusiastic, as now a great deal of the half marathon had finished, proudly showing their enormous medals and cheering us on. After a sweeping mile past where we had started, we climbed (again) into Chinatown where the course gave us the only real narrow point of the day. It was fine for us using the Davy Anderson technique of calling out every single bollard and bottle around, but we did see someone trip and fall which again was hard to not get fixated on.My rough patch hit at around 12/13 miles in a park, funnily enough, where my heart rate was weirdly dropping, reminding me I have a heart condition and that there was still a long way to go.

I battled it without telling Paul for about a mile but when I started to feel sick I knew I had to tell him. Typical Paul was very calm about it all, and just said we could slow now for as long as it took before it passed. I almost immediately felt better that at least he knew, and thankfully the sickness feeling passed before we saw our first full-on collapse at the side of the road at around 15 miles, next to… Yep… A park.

The next 5 or so miles went over without a lot of drama, a few more parks, two more really big climbs and again a few rough patches of feeling sick. I must have been in the zone as the only thing I really remember from then was running briefly with John Tollitt’s brother, and the fact that we saw a man running and eating a strawberry calippo in, yeah, a park.

I have to point out here that it was also around 20miles where we discussed how un-rock and roll it had been, as many of the bands were either not at the band stations, were playing techno dance music, or were basically just rubbish. I love my music like I love my running but instead of being disappointed it made me laugh.

At 21 we started to head back into the city alongside a dual carriageway  where I had a brief emotional interlude with a man that was really struggling, wearing a Prostate Cancer UK vest. I told him he had to carry on, that my Dad has prostate cancer, and that he needed to run for him. The poor man started to cry, blew me a kiss and thankfully restarted at a comfy pace. The worst bit of the whole thing then happened. An 8 point turn round barriers, under a subway and back out the other side into- yes- another park. Words can’t describe what the turns felt like on my hips and hamstrings but they were accompanied by a littering of swear words from me and all those around.

They say this is where a marathon really begins but for me it was the opposite. I think it was about then that I started to relax and believe I was going to achieve my 4:20 target time. In training we had always stopped and had stretch and walk breaks and now we were back into the final stretch along the Mersey I had absolutely no desire to stop at all. I knew we were nearly done and I couldn’t wait.

We ran mile 22 with David Clare, a man I have followed on Twitter for some time completing a massive series of marathons and challenges and has always inspired me. Chatting to him helped massively and passed the time where now it was really starting to hurt.

The final stretch back into Albert Docks and in front of the Echo Arena was where I started to believe that I’d really done it. 5 months of training, numerous meltdowns, a great deal of negativity from those that willed me to fail and openly hoped I wouldn’t make it and here I was. It was hard to not get carried away but the sight of lots of people now walking and some poor collapsed soul right by the 25mile marker reminded me that it wasn’t in the bag yet.

The finish straight was the best feeling ever, and that’s where my emotions finally hit and I started to cry. I grabbed Paul and started telling him how hard it had been, how much I love him, I couldn’t have done it without him and loads of other stuff he already knew. He responded with “Do NOT do this yet or we won’t get there” and diverted his attention to Rob Wishart again ahead, brandishing his black and white vest and shouting our names like we were celebrities. Paul high-fived him and suddenly we were crossing the line in exact matching chip times of 4:11:08.We were presented with “those” medals at the line, photographed and sent into the arena where we were handed bananas, water, cereal bars and Haribo, along with our t-shirts. 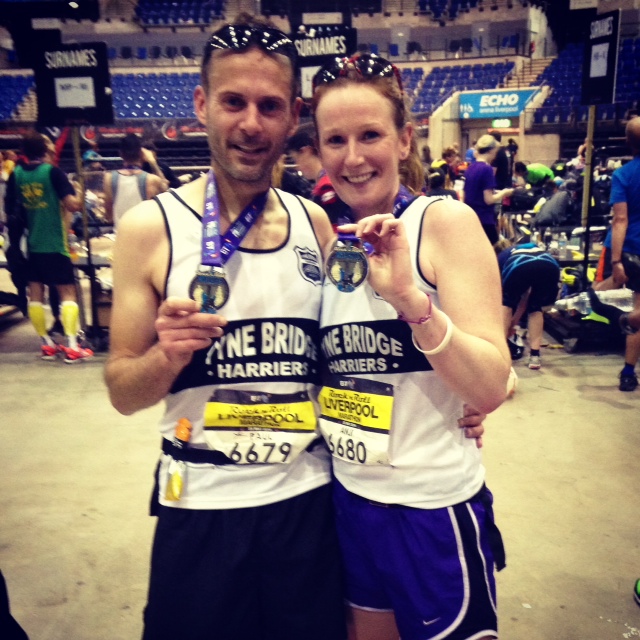 Paul & Anji with their well-earned medals

I think I was still crying for a lot of it and it’s all a bit of a blur. The bag collection was swift and we were now making our way out of the arena (up a flight of stairs I might add!!!) and out to the terrace where a gig had started. On exit you were handed a free pint of Cobra and I wholeheartedly now feel this should be a feature of every marathon. 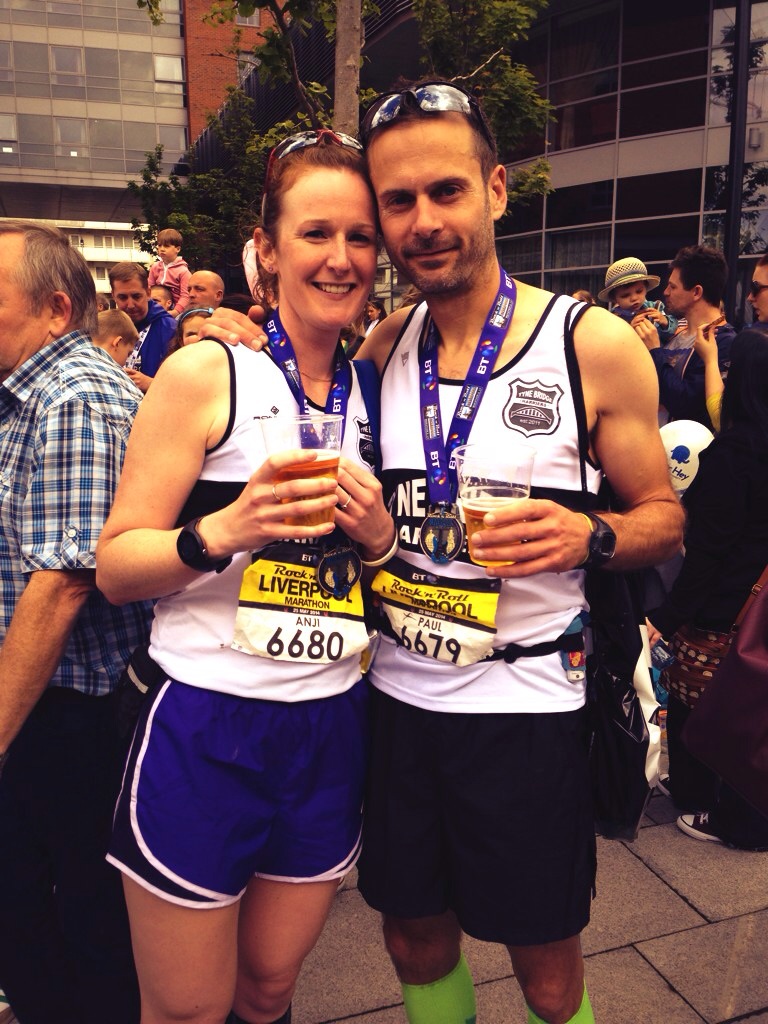 just what you need after 26.2 miles

We met our Trentham friends who had finished the half over three hours ago and happily greeted us with hugs despite how revolting we were.On reflection, the organisation at Liverpool was absolutely brilliant, the route was challenging, and if you like your parks it’s the place to be.Despite my nerves and doubts getting there, I will definitely do York Marathon with a positive perspective now that I can do it, and I will.Big thank you to all at TBH that supported me, well done to everyone who ran Edinburgh the same day, and thank you to those who wished me well, knowing how much it meant to me to get there. And thank you Paul. We rock! x 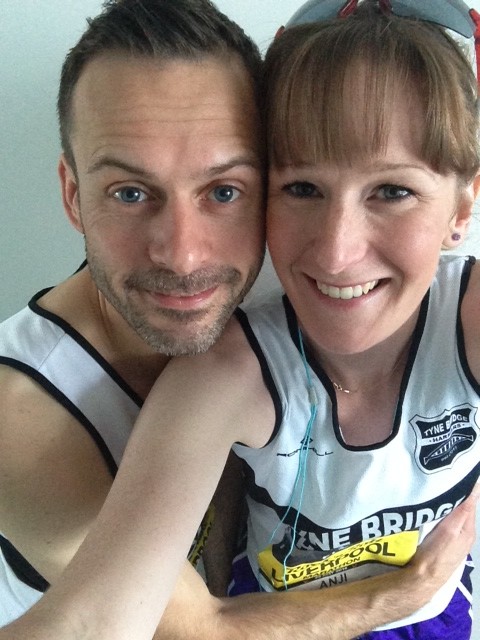 Permanent link to this article: https://www.tynebridgeharriers.com/2014/05/28/2014-liverpool-marathon-race-report/