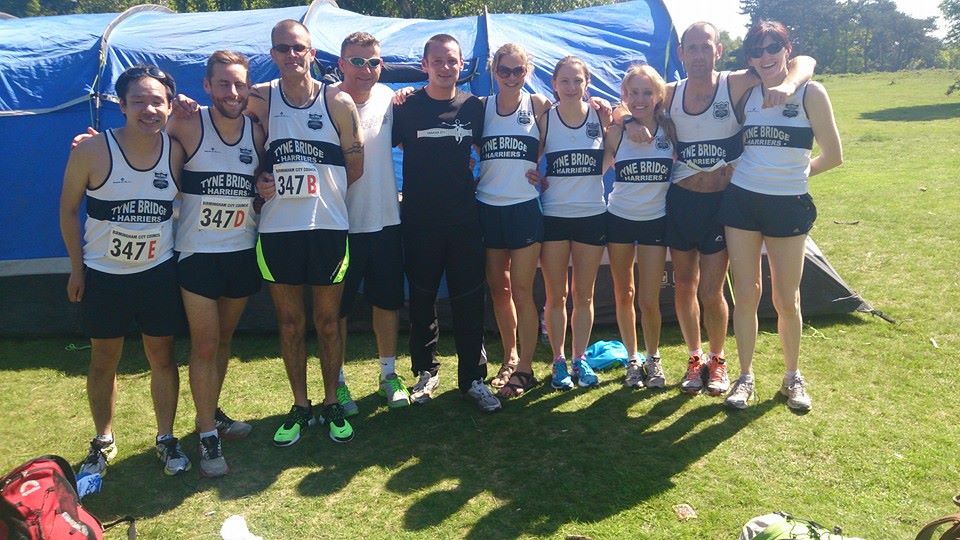 With a four hour bus journey ahead, people will do anything to while away the time. For Andy Smythe that meant writing probably our first ever race report on a bus.

I’ll be honest. I didn’t fancy it much. 4 and a half hours each way, for a 3 mile race on the hottest day of the year so far didn’t seem like the greatest idea I’d ever had. But our veteran team was depleted and the faintly desperate plea of Paul Hilton in the week – ‘you’re definitely sure you can make the relays?’ – echoed as I saw the sun rise at the ungodly time of 4:45am. On a Saturday when all my mates were planning boozy barbecues, I was taking a bus to Birmingham. But like the other 9 who made the journey down, I’m so glad I did. It was a great day and it belonged to the ladies.

The only major mishap was out of the way by 6am – Alan Hodgson had managed to throw the contents of a flask all over the crotch of his jogging bottoms, causing a suspect wet patch. At least that’s what he told us had happened… After that, it was all plain sailing. 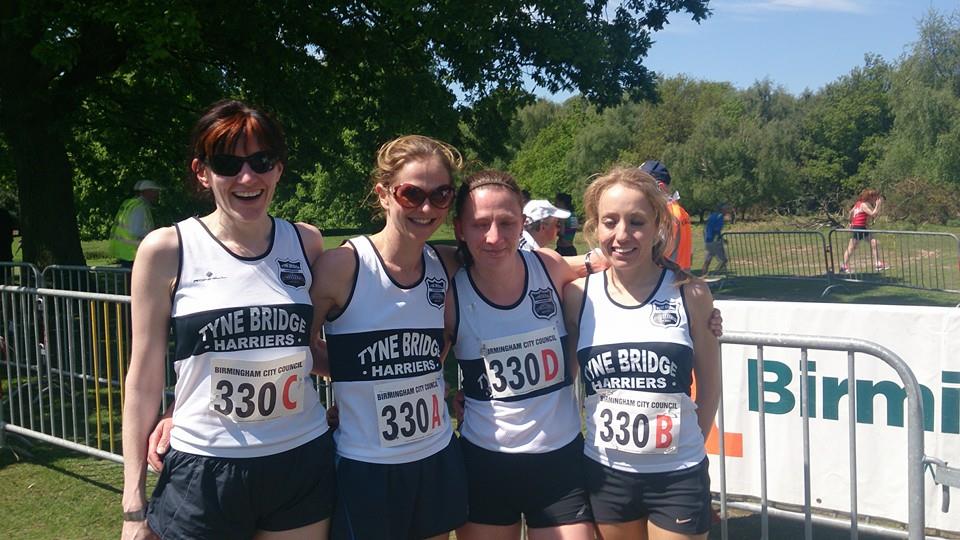 I don’t envy the women’s team at these events – scrabbling to put the tent up half an hour before a race isn’t ideal preparation. But how well they did. I’d jogged the first mile of the course with David Wright to a perfect vantage point, and saw Alison Dargie, leading the team out, taking on the front runners and kicking on down the hill past us. She’d put us in 3rd position after leg one of four, with a phenomenal time of under 18 minutes for the three-mile course. The blokes meanwhile, with two hours to wait, were sunbathing and picking their viewing locations around the course. I spotted Paul Hilton pacing the finish line counting runners, Mal Gibson, skulking around some bushes.

Great runs by Louise Rodgers and Lindsay Walsh who was carrying a niggle (NOT an injury, I’m assured!) set up Izzy Knox for a strong last leg. She’d travelled the farthest, coming down from Scotland and although she says she prefers ultra distances to eyeballs-out short races, she brought the team home in 6th. For a national event, that’s terrific going. The girls beamed. Louise bounced like Zebedee. 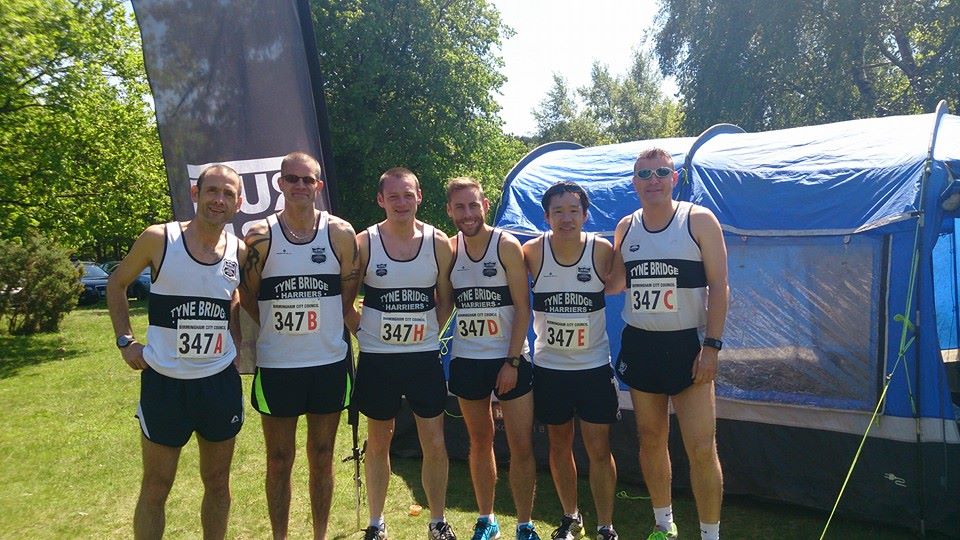 It was our turn. Sadly, the lads were to be overshadowed. Not by other competitors, but a cow and some horses. Alan Hodgson was leading us out. He’d talked psychology. Strategy. ‘It’s a hot day guys, keep it sensible.’ So naturally, he did a 5’12” mile up a big hill. Whoops. What happened next was inexplicable. Bear in mind we were racing in a country park, Alan’s last mile was hampered by a cow on the road. Being interfered with by an animal, he protested, had cost him valuable seconds. His second excuse of the day – only this time there was photographic evidence. Still, his 17’15” was the best time amongst us. David Wright followed with an almost identical time, Mal Gibson set us up with a solid leg and then it was my turn. 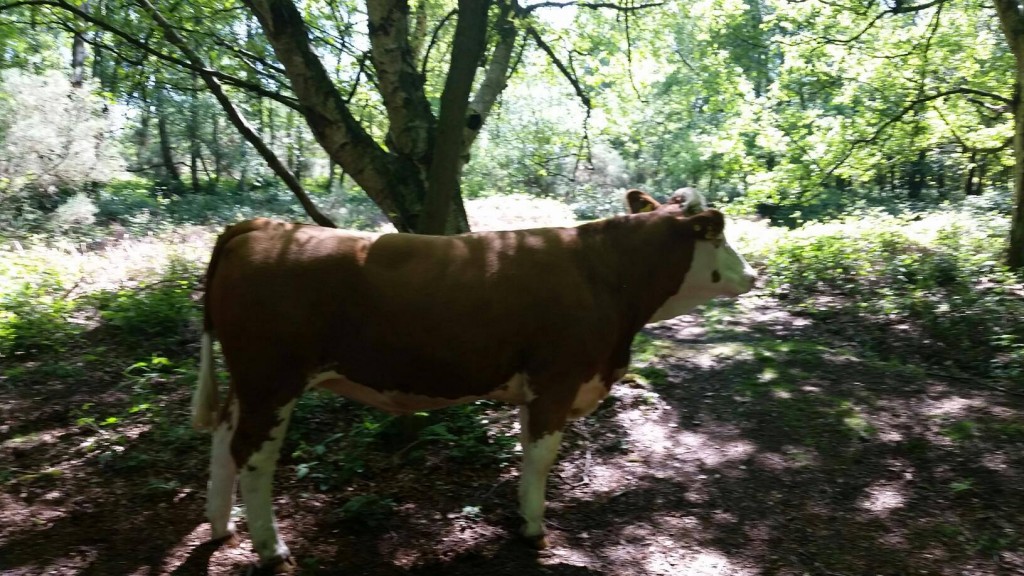 ‘the cow that hampered Hodgson

For those who’ve never done the relays at Sutton Park, it’s tough going. The first mile and a half is pretty much all uphill, which wouldn’t have been so bad if we didn’t have to feel the force of the early afternoon sun on the climb to the top. I’m currently practicing putting my Chimp in the box (not a euphemism, but a mind-coaching technique) and although my Chimp was screaming in agony after two miles, my head was telling me to make the bus journey worthwhile and put some bloody graft in. Given the heat and hills, I’m telling myself I’d done the equivalent of a PB.

I handed onto Edwin Wong who ran as well as he ever has done – he’s only been running properly since September and already has progressed from group 4 to 2. Then it was captain Paul’s turn to take us home. Whole teams congregated around the winding path, like cycling fans on L’Alpe D’Huez, waiting for their last man. 16 runners passed. Then a shout from Louise Rodgers. ‘Look! Over there!’ Heads craned.
‘Is it Paul?’ I asked. But Louise had spotted two ponies instead. So infatuated she was, that she’d nearly missed Paul bombing past, in the middle of a 5’30” last mile. For the record, the lads were 17th.

Today the sun shone for the ladies. Buoyant and on the day, officially the best women’s vet team in the region. They even won wannabe gameshow-host Alan Hodgson’s trivia quiz on the way home (although it would be remiss of me not to mention Mal’s general knowledge skills) Louise chose their ‘buzzer noise.’ Fittingly, a horse’s neigh.

Men’s results can be found here and the ladies results here.

Permanent link to this article: https://www.tynebridgeharriers.com/2014/05/17/2014-national-masters-road-relay-championships/