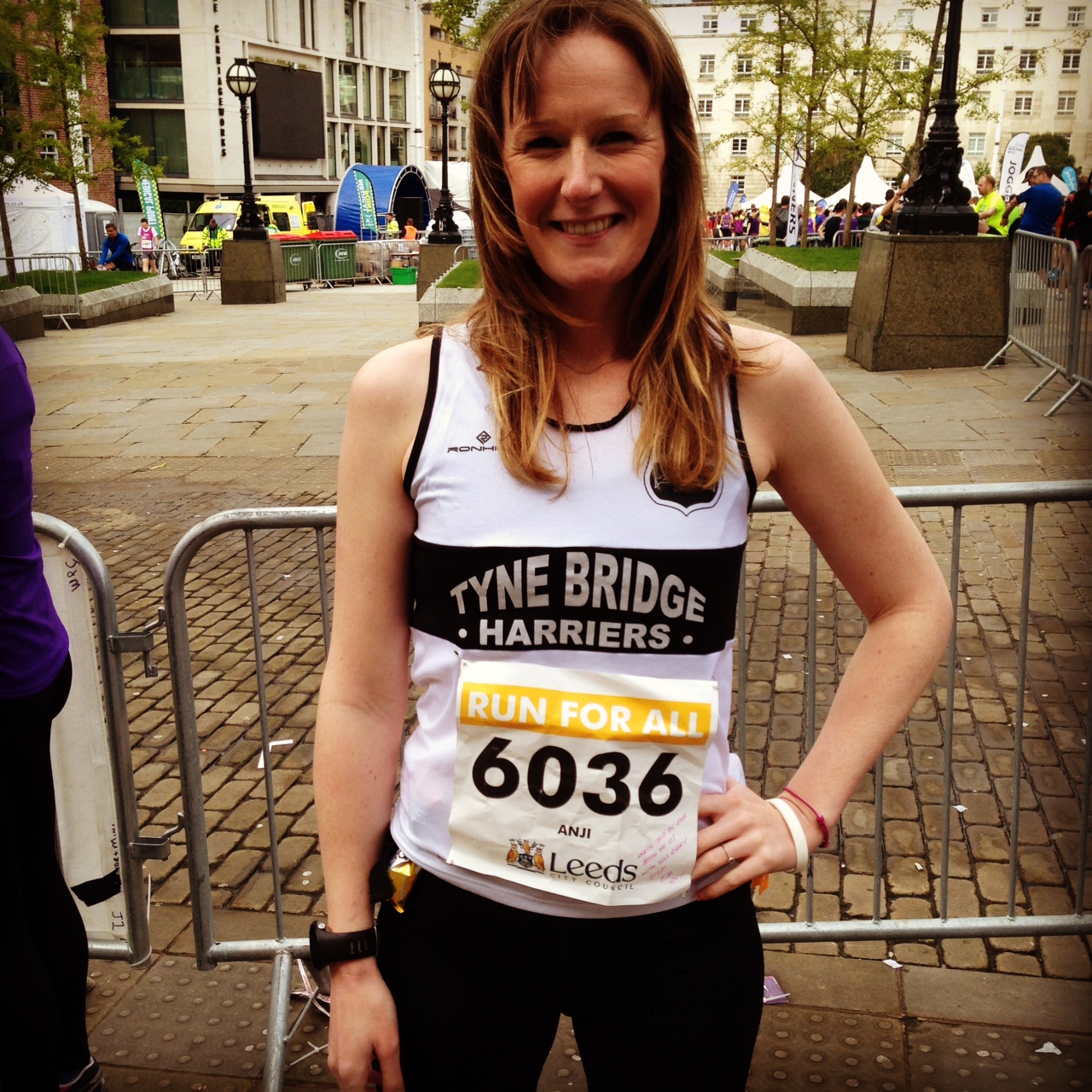 “So are you going to do this at marathon pace or full on smash the hell out of it?”This was a message I received the night before Leeds half that I had absolutely no idea how to reply to. The truth was I knew I was ready for Leeds but I just didn’t know how the day would go. Leeds half was one of the first races I entered this year before I’d made the decision to do Liverpool marathon. Some people questioned my decision to do both but the way Leeds fell into my calendar meant it was actually perfectly suited to drop into my taper. Weirdly when you’re at the peak mileage of marathon training, 13.1 miles really doesn’t seem that far. I peaked at 23 a few weeks before and had run 20 miles on a few occasions too.The plan had always been to run with Paul Andrews and use it as a confidence builder looking ahead to Liverpool marathon on the 25th. Plans never seem to work out and unfortunately Paul found himself with a nasty hamstring injury (medial semetendinosis) just a week before and for him Leeds was off, if only to guarantee Liverpool would be on.We drove down to Leeds stupidly early on the morning of the 11th in heavy rain and most of the journey was silent. I was unsure how to approach the race and Paul was in injured/grumpy mode. I was quite nervous despite knowing that I was completely well prepared. 5 months of marathon training gives you loads of practice for running a half. A few people had warned me it was hilly but I’ve never felt as strong as I do now and I knew deep down I would be ok. 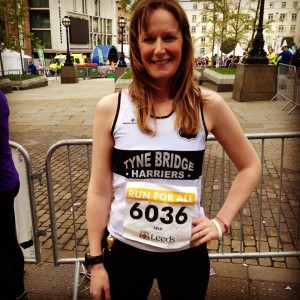 The start area wasn’t particularly well organised and I did feel that with over 5000 runners there should have been a waved or at least colour coded starting zone. I tucked in between the 1:50 and 2hr pacers but only because I couldn’t go any further ahead in the scrum. That said, once the start got underway it only took me just over two minutes to reach the fortunately-chipped start mats. The half started right in the city centre and the crowds there were fabulous. It was well over a mile before I realised I was actually racing as I felt I was just gliding along grinning at people like a lunatic.The first few miles flew over and although undulating didn’t present a great deal of challenge. I ran steadily at between 8:20-8:30 pace which I knew would give me a PB if I held on to it. I still hadn’t decided whether to or not by the way. After 2 miles things started to change. It was basically now quite a challenging climb until just before the 5 mile point. Mile 4 was my slowest recorded at 8:46 but to be honest I didn’t feel like it had been that hard. Again the crowds were fantastic, cheering and clapping, or just standing casually smoking a cigarette and blowing it into the path of the runners, at one point. There was a corporate relay event taking place on the course and often these changeover points were where the support was the best.I got a massive boost at the top of the hill at mile 5 where Paul Gibson was waiting with his camera, looking genuinely stunned as I flew past as he shouted out GO ANJI TBH!! He probably couldn’t believe I had actually been capable of running up a hill!Mile 5 gave me my fastest mile in 8:01 and it was probably my favourite point of the course. The race had turned on to a dual carriageway which had remained open (!!) and allowed runners one side of the road, barriered to the traffic that continued to pass along the right of us. I loved the distraction of the traffic, the crowds and the fact that it was now moving back downhill steadily. Running an 8 min mile worried me at that point but I tried to keep Stevie Cairns and Edwin Wong in my head, as they have both told me previously to just run to how I feel. I felt great! Mile 6/7 presented another incline which again I tackled fine with the added distraction of now battling with opening my sIs gel which was almost impossible. I managed to get it down eventually and was rewarded with a split time clock ahead that read 1:00 for 7 miles. Maths is not my strong point but I knew that I was on for a PB if I kept up my pace now,  especially now I had John Goldsborough in my mind who had told me once the 7 mile point was passed it was downhill and plain sailing home. I stupidly also started to think now about how much Paul would have loved the race, how great he would have done and how sad I was that he was stuck waiting at the end carrying all my stuff. I’m always quite emotional anyway but I started to feel like I was going to cry and this in turn have me the brief feeling that I was choking.

Man-Suit on and emotions back in check, the race weaved through some residential areas where again the streets were lined despite it now raining a bit, the residents clapping, cheering, handing out sweets and oranges and smiling at everyone. I thought how much of a nightmare it would be having 5000 people running past your house on a Sunday morning if you didn’t like running, but these people totally embraced it. Into mile 8 presented a bugger of a very steep and very long downhill into the last section of the race. And my god, it killed. My quads burned and I thought how ironic it was that I was less comfortable now than on those long early climbs. It seemed to go on forever.The road now turned back and joined for those who know it, the last section of the Leeds Abbey Dash 10k course which I did in 2012.  I knew somewhere along here I would see my chief cheerleader Becky Parkin and just before mile 10 I heard her before I saw her GO ANJI GO TYNE BRIDGE and in the distance, a lovely bouncing ball of black and white gorgeousness there. A quick high five sent me happily into the last stretch into the city centre.I tried to ignore my watch as much as I could but I was now aware I could see the 1:45 pacer not that far in the distance. The last few miles on  the dual carriageway are easy going but it was here that I felt aware that I was passing quite a lot of people that I had been behind for much of the race. I must have felt good because later on my Garmin I saw mile 13 had actually been my quickest of the day. The finish straight was fantastic. They have an arch just before 13 miles that you go under which says “SMILE PLEASE!! YOURE ALMOST THERE!!” and it’s here that the crowds are mostly packed and you start to really feel the atmosphere. It’s essentially like having two finish lines because just on the corner past the 13 mile marker you can see the Finish sign (up another hill, by the way) and again the crowds here are loud and encouraging. I heard a few GO TYNE BRIDGE and eventually heard and saw Paul to the right of the finish. 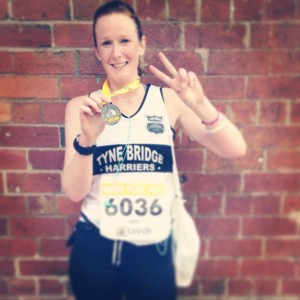 My finish in 1:48:56 must have looked rehearsed as I genuinely jumped into the air with my arms up, seeing the clock and quickly calculating how much I’d taken off my previous best (GNR 2013 1:54:54). It was an emotional finish again knowing what it would have meant to Paul to cross the line with me as I got that time.The finish area was well-organised and the finish packs were fantastic- no crappy sachets of stuff you never use, a great tech tshirt and medal, water and a Toffee Crisp. It actually took Paul longer to get to our meeting point than it did me, so swift was the organisation at the end.So yeah. All in all, Leeds is definitely now on my list of favourite all time races; a pb, great support, superb organisation and a challenging but rewarding course. I would definitely do it again.

Next stop… The small matter of the Liverpool marathon. 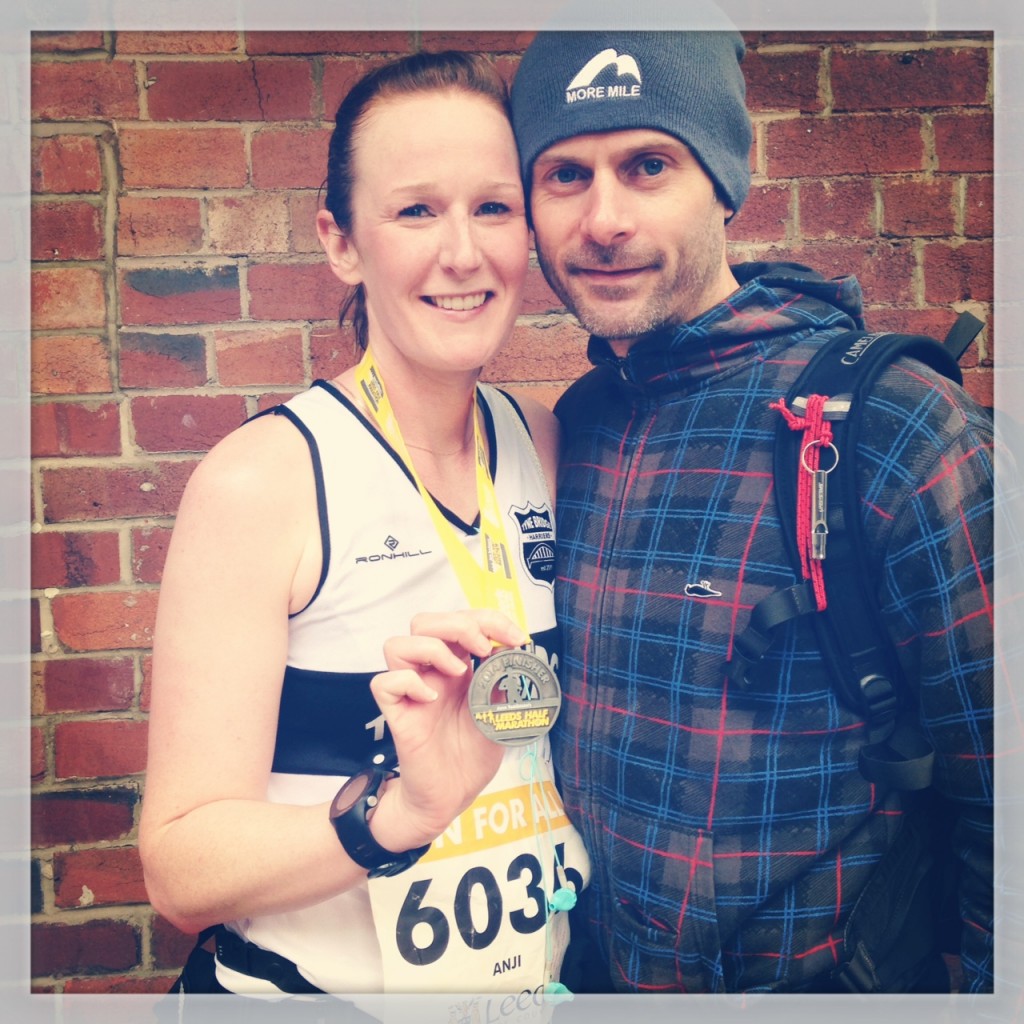 Permanent link to this article: https://www.tynebridgeharriers.com/2014/05/12/leeds-half-marathon-race-report/