After a bumper weekend of Marathon races the reports keeping flooding in. This, the second from Greater Manchester marathon, is written by a fairly new member to the club, Faye Slade, and highlights – as all the others have – that passion and determination are just as important as speed and stamina.

Like a lot of people, especially in the North East, I came to running through charity fundraising. My father died at the age of 44 from complications arising from type 1 diabetes and when the tenth anniversary of his death was approaching in 2006, I decided that I wanted to do something significant that would encourage people to part with their hard- earned cash in aid of Diabetes UK in his memory. Having not run since I was forced to at school, I decided that the Great North Run was the way to do this. Although completely lacking in athletic ability, I found the experience completely uplifting and decided to keep on running. Over the coming few years, my times slowly improved and I became more involved in running through other local events, parkrun and Active Newcastle, as well as continuing to raise money for Diabetes UK through the Great North Run.

In 2012, after completing GNR an hour quicker than on my first attempt and with my fundraising total in Dad’s memory at over £7000, I had to concede that the “slight niggle” I’d felt from Tyne Bridge onwards was in fact something more serious. Whilst having this investigated, and facing the possibility that running longer distances might no longer be possible, with questionable logic, I decided that if everything turned out ok, I’d run a marathon in 2014 and make my one and only attempt at 26.2 my fundraising finale. With even less good sense, I decided to tell everyone about my decision!

Thankfully, my injury turned out to be minor and I was back on the road by the end of the year….and I was unable to escape the public commitment I’d made to run the marathon! Despite the fact that I was aiming to raise money for charity, I didn’t want to be tied to the high totals required for golden bond places for London and when I failed to get in through the ballot, I opted for Greater Manchester, as I’m familiar with the city and, far more importantly, it’s the UK’s flattest marathon. This turned out to be the only good decision I’d made so far!

I found marathon training very tough. Luckily for me, my husband Mark (who runs with Heaton Harriers) also agreed to join me in this crazy project and we encouraged and supported each other through the months of high miles, zero alcohol, and (hardest for me, but not so much for him!) zero high heeled shoes.  Joining TBH in January was also a huge boost and I’ve been very grateful for the support and advice I’ve received from new friends at the club.

Manchester’s wet weather is legendary and the forecast for Sunday was pretty grim but amazingly M-day dawned dry. We were staying at the Premier Inn Old Trafford, just 500m from the start line and the hotel had thoughtfully laid on an early breakfast for the many runners staying there. Being able to fuel up and get to the start line easily helped to calm my nerves and before too long, I was joining the start area. The race started perfectly on time and the first 10km went well, with the flat profile helping me run evenly at my planned pace. Near Timperley, on a section where faster runners were coming towards us on the opposite carriageway, I spotted a TBH vest and gave the slightly surprised runner (you were looking strong, whoever you were!) a cheer, which gave me a boost.

Coming through the half-way point, the 5 hour pacer group caught up with me. The pacer was a wonderful gentleman, who was so encouraging to everyone and carried a set of speakers and an i-pod with him as well as spontaneously bursting into song and passing round jelly beans- the perfect way to keep a group largely comprising first time marathoners going.

Unfortunately, after a couple of miles, I couldn’t quite hang on to the group and found myself running on my own. The section from 25km to 30km was definitely the hardest for me- I was tired and the huge distance ahead seemed almost impossible. Luckily, the support around the course was fantastic and hearing so many spectators and volunteers cheer my name and tell me I was doing well (even when it felt far from true!) kept me going. I also focused on my reason for running and the many kind people who had supported my fundraising efforts.

At 20 miles, the spectators’ shouts of “Not far now!” started to ring true and when I reached 22 miles ahead of the time I’d clocked on my last long training run, I began to feel that being a marathoner could be a reality. At 23 miles, I yelled “One more parkrun to go!” and began visualising the course around the Town Moor, complete with appearances from regular parkrun volunteers.  In the last mile, the Theatre of Dreams (the finishing line) came into view and, although my old injury flared up a little and the stadium didn’t seem to get any closer for quite some time, the euphoria started to build. I crossed the line pumping the air…which then quickly turned to tears when I stopped and realised that my goal had been achieved. 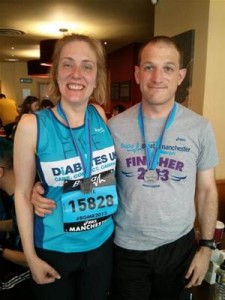 I’ve always said that my only marathon running aim was to be alive at the end (tick!), but I was very happy with 5:12 which was around where I had thought I might finish. The best and most emotional moments of the day were meeting up with my Mum and then Mark (who had finished in 4:35) as I came out of the finish area, still very much in shock that I had really done it. Most importantly of all, my fundraising total for Diabetes UK in Dad’s memory for the last 8 years is now over £9,000 for which I’m very grateful to all those who have supported me…and decisions made whilst awaiting MRI scans actually aren’t that bad after all!

You can still donate to Faye’s charity by clicking on this link.

Permanent link to this article: https://www.tynebridgeharriers.com/2014/04/08/2014-greater-manchester-marathon-race-report-2/