After reading of member’s exploits in Sheffield, Blackpool, Paris and Brighton, we now have a race report from Sunny Manchester, courtesy of Bam Rashid.
Greater Manchester Marathon: Sunday, 6th April 2014

Apologies for the late report but I have only just have the guts to write my 1st ever race report.
Well the day finally arrived, all the training done and feeling in tip top shape and ready to go. Got up at early at 06:00 for a bowl of oats and milk and then just chilled. I stayed over at my mates at the city centre which is miles away to Old Trafford. When I reach the starting point there were massive number of people and it was announced that nearly 7000 are doing the marathon instead of predicted 5000. I was trying to spot the two Tyne Bridger’s, Shaun Cowan making his debut and Adrian Brooks on his 8th marathon but they were nowhere to be found.

As ever there were long queues for the toilets and I was cutting it fine to get lined up. I got there with 2 minutes to go. Although the weatherman had predicted rain, the weather was absolutely perfect, cool and overcast. I was in looking for my section at the starting line and looking at 3:45 and 4:00 pacer then I met Adrian and Emma (Brooks), we had a chit chat, took some photos and without knowing it was about to start. I was very wary of being at the wrong side of the section but going back to where I was supposed to be would be hard as people are stacking up at the front. Adrian offered himself to pace me at 3:45 but I said to him that I don’t think that I would be able to cope with him knowing that I’m looking at least sub 04:00 which I do in 16 weeks training plan.  The race plan was to do a steady run for the 1st half at 9:09 min miles and race quicker in the 2nd half. 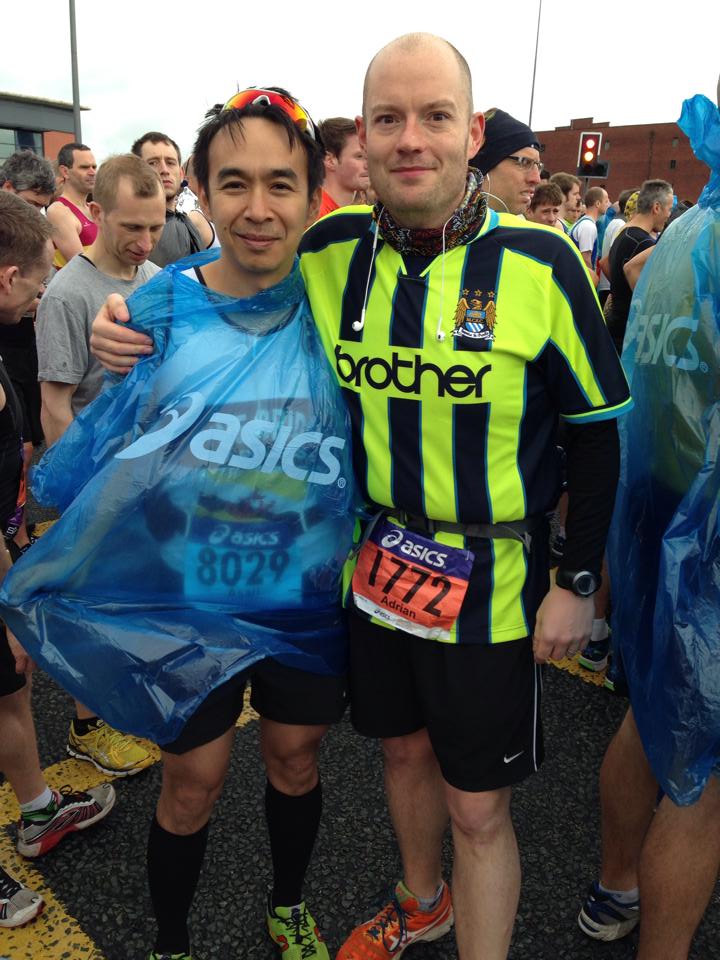 BANG!! The gun time!! I set off too quickly and this had been my downfall at every races that I‘ve ending up failing.  My pace was about 8:15 in the first 3 miles. Realising that, I slowed down a little bit at 8:30 which still considerably quick than my race plan. I maintained that pace thinking that this is quite a comfortable pace for me and start to change my race plan right on the spot which turned out to be a disaster in the end. I saw Emma Brooks twice giving me her shout and support (She said to me after the race that I was actually roughly around 5-6mins behind Adrian). By the time I reached 18miles it finally hit me after running comfortably.  My left calf started cramping and to my thinking my sub 04:00 will be over. After a while, I saw the 03:45 hour pacer passed me by. The hope is still there with the 04:00 pacer still somewhere behind me, nowhere to be seen. To be fair there wasn’t too much scenery and a lot of the course was flat with few gentle hills but there were some great support from the bands and dancers all around the course and residents giving away jellies, well cut oranges and even cakes. I set my slower pace and keep on running at 09:30min mile to save my legs.
At the next two mile I can feel that both of my thighs started to cramp and now I knew that it was definitely over. I had to walk run walk in pain and this is when the 04:00 pacer passed me by. What really keep me going in my pain was there were few people shouted at two separate locations “Go on Tyne Bridge Geordie Lad!!” he doesn’t sound Geordie and I don’t look like one. I smiled, nodded and shouted to them, GO NEWCASTLE!! As we got to Altrincham the support built up and the crowd really picked me up and  with 2 and a bit miles to go I could see Old Trafford and managed to pick the limping pace, went left turn onto Sir Matt Busby Way and the planned “sprint finish” turned to “walk finish”.
My chip time came in at 04:12:50 hours, 13mins behind my target but 44mins PB from Belfast Marathon in April last year (that’s the strength I’ve got since joining TBH last year). After getting my medals and goody bag, I sat down thinking what I’ve done wrong, analysing what was happened and then there were Shaun Cowan taping my shoulder and Gemma Cowan just right behind me. He completed his marathon debut in 04:17:24 hours. It’s good to see his wife and kids giving him big hug for his achievement. They must be proud 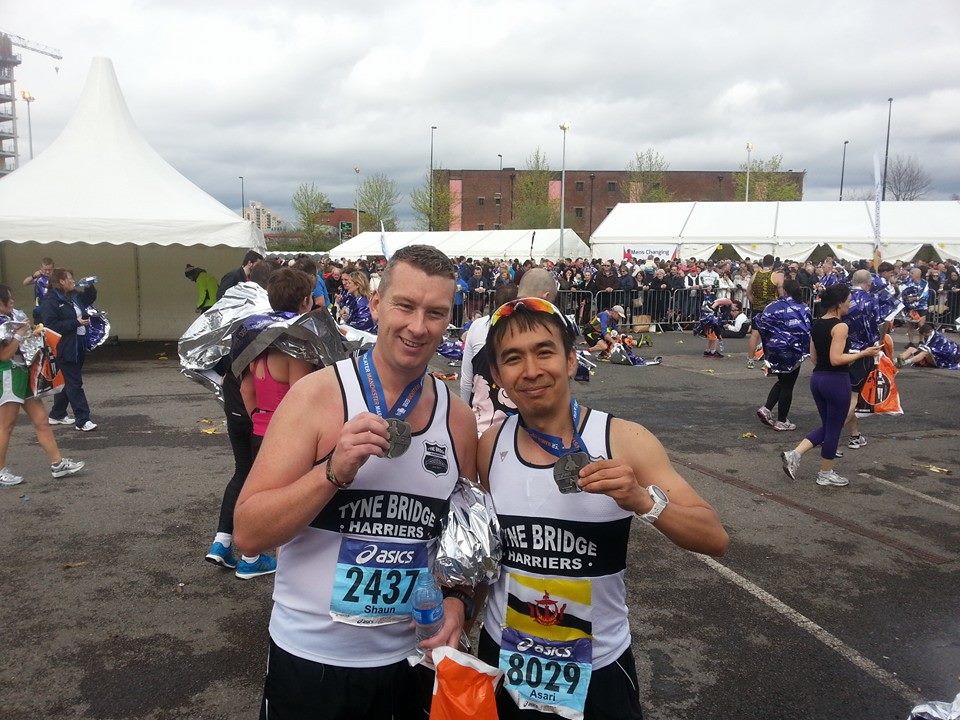 Adrian and Emma brooks are nowhere to be found but we were actually on the same train going back to Newcastle where we spent talking all the way to Darlington where their stop was. He had a massive 8 mins PB clocking at 3:29:45 hours.
I must admit this race is a lesson learnt to always stick with the race plan. Never stop fighting until the fight is done. That sub 04.00 will hunt me down and Manchester marathon will be my Everest next year. I just can’t wait to run with the TBH gang in Edinburgh Marathon next month. See you there

Permanent link to this article: https://www.tynebridgeharriers.com/2014/04/08/2014-greater-manchester-marathon-race-report/