Two intrepid TBH’ers, Alex Battersby and Anna Brough, braved the Eurostar to Paris for the marathon.

We bid au revoir to the English smog and said bonjour to the land of snails, wine and can can girls! (Sorry Davy Anderson – a distinct lack of kiss me quick hats!).

Entry to the Paris Marathon was simple as there is no ballot and it’s first come first served. It’s perhaps a bit more expensive than some but the earlier you enter the cheaper it is.  This was Anna’s debut marathon and Alex’s 10th official one (don’t talk about the New York debacle!)

Numbers have to be picked up in person in advance (but I think you can nominate someone to do this for you but they have to take your photo id). It’s open for the week leading up to the Marathon and all day on the Saturday. It was pretty straightforward but you do have to take a medical certificate and photo ID as well as your printed confirmation of entry with you! The location of the expo is portes de Versailles which is easily accessible on the metro but a good half an hour out of the city centre. There is plenty to keep all running geeks amused and plenty of places to spend money on new kit! 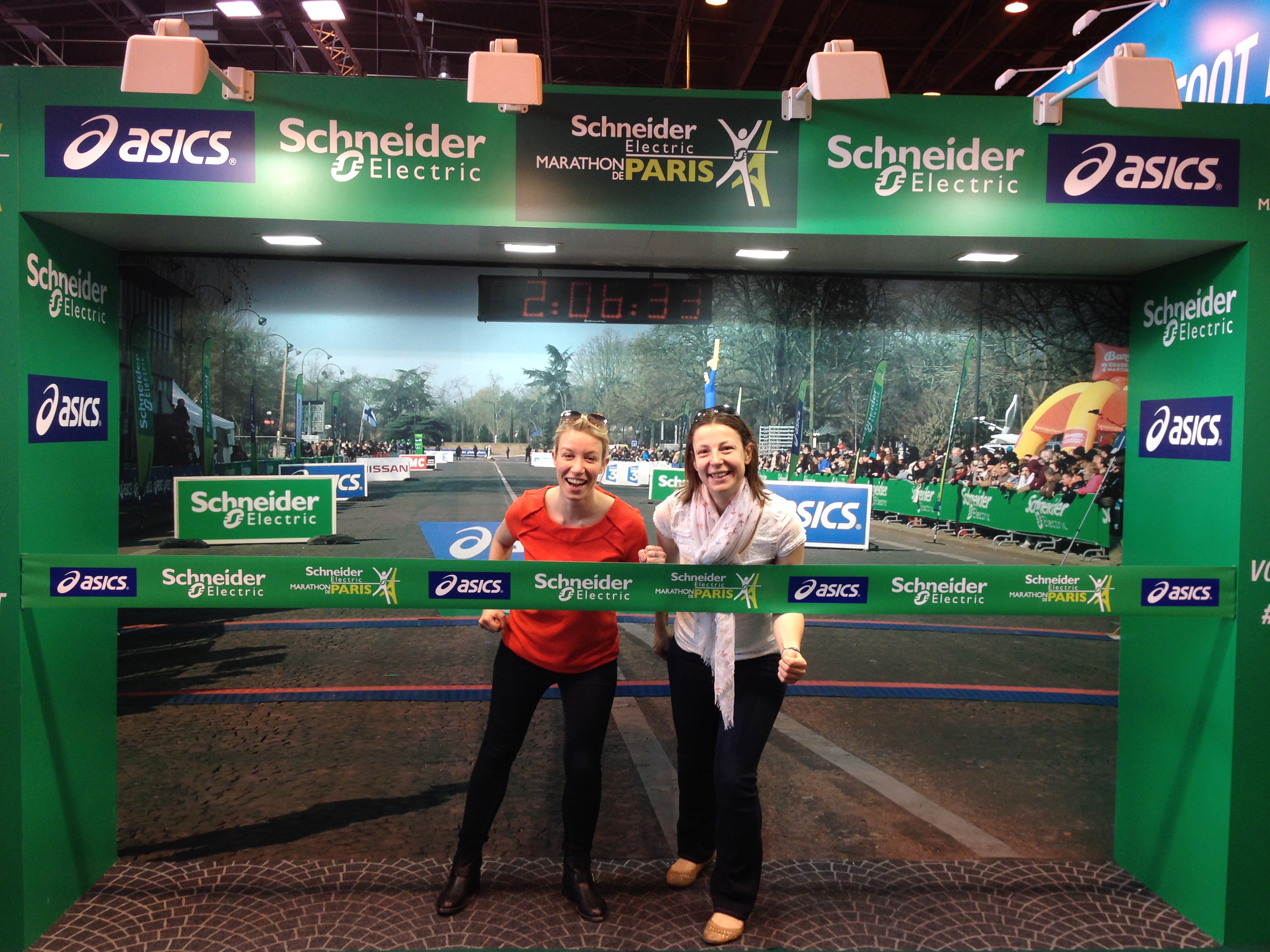 Anna and Alex at the Expo.

The start is at the Arc de Triomphe and there is plenty of good and not so good accommodation around this area. We stayed within 10 minutes walk at the Westside Hotel which we would recommend. It’s an early start with pens closing for some at 8:25am. Alex’s experience from last year meant that we arrived in plenty of time as later on getting into the pens becomes very tricky. The baggage drop is well organised and efficient but is a few minutes from the start and the organisers suggest you allow 25 minutes to drop a bag. Toilet queues were inevitably long and some people were forced to wee along the Champs élysées (probably one the most glamorous squats possible but not ideal!). Although as this was France few people were bothered! The waves went off separately but promptly meaning it was easy to get into your own running space and pace!

The route is truly fantastic and a tour of most Parisian sites! The route is flat in the main and the roads are traditional wide European boulevards meaning there is very little bunching. En route you pass Place de la Concorde, Notre Dame, the Eiffel Tower and numerous others as well as a good few miles through lovely parks. The support is phenomenal. There were some excited shouts for TBH accompanied by shouts of ‘we love the toon’. As the split of runners is 20% female to 80% male there is real excitement for the girls and the supporters take delight in cheering you on by name! It’s also a great course for supporters as due to the fact it is a loop it’s easy to spot your running friends at multiple places with relative ease. Down by the river there is a trickier section as you have to run through a couple of tunnels (one of them dark lit only with disco lights  and playing 90s French disco music – mixed opinions to this!) and subsequently up a few of the underpasses but as I said overall it is fast and flat. For those not chasing a PB there is someone giving out cider at about 25 miles! Our favourite sign seen on the way was ‘your feet hurt so much as you’re kicking so much butt’! The weather was perfect although perhaps a bit too hot for people who have trained through the winter in the northeast! Both of us ended up a bit sunburnt! The water stations were frequent and included fruit and sugar cubes!

The finish is exactly what you want for a marathon! A street lined with excited supporters willing you on into an iconic finish line in front of the Arc de Triomphe. Again this was well organised with t shirts, refreshments and medals. Goody bag had been collected at the expo. It was easy to navigate and quick reclaim bags and meet up with loved ones!

We spent a pleasant evening drinking wine to celebrate having decided to stay on Sunday night. It’s possible to leave on the day of the race but you may have to forego a shower before travelling in order to do this!

Overall, an excellent marathon experience and PBs all round! We would recommend you add this to your to do list!

Permanent link to this article: https://www.tynebridgeharriers.com/2014/04/07/2014-paris-marathon-race-report/