A quick check on Facebook early this morning, saw the misty sights of Wallsend displayed by Sparrow. However this did not deter me or any of the many other TBHers from turning up to the race. This is actually the most local race to me so it would have been rude not to turn out. Almost immediately after parking, myself and Lucy Matheson soon bumped into two other black and whites. One of them was Keith Rooney who we spotted despite his camouflaged trousers. We had seen half a dozen more by the time we walked into Segedunum and had posed for a group photo with our roving reporter, Mr. Morley. 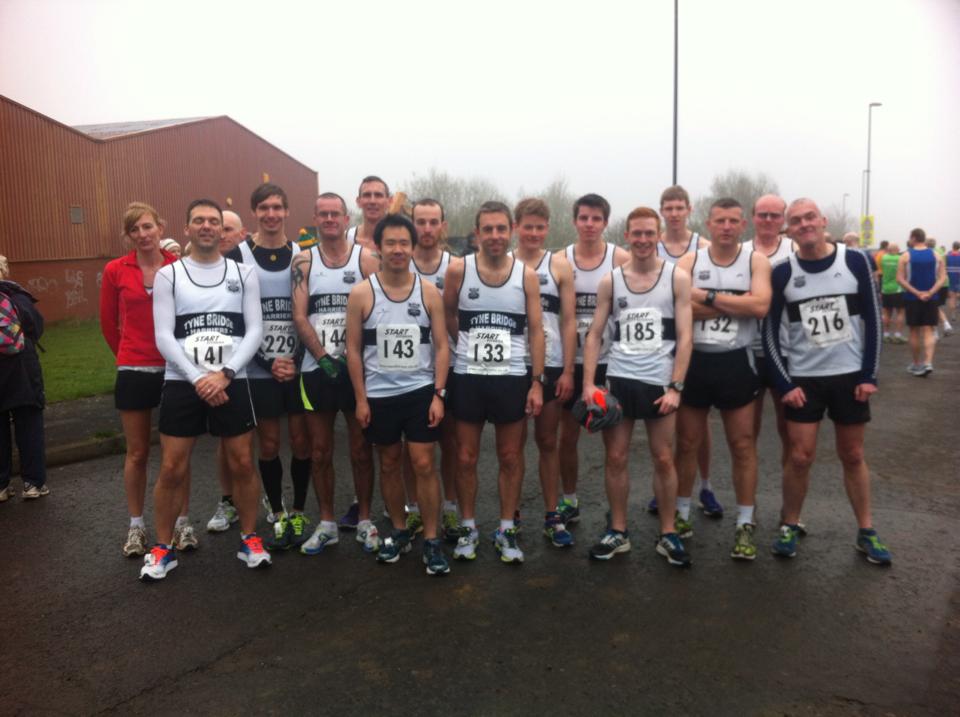 1600 years ago Segedunum (meaning strong fort) was home to hundreds of Roman soldiers. They were defending the most north easterly point of their empire. Today a few hundred runners would bring life back to one of my favourite places.
The mist had cleared a bit and it was actually quite warm by the time we started. As usual TBH seemed to have runners right through the field so my apologies for not mentioning everyone. The front end of the field included Ian Hudspith, Yared Hagos and our own Marc Fenwick. They seemed to disappear fairly quickly. Perhaps someone had told young Fenwick that the prize was a mixed grill….hmm.
After a mile that included a steep downhill and a long slight incline I found myself just under 6 minutes and just behind new group 2 recruits, Rooney and Edwin Wong, a rising star of the club. Surprisingly, I didnt feel to daunted despite it being a few years since I had been at this pace.
Not wanting to push on and tire myself, I spent most of the next mile neck and neck with my main rival who I wont give a third mention to in one report! As always there was plenty of support. As we passed the front of the fort TBH support could clearly be heard and believe me it was very welcome.
As we came towards the 4km point up the long slight incline for the second time, I found Mr. Wong who had got away was now coming back to me. And the words of the whipper snapper Nick Pearson spurred me on as he had predicted Edwin would get the better of me today. The battle between us ensured we passed a couple of elite girls and a decent local vet who I hadn’t beaten for a few years. Realising I was doing a decent time meant I wasn’t too bothered as Edwin went past me with 400m remaining. I did however surprise myself by over hauling him in the short sprint into the car park. Edwin did however get a North East masters bronze.
On a high it was time to find out how others had done. Marc Fenwick had been our first counter home in 7th place. Sparrow narrowly was pipped to 12th place by my old team mate James Buis who is now at Border. Some other great runs put a few TBHers under 17 mins.
Alan Hodgson narrowly defeated Kenny Mac in the battle to be our first master home. It later transpired along with these two, I had won the North East Masters gold team medal as the 5km championships had been incorporated into Terry’s memorial race. Sadly Alan was running his last race for us. I’m sure all our athletes will agree as I wish him all the best. Alan and Kenny both received individual awards as well.
In the ladies race, Lucy had finished second in her age group with a pb of 20.05. Kerry Reed also got a medal in her age group. Mentions must obviously go to Chris Chase who broke 20 mins for the first time with a large 50 sec pb and Becky Parkin who must surely be a candidate for group 3 as she gets close to 21mins for the distance.
A nice cup of tea and the job of collecting many prizes rounded my day off. The presentation was loud and interesting to say the least. Anyone over 35 should seriously think about joining North East Masters. We are becoming one of the most successful clubs in the organisation. My thoughts turn to those Roman soldiers.
Mal Gibson, TBH Coach (and dare I say athlete again ha ha?)
Race results can be found here and information about the North East Masters can be found here.

Permanent link to this article: https://www.tynebridgeharriers.com/2014/03/31/terry-ogara-memorial-5k-race-report/