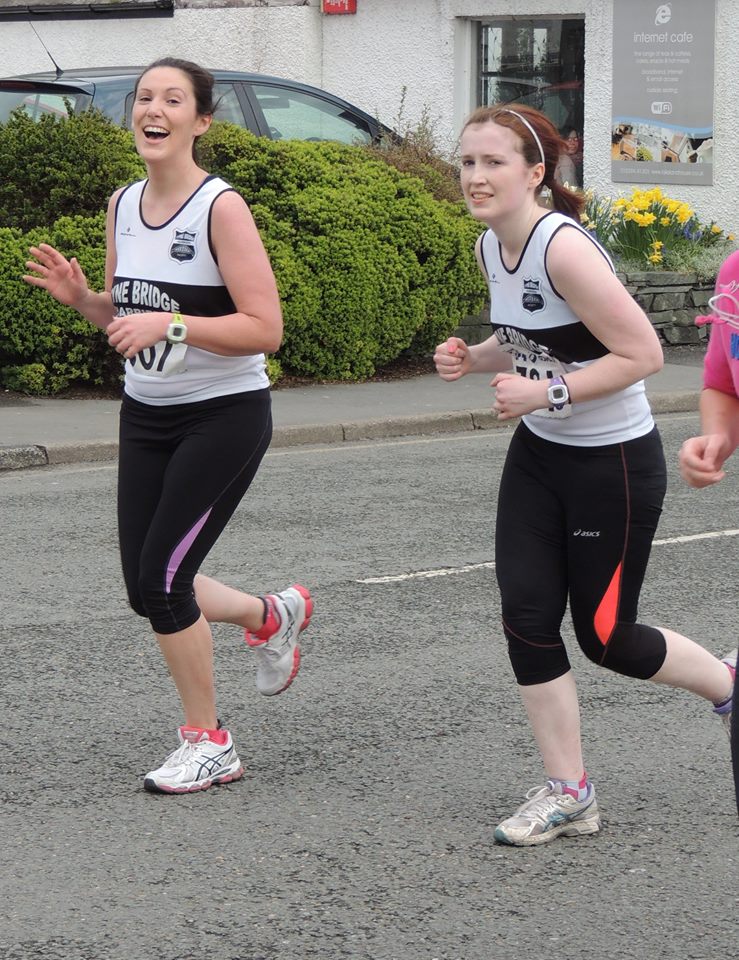 It was ‘party time’ for Katie Monnelly and the other TBH’ers in the Coniston 14.

I am new to running. I definitely fall into the trap of having a great club training session and then signing up to a race while I’m on a high. And that’s how I found myself signed up to run Coniston 14. Claire Norman sold it to me with the line “it’s the most beautiful road race in Britain”. How could I refuse?

Friday night’s discussions resolved around what we were eating for tea and what we were planning to eat for breakfast the next morning. Safe to say we were all feeling a bit nervous about the race. On Saturday morning I woke early but fell back to sleep. I had a dream. In my dream I woke at 11:30 to find I’d missed the race completely. Also in my dream Laura and Claire reassured me that we could find something equally challenging in the Heaton area and we came across a group of Tyne Bridge Harriers doing egg and spoon races. Although this was only a dream, I think it should be considered for group 4 training in the near future…

Anyway I didn’t sleep in. Claire, Laura and I left at 07:30 to drive over to Coniston water. Our soundtrack was Haim’s album. We joked about their song “falling”; now we had a song to sing to anyone who fell during the race…as you do. In another car Cees, Henrik, Sara and Kev were making their way to Coniston. I believe they got 10 minutes down the road but had to turn around because someone forgot their Garmin. I’m not gonna name names but he was Dutch. Also running for Tyne Bridge were Jo Wood, Catherine Eaton, Vicky Cuthbertson and Matt Collins. I don’t know how they got to Coniston; it’s a mystery to me.

When we got to Coniston we parked and queued for the portaloos, again, as you do. A man with a loudspeaker told us to make our way to the starting line. Men with loudspeakers command a lot of respect. And all of a sudden we were away. Apparently there were about 1,500 runners. We were told that it was a hilly course and sure enough we went straight up a hill. Another runner had told us that there was a hill from mile 11 through mile 12. We weren’t sure if this honesty was the best motivator for us.

At about mile 3 a woman fell. We stopped to help her up but she was fine. We forgot to sing our song, a truly missed opportunity. Claire and I trundled along together and at mile 4 a spectator shouted out “howay Tyne Bridge, howay the Geordies”. We smiled politely not having the time or the heart to tell him that neither of us are locals.

Coniston 14 truly is a lovely scenic route and it was also quite sunny! Sunglasses and sun-cream wouldn’t have gone amiss. Undulating is how I’d describe most of the course though for every hill there was usually a nice downhill. After the 7th mile Claire started to comment on the hills. This usually involved an expletive. We also saw some lovely sights on the course. There was a guy dressed as a jigsaw puzzle piece for cancer research. He must have been warm. There was another man who had very flappy shorts on which exposed him from behind. He must also have been warm but had found a method to manage this.

There were 4 water stations on the course and we took advantage of every one. They used paper cups which was nicer for the environment I guess. They also had wheelie bins for us to throw them into. I must admit I didn’t always succeed, sorry environment.

Once we got to mile 11 a spectator commented that there was a b*tch of a hill ahead of us. Again this was not very motivational but we thanked her for the information and the cheering, mostly the cheering. Photos were taken at the top of the hill which was funny for the photographer I imagine. Phil Scott took photos of the Tyne Bridgers finishing, and also the jigsaw piece man for good measure. He told a man and his daughter standing nearby the names of the TBH runners and the man shouted out their names in support. Apparently this was quite a surprising experience for some TBH runners, who was this man? Also spotted was a blind man in his 50s running with his guide dog. He completed the course in around 1:45, impressive stuff.

Anyway we managed to complete our loop and end up back at the school in the village very relieved indeed. Most of the fun began at this point. I decided that rehydration with isotonic drink was a good idea. Unfortunately I was so thirsty that I had four cups of it. More unfortunately it all came from a big black barrel managed by the village children… reassuring… more on that later.

As we waited on the side line to cheer Laura and Sara home we saw a man who clearly had not applied enough Vaseline. The sight was rather shocking and a new visual experience for us both. Note to future spectators, Vaseline appreciated. And then the more pleasant sight of Laura and Sara appeared. It seems as though both of these ladies had an interesting run. Laura did not feel herself and her comments made the final few miles quite interesting for Sara. I believe that Laura’s reaction to being given a love heart sweet saying “party time” was perhaps overly positive and cheery. Poor Laura ended up in the First Aid tent after collapsing over the line. Apparently she was quite reluctant to lie down, could not remember my name (“the other one” is my new title), did not seem to know what a hoody was for and was adamant that she would not drink coke to raise her blood sugar level as she did not like it. She had also forgotten to stop her Garmin – the most serious sign that something was wrong. Laura came back to her normal happy self after about 20 minutes just as my overload of isotonic drink started to kick in. I then took her place with a very unhappy tummy. Eventually we gathered up our things, including our mementos of the race which were coasters made of slate and made our way back to the car. I let Claire drive for about 30 minutes before getting sick in the back of her car. I had a sick bowl from St. John’s ambulance at hand though, I’m considerate like that.

Feeling slightly better we continued on our way. My satnav seemed to decide that rather than getting two sick girls home efficiently we could all do with some tourism in the Lakes. It sent us over the Kirkstone pass. Claire decided that this was the highest road pass in Britain and we all decided to agree and to try and appreciate it more and distract ourselves from our physical misery. I’ve since completed some research (via Google) and found that this is not true. However at the time the experience was magical. We regret nothing.

Great/interesting runs from all on the day. I know Catherine has run Coniston before but I’m not sure who else has so hopefully pb’s all round. I would recommend Coniston as a course and now that I’m feeling better I can say that I enjoyed the experience. Note to self, do not have copious amounts of isotonic drink from a barrel again. 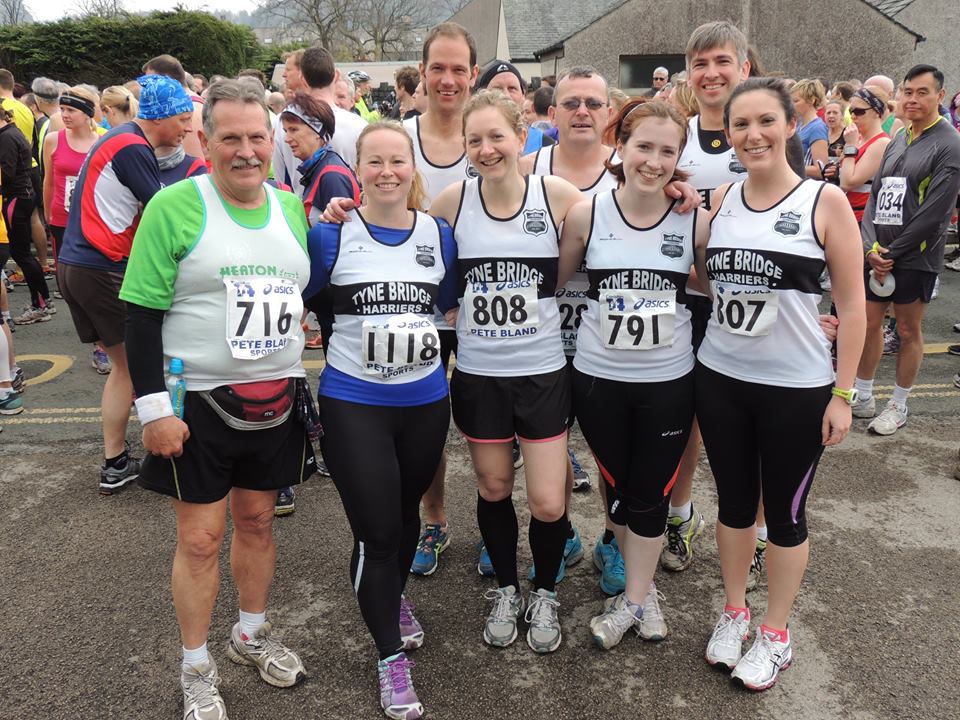 Some of the TBH crew (together with George Routledge – Heaton) 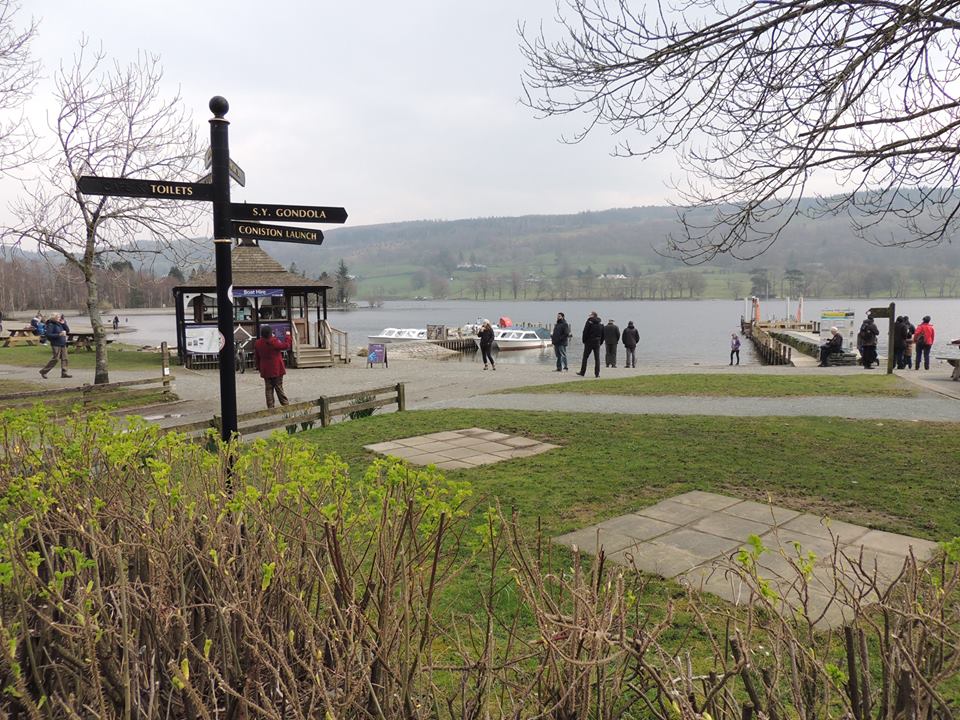 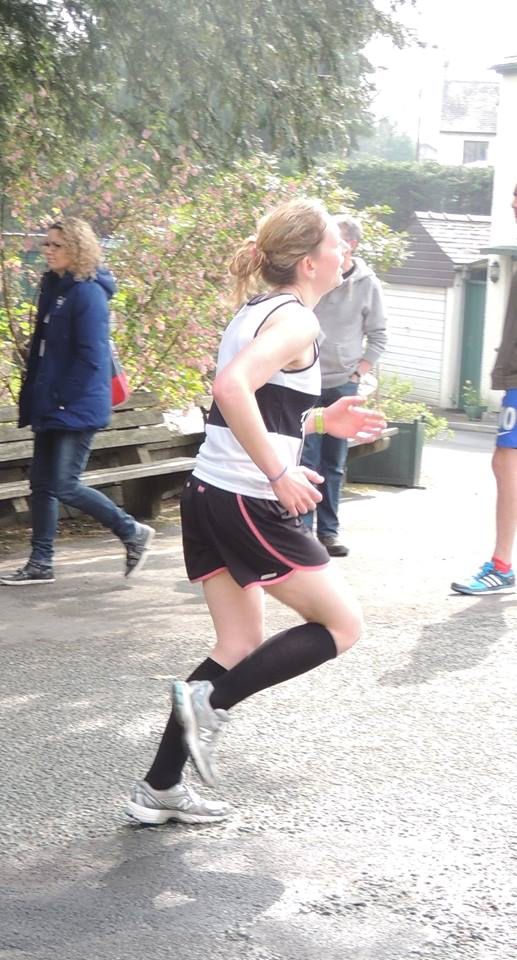 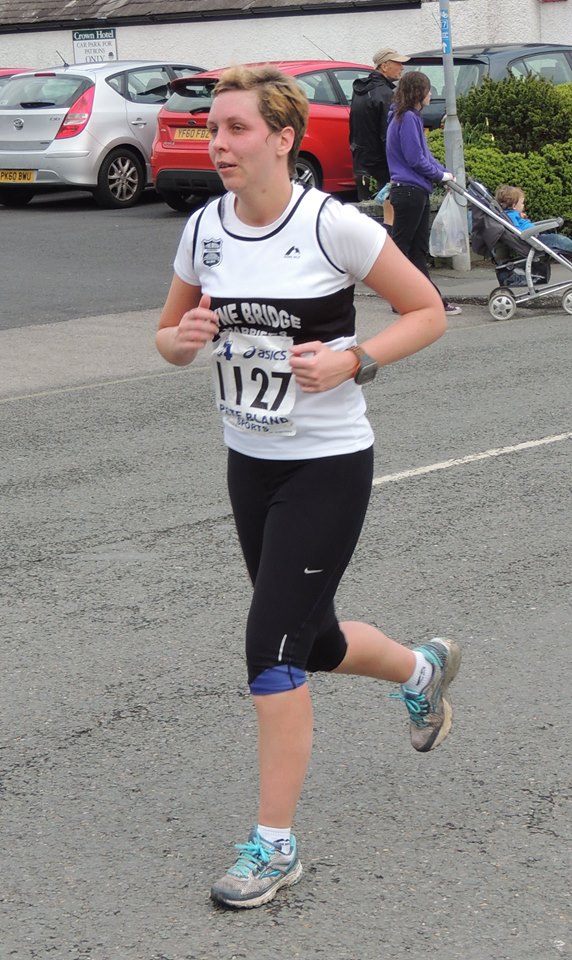 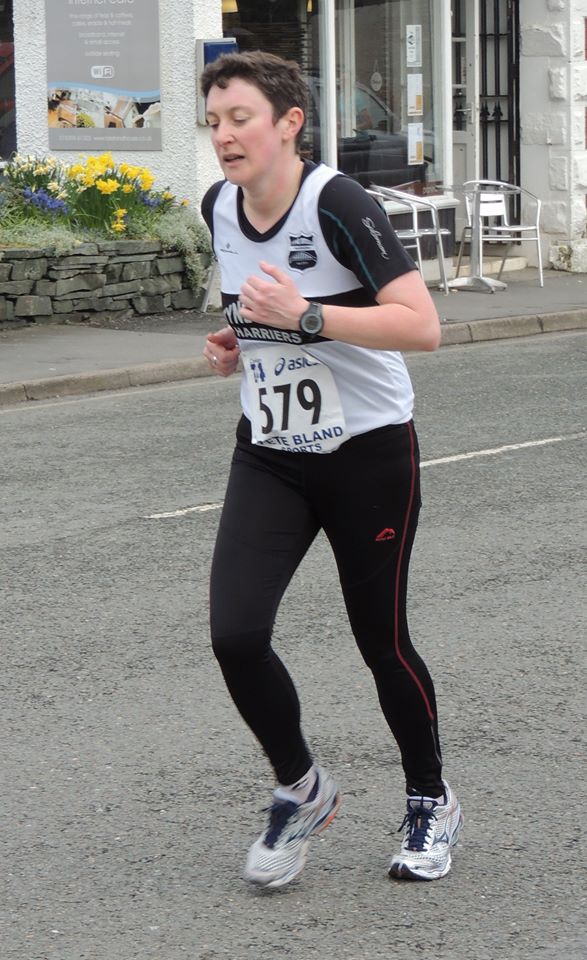 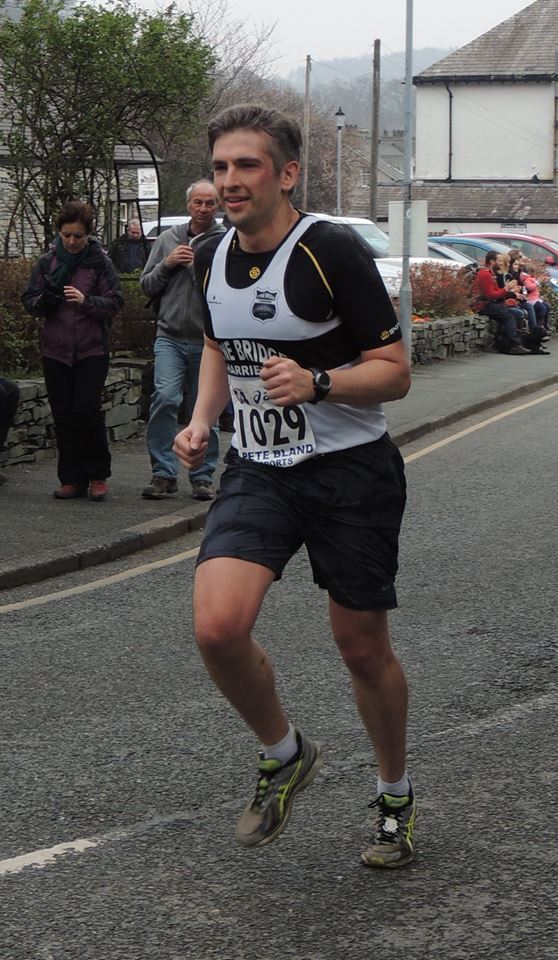 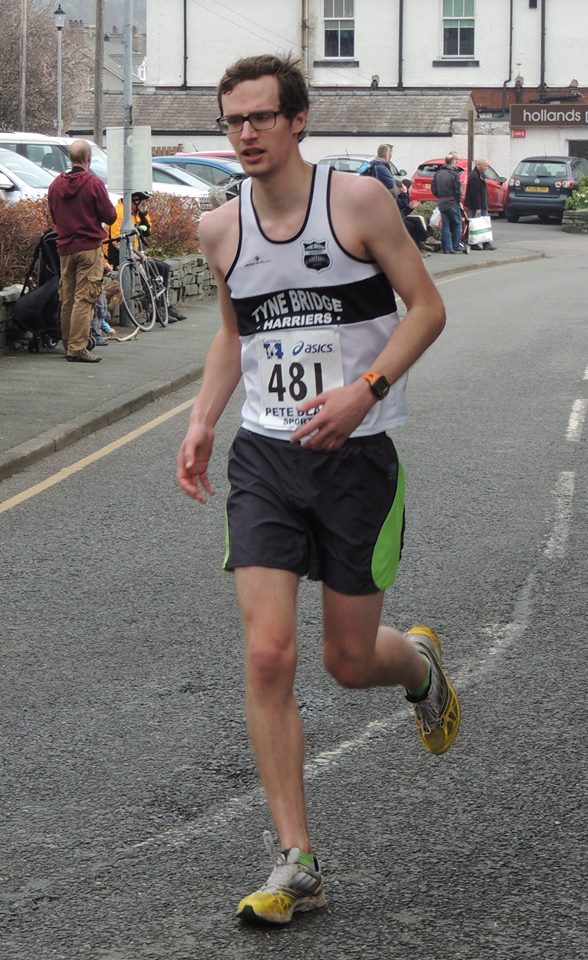 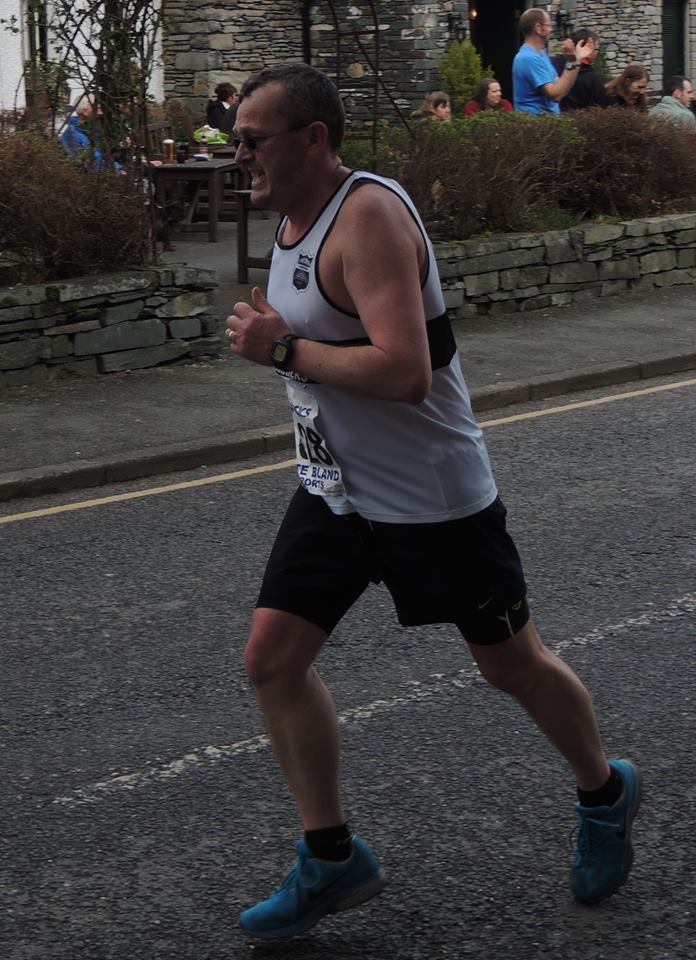 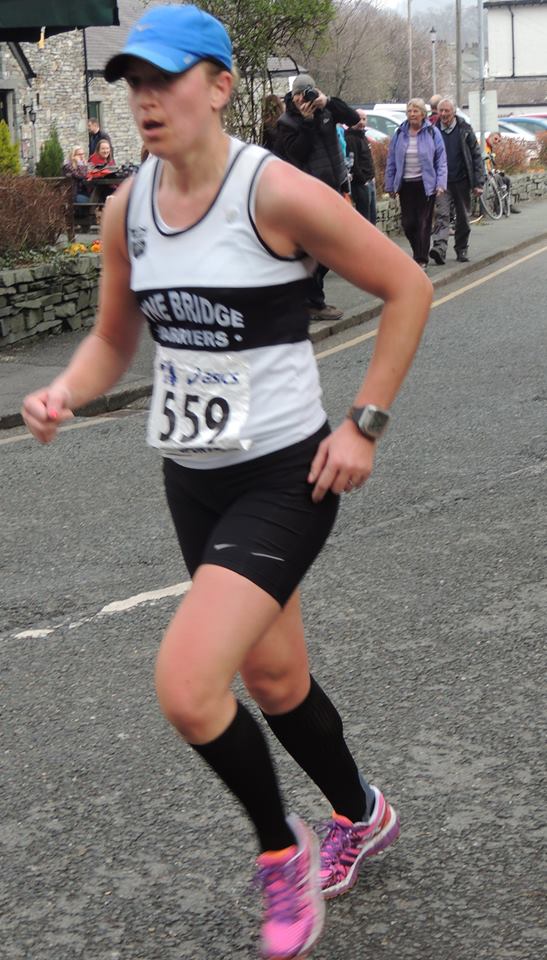 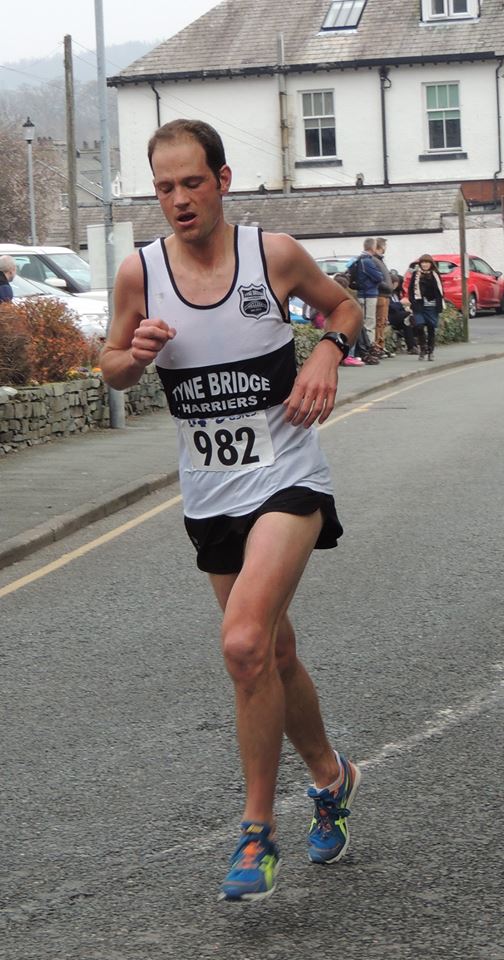 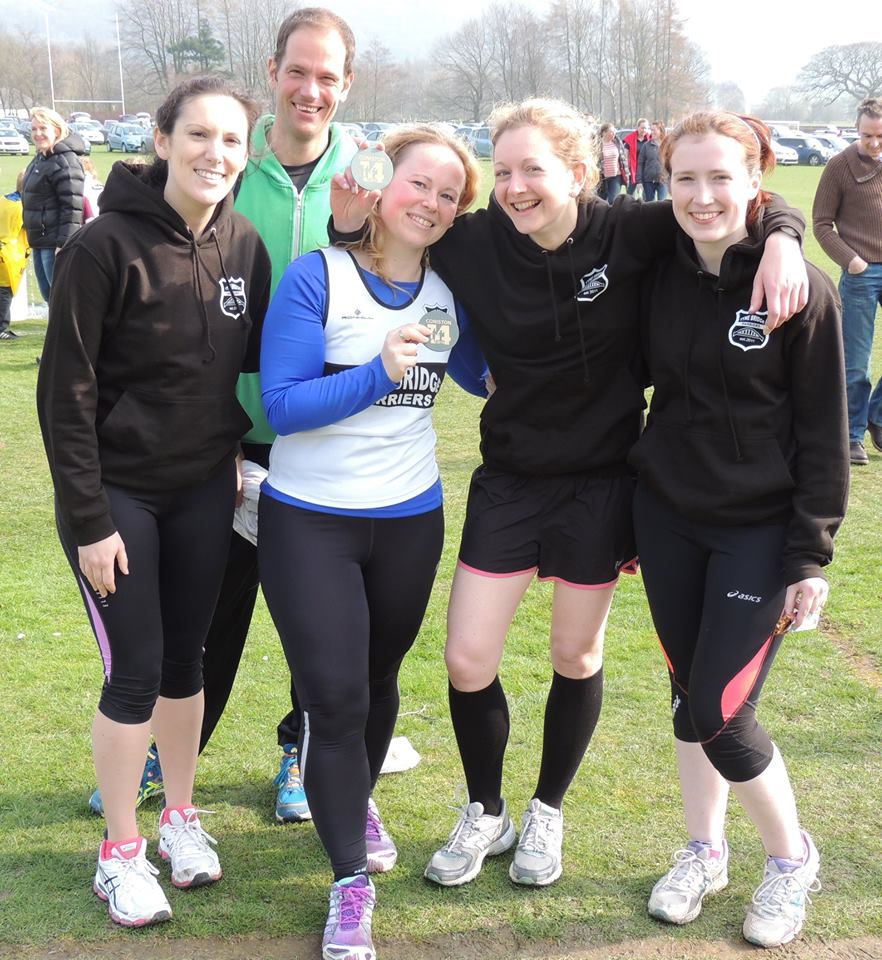