As I’m sure you’re all aware, as I’ve been boring you over the last few months, I have been marking my 50th year by doing fell races on the highest  peaks in the British Isles. Having already done Slieve Donard, Carantouhil, Snowdon and Ben Nevis (highest mountains in Northern Ireland, Irish Republic, Wales and Scotland respectively) Saturday was the turn of the Scafell Pike race. It was also my 50th birthday.

Having travelled over to Keswick the previous afternoon, a 1.00pm start  would mean that I would have plenty of time to travel the short distance to the  start….. or so you would have thought. Although Scafell Pike isn’t too far from Keswick as the crow flies, the race starts from Wasdale Head at the top of Wastwater and this entails a fairly lengthy drive out to the West Cumbrian coast, then along a minor road to the start. Still 45 mins. would seem to be a  reasonable amount of time to allow. An hour into the journey through the  delights of Frizzington and Cleator Moor, I still hadn’t reached the turn off  near Sellafield and was starting to get a tad tetchy with half an hour to go until the start. My nerves were starting to fray as I found myself stuck behind a car, whose driver had obviously been schooled at the Sunday Driving School of  Motoring. He was probably also an in-car hat wearer. A bit of an ‘offroading’  manoeuvre saw me overtake the dawdler and blast on to my destination with minutes to spare.

A feature of this race is that, in addition to the usual categories, they also have prizes for ‘Jack and Jill’ (couples prize) and ‘King and Queen of  the Mountains’ for best aggregate placings in the Snowdon, Ben Nevis and Scafell Pike races. In some of my wilder flights of fantasy, I had speculated on being  the only person to do all 3 and so being crowned king for the day on my 50th  birthday. My dreams came crashing to the ground at the race registration when I added my name to the list of the 10 or so people in contention for this  accolade, most of whom had finished higher than me. I felt it would be somewhat  churlish to request they change the criteria and include the Irish races.

As I lined up with my mate Rick and the 60 or so other starters, a glance upwards indicated that we would be mostly running in cloud as the top half of  England’s highest peak was swathed in a thick blanket of the fluffy stuff. The first 1/2 a mile or so was flat, but an opportunity to get your feet wet as it  involved running through a series of streams. Having crossed over a footbridge,  the climbing started with a diagonal traverse around the foot of Lingmell. At the top of the traverse people started to peel off to the left to take the steep route 1 approach over tussocky ground heading for a stile high above on the  fellside. I managed to overtake a few people approaching the stile, adopting the all fours, snout to the ground approach to ascending. Crossing the stile, I attempted to compose myself for a photographer who popped up before continuing the ascent and trying to keep the runner in front in my sights. As my target disappeared into the clag, I concentrated on trying to follow the stud marks in the ground and had to point out to  a young Howgill runner behind me not to put any faith in my route choice, as I was basically winging it. As the slope  levelled out a bit, we were able to run it a bit more and crossed over Lingmell  Gill. 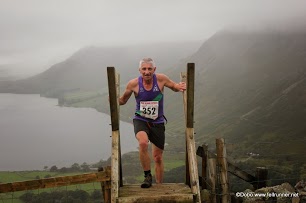 When the going gets tough..(Photo by Paul Dobson)

The going started to get a bit rockier and we speculated that it would be  tricky descending this way as the rock was very wet and treacherous. As we approached a craggy outcrop another Howgill runner appeared from behind us. He had apparently been in 4th place and following the 3rd place runner, who had  missed the right course and had now found himself back in mid pack. As the cloud momentarily lifted, I picked out a few runners ahead, picking their way through  the crags, so followed their line. Despite being steep and slippy, the route to the summit became more obvious, as it was marked with the occasional cairn and  was being followed by hardy groups of walkers clad in all their outdoor kit as  we nipped through them clad in vest and shorts.

At the summit I handed over a numbered disc to a marshal and turned around to descend by the same route. Much concentration was required to negotiate the damp rocky path, as well as trying to avoid taking out groups of walkers. After about 10 minutes descending I started to realise that the path I was on didn’t  look familiar and it wasn’t the same one I had ascended. A quick exchange with a  couple of fellow runners confirmed we had come off route.  A walker coming up the path informed us that loads of runners had just come down this way and that it took us to Wasdale, so we decided to continue by this route. It soon became apparent that we were descending into Lingmell Gill rather than coming off the broad shoulder of Lingmell. 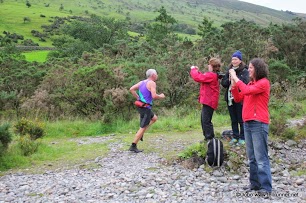 As we dropped out of the cloud and Wastwater came into view I felt relieved that at least I knew I was coming off the right side of the mountain.  I crossed over the Gill onto the other  side of the valley and caught up with a few other runners who had also taken  this route before picking up the traversing path we had ascended by. The final couple of miles were straightforward and the final soggy run in was assisted by  the cheerleading efforts of Vicki, Kate, Clare and Amanda.

Having tucked into some rather fine flapjack, we waited around for the  presentation. The men’s winner in 1.04 was Hunter Bog Trotter’s Murray Strain, who also came away with the King of the Mountains and Jack and Jill awards. Hazel Robinson of Ambleside A.C. was the first lady in 1:16. I was pleased to come away with a prize for finishing 3rd in the V50 category in 1hr 35 minutes which I hope bodes well for my new age group status. 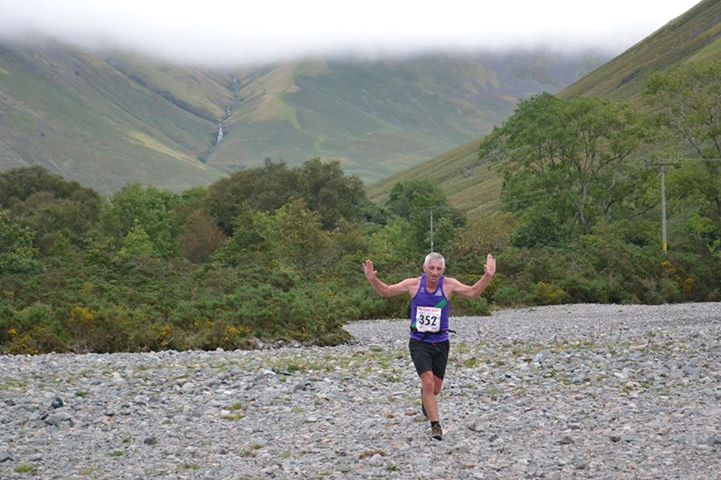 I have really enjoyed taking part in all 5 of the races which I set out to do at the start of the year. I have visited many amazing places as a result of  my challenge and met loads of interesting and inspiring people on my travels and  would definitely recommend the ‘Tollitt’ round to anybody wanting to have a bash at it. I have already started thinking about next year and how I might be able  to plan on doing some races based around a theme. The race against a steam train  in Wales is one that has caught my eye, I know there is a man v. horse race somewhere so there could be the makings of a theme in there somewhere. Another possibility is island races, such as Paps of Jura and Snaefell race on the Isle of Man. Any other suggestions on a postcard please to the usual address.

Permanent link to this article: https://www.tynebridgeharriers.com/2013/09/23/scafell-pike-fell-race-21st-september-2013/