In memory of one of their members, Heaton Harriers annually host a ladies race through Jesmond Dene and this year one of Tyne Bridge’s youngest members, Victoria Waugh, took part and sends in this report.

After turning sixteen a while back, my excuse for not running races had ran out, and yet apart from the Good Friday Relays, the Anita Nott 5K race was my first race being 16. Knowing I was not fit enough to get a good time, I entered out of respect for the late Anita Nott.
The race takes place down in Jesmond Dene, so as you can imagine, it is not exactly a flat run! The atmosphere before the race was buzzing and I must say I was tempted to not run and just enjoy the music that was blasting from the speakers at the start line! There were 11 TBH ladies out (possibly more) and several other members of TBH came and supported.
Just before the race began, there was a minute’s silence in memory of Anita Nott, and although I did not know Anita, I found it very touching.
The whistle blew and the ladies were off! If you didn’t already know, my mam is the ladies’ club captain (Denise Waugh) and we decided before the race, that we would run together and pace each other around the course in order to finish our first 5K race in months.
At around the 1.5 mile mark there was that dreaded hill that appears at the end of the club’s Summer Grand Prix. Hills are normally my strong point, so I ended up driving up the hill and leaving my mam the job of having to catch up! The second mile seemed like the longest mile ever and this was then followed by the big hill in Heaton Park at which by this point, my mam had caught up to me again. As we approached the end of the race, my mam and I decided to run across the line holding hands… That was until I wanted to beat her so let go of her hand and sprinted ahead just before crossing the line!
I ended up with a time of 26:04, which I am pleased about considering it was not an easy course and I have just started proper training again after months out.
I would like to thank Heaton Harriers for the fantastic race and atmosphere and also the people who came along and supported. I would strongly recommend this race and would love to see as many ladies participating in the race as possible next year as it is fun, friendly and remembers Anita Nott. 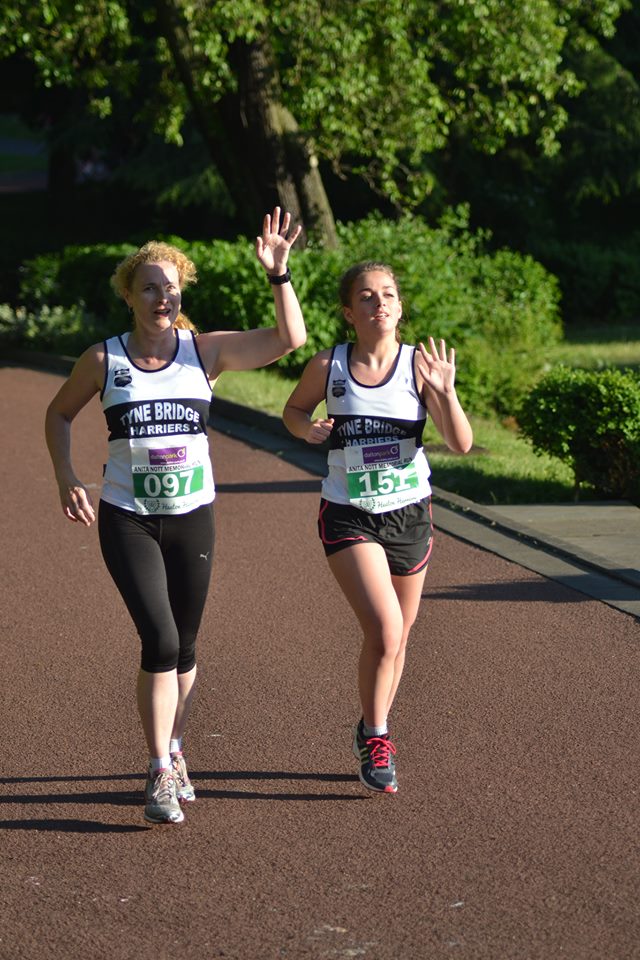 Permanent link to this article: https://www.tynebridgeharriers.com/2013/07/02/anita-nott-jesmond-dene-race-1st-july-2013/