Fresh from a successful midweek outing round the Northumberland coal-pits Mark Reynolds sends in this report.

Race instructions arrived advising us to report to the Woodhorn visitor centre just outside Ashington.  For nearly 100 years Woodhorn was a pit close to “the world’s largest coal-mining village” and the homes of illustrious sporting legends Jackie Milburn and Charltons Jack and Sir Bobby.  Once the 600,000 tonnes of coal had been shifted out of the way the site was made a Scheduled Ancient Monument and everything was in place for the night’s race.

Uniquely we were instructed to bring photo ID to collect our number and chip on the evening.  Once I’d convinced the marshals I wasn’t Keith Rooney in disguise I quickly registered and milled about in the sun.  I spotted TBH trio Aimee Cook, Shaun Brown and new member Matt Brent on his first outing in the iconic black and white.  We chatted and Shaun and Matt established their credentials for quick times, both looking to go close to 35 mins.  After a brief briefing we lined up under the heckles of local youth (who may have been better off down the pit than above it) with Shaun and Matt on the front row.  Weather conditions were excellent with bright sunshine, low humidity and the mercury only tipping 12C.  Fortunately the organisers had arranged for the gigantic fans around the course to be turned off, otherwise it would have been blowing a gale.

The hooter hooted and we were off – everyone galloping off far too fast as usual – after 5.30 min pace for ¼ mile I saw sense and slowed back a bit allowing the headless chickens to dash ahead.  I also saw a poor Alnwick Harrier blocked by a chap with headphones on the narrow initial path who had no idea of the traffic jam he’d caused – oh well.

The route was all off-road along paths and trails around the Woodhorn site.  After a mile or so we hit the first lap of a pleasant loop through a wooded area, the course being well marshalled and signed throughout.  The terrain gently rose and fell underfoot and I was feeling pretty good.  Splitting 20.21 for 5km I began to pick off those reckless enough to charge off at the start, satisfyingly passing the young Alnwick Harrier that had beaten me in the final 1000m at Alnwick last week.

We came off the second loop and now headed back to the start by a different route circling the lakes made from the flooded pit beneath our feet.  It was at this point the race began to feel L-O-N-G.  The field had thinned out and I was pacing a South Shields Harrier ahead who I couldn’t haul in.  The friendly support dotted around the park kept me going as we entered the final furlong, or so I thought.  One of the friendly Dave’s from Alnwick Harriers (seriously, they were ALL OVER this race) had warned me at the start that the route was a generous 10.4 km.  Rumours afterwards that runners were being made to do extra as penance for the Marathon of the North were unconfirmed at the time of writing.  So 10km came and went and we carried on running with the finish line nowhere to be seen.  Finally heading across the grass and down a tree lined avenue we turned a sharp left to the finish line.  Finishing in 42.58 for 30th I’d felt pretty slow on the last stretch.

Here I found that Shaun had finished an excellent 5th, pipped on the final straight by a Heaton Harrier.  New boy Matt though has set out his stall with a superb 3rd place finish behind young Isaac Dunn of Blackhill Bounders and ex-TBH Rob De’Giovanni running for Gateshead, a mere 24 seconds covering the first five.  Aimee finished 8th Senior Lady in just over 50 mins.

The general agreement was that the course was about 400m long, but no one seemed too dischuffed.  A good number stuck around for the presentations with Matt taking the silverware for TBH.  We made Rob De’G take the photos as his punishment for apostasy and headed home. 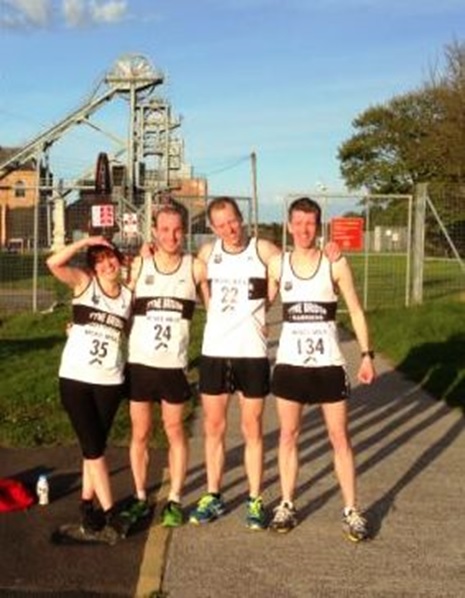 Overall a good event and for the price and location worth a look next time, so long as the course goes on a diet.  Thanks to VO2 Max and all the marshals for a good night and good luck for the remaining triathlons of the season.

Full race results here – [as the race was run under an ARC (Association of Running Clubs) permit rather than UK Athletics I don’t think they’ll appear on P of 10.]