A very special well done to the 7 Tyne Bridge members who travelled to Knowsley Park, Liverpool, on Saturday to take part in this year’s Northern Cross Country Championships.

The recent poor weather meant the decision to hold the race wasn’t actually confirmed until the early hours of Saturday morning, which no doubt contributed to the relatively poor turn-out of athletes for the event.

A bright and early start was order of the day when Tony Carter, Sinead Coffey, Julie Shaw, Steph Mcfarlane and myself boarded the bus at Blue Flames for a 7.30 departure where we were made very welcome by our hosts Heaton Harriers. A quick call to Paul Hilton to confirm all TBH members travelling were present and we were on our way to Knowsley Safari Park  just outside Liverpool where we would meet up with Paul and Kev Jeffress.

On arrival at the Park we headed to the nearest cafe for a hot drink and were having the usual discussions ahead of the race [how many hills, how steep would they be etc] when I pointed out no matter what, we were flying the TBH flag today, to which a reply came more like dragging it [not sure who it was but it was not said in a Geordie accent].
While waiting for Paul and Kev to arrive we decided to take matters into our own hands and headed off to the registration area to collect our race numbers. The first shock of the day awaited us we were informed no TBH ladies team had been entered with the registration official confirming “look, your not even in the programme” [cheers pet]. After a bit of detective work by TC it became apparent  TBH ladies had been registered as men! After convincing the officials our ladies were definitely women and not blokes they were switched back to their appropriate race and we headed off to the course where we met up with PH and KJ and decided to have a walk around the course to see what lay ahead of us.  The course itself was a huge loop of the park approx 4k long with 4 long uphill climbs, the ladies doing 2 laps [8k]  and the men doing 3 [12k]
The start line was at the bottom of the 1st hill which was covered in about 1 foot of snow, I thought to myself  “ah not too bad” but once we got to the top it became clear to us that after the earlier races the snow had become a mixture of slush and mud so seeing a 4 wheel drive emergency vehicle stuck was not at all encouraging
The ladies race was now only 20 mins away so we headed back to the start. Once the race was underway we made our way to the top of the 2nd hill to give the TBH girls some vocal support and encouragement , they soon appeared [approx 2k into the loop]  following one another in the single file track that had been formed . It looked really tough and I remember saying to KJ  “I hope it is not as bad as it looks” and him replying “It will be OK man when you get going”.
It was soon time for the men to be underway and I think I got round the 1st lap at around 24mins, the 2nd lap was really tough and I thought about throwing the towel in.  However I kept plugging away and somehow completed the course and will openly admit on the final lap I was down to walking pace at times on those hills. One thing for sure I knew I wasn’t going to make the mistake I made at Durham and I virtually got an escort  from the marshal into the finishing lane.
The general opinion of many runners was that the conditions were the worst they had run in and we all  know what your going to get from runners with the ability of Paul, Tony and Kev  but those three girls [who were nearly blokes] should be proud of themselves on completing the course in such atrocious conditions. You may have dragged yourselves around just as I did but you certainly did not drag the flag round [SINEAD]
WELL DONE EVERYONE 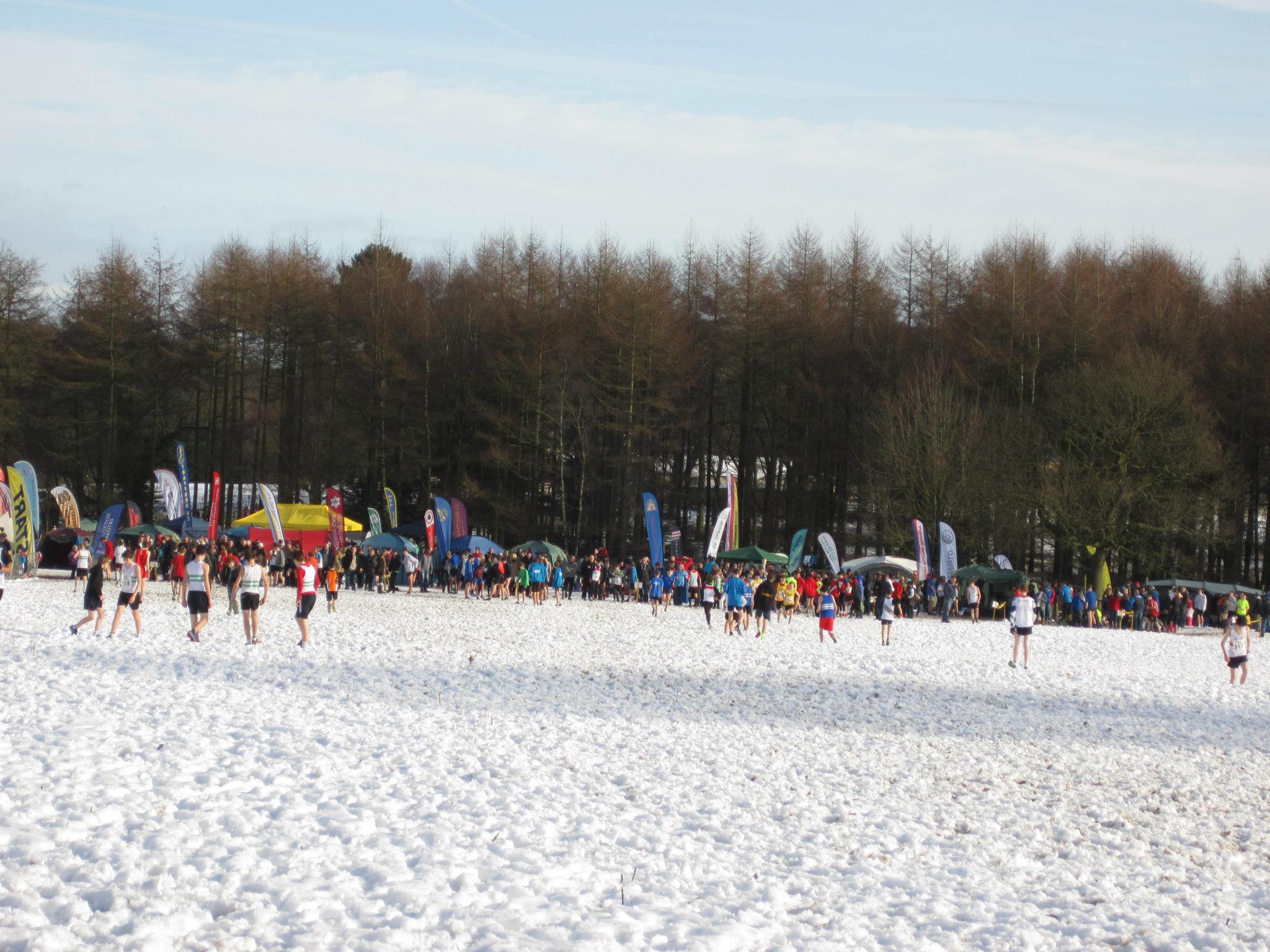 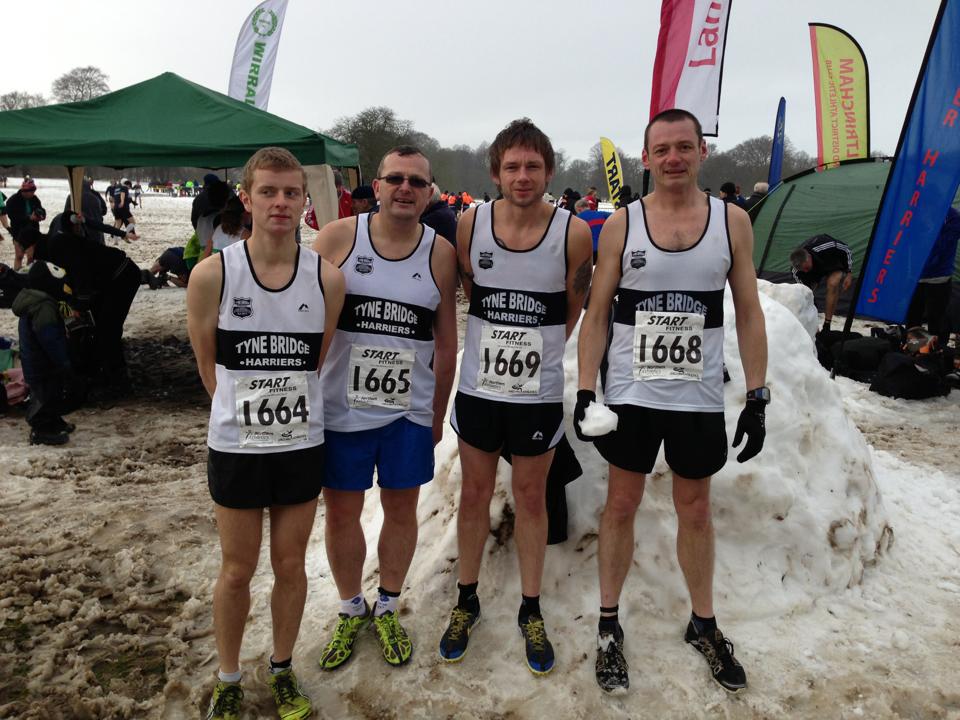 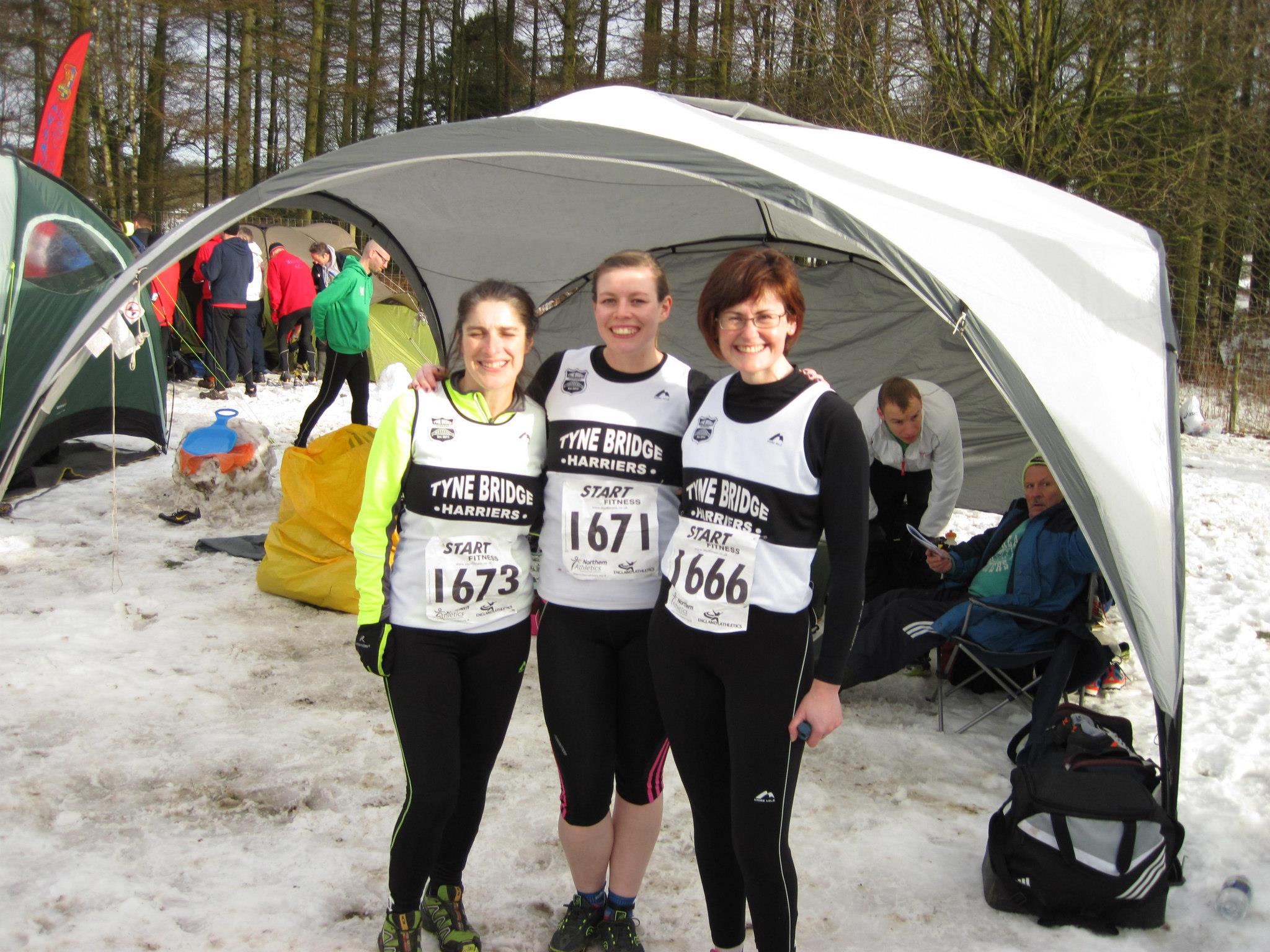 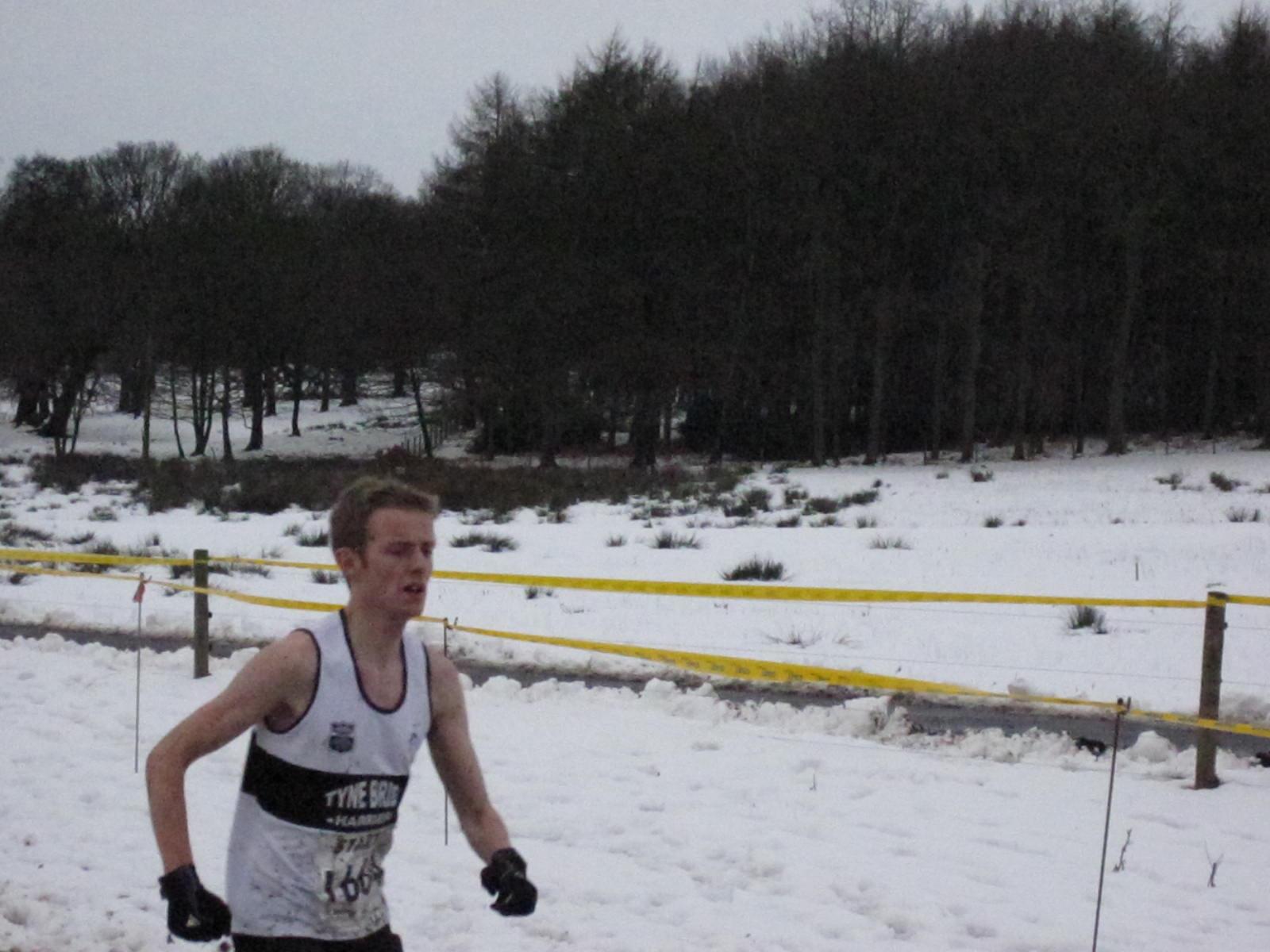 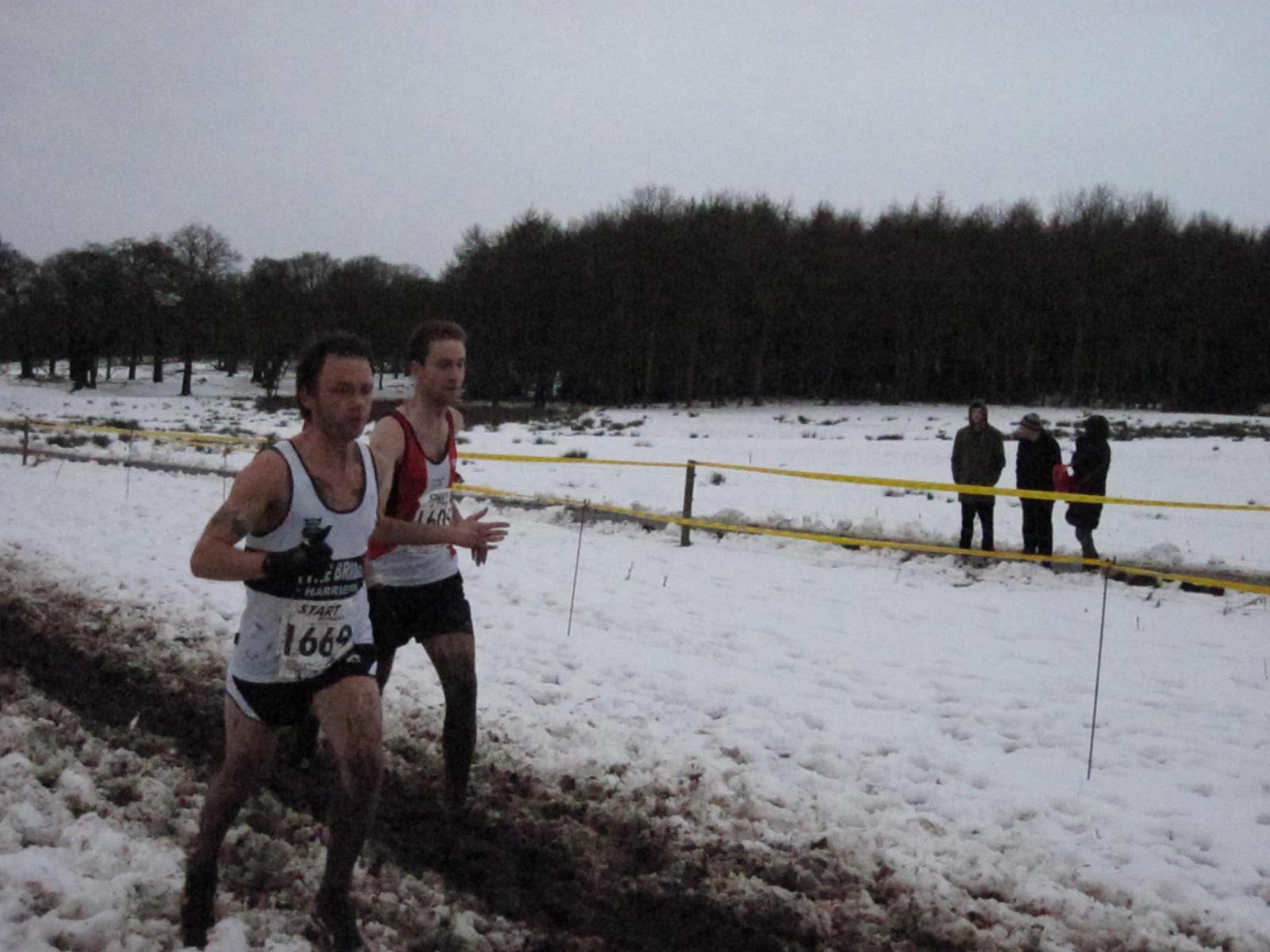 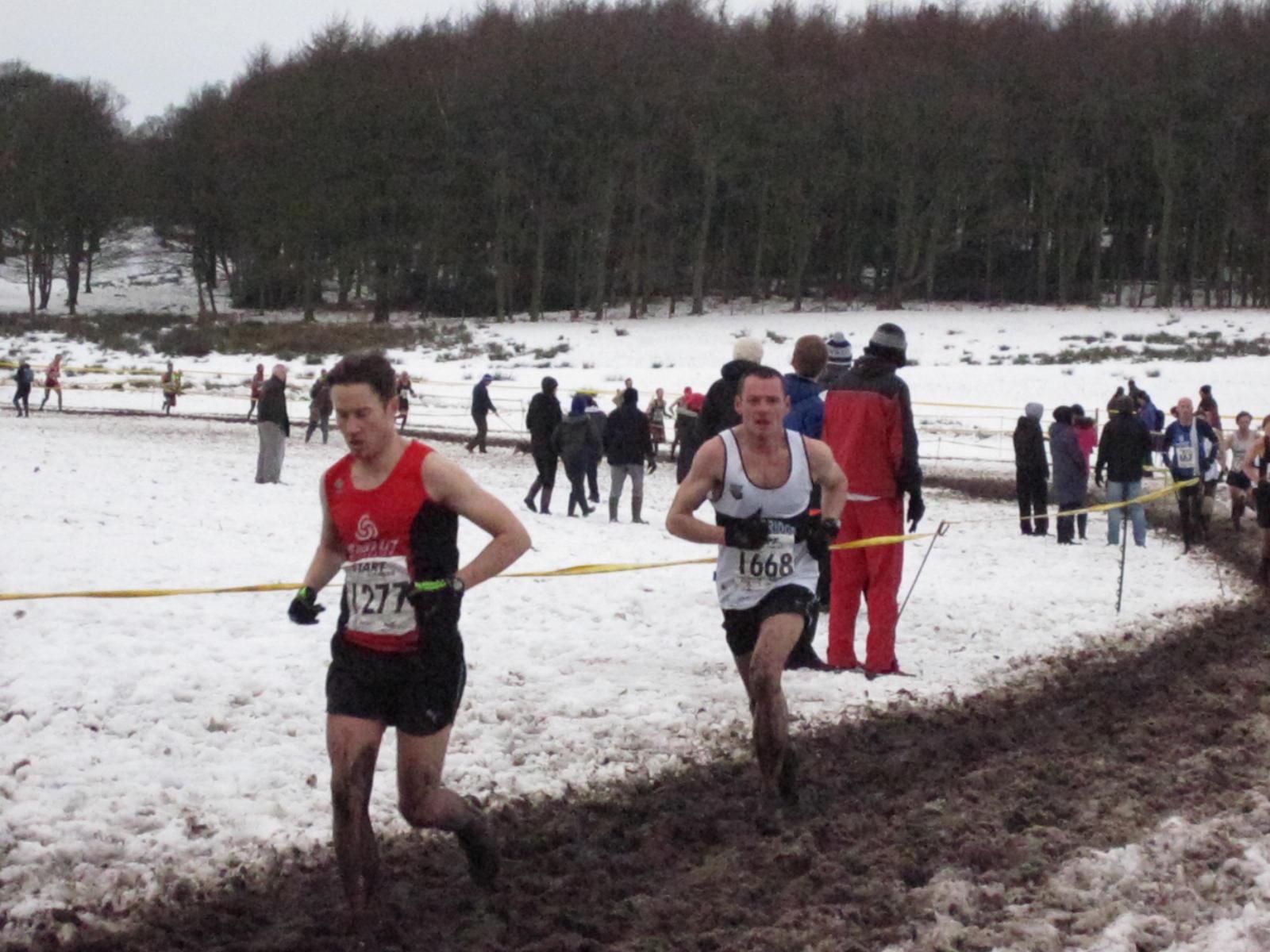 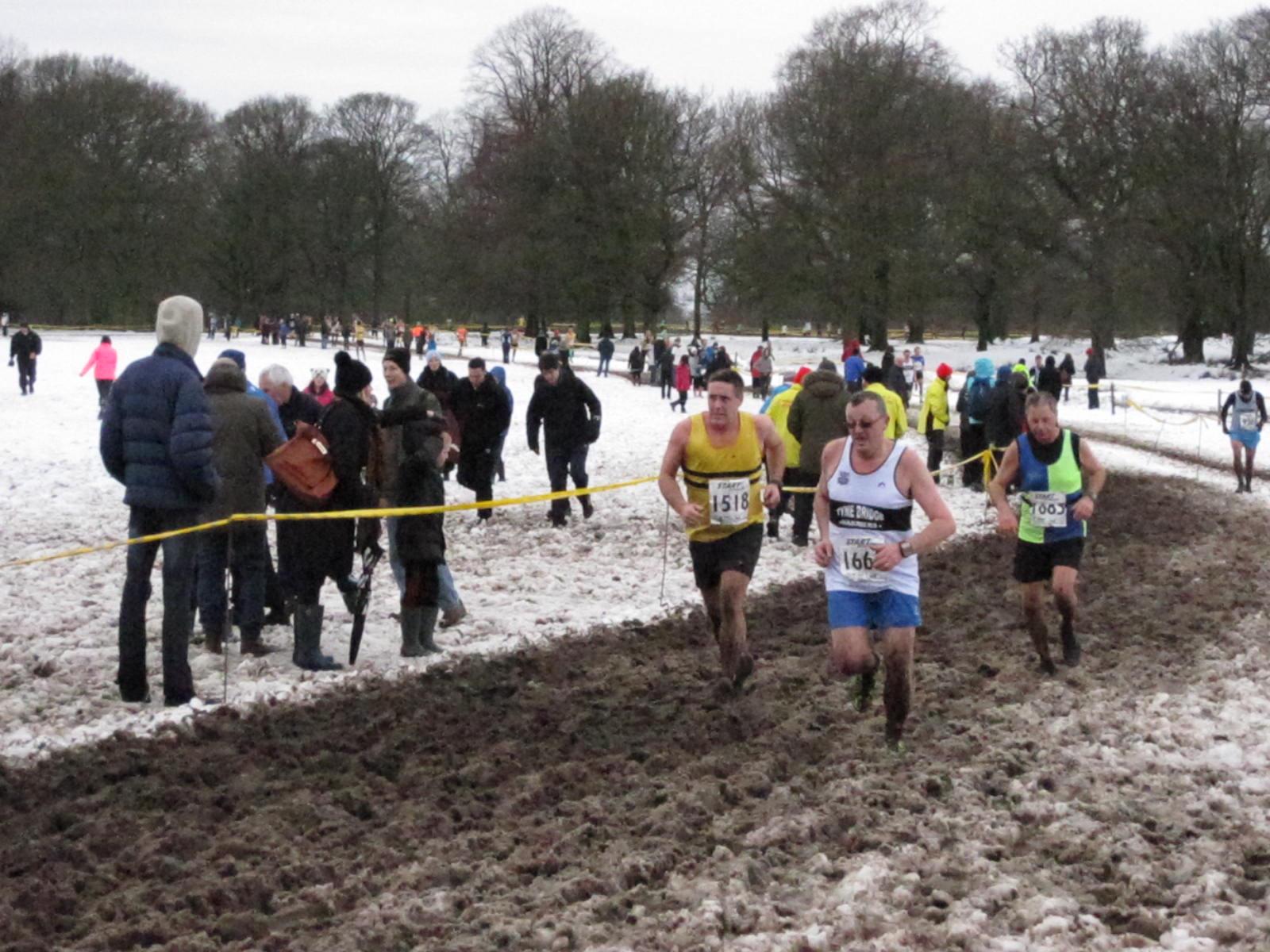 Kevin Cheetham getting stuck in

Permanent link to this article: https://www.tynebridgeharriers.com/2013/01/28/northern-cross-country-championships-26th-january-2013/