Simon Kristiansen smiles his way through another report on a fantastic day for TBH.

TBH were once again in force with athletes keen on achieving fast times, albeit displaying usual prominent beams of joy. The start line atmosphere was strangely quiet and airy with anticipation like time had stood still. It was at this stage Keith Rooney reminded me about a pre-game ritual we have in New Zealand called the Haka. My mind started wandering off on a tangent as I was thinking of a suitable Tyne Bridge pre-race-war dance that we could lay down before every race until BANG! Off we went!

There were rumours of a fast start. However, this was put to bed following a cautious and somewhat lazy 4:54 first mile! There were some fine performances around the three laps of the inner ring of the Newcastle horse race track. Paul Hilton’s was particularly noteworthy, as he managed to knock over a minute off his PB on the back of a 10-mile run on Friday, finishing in a time of 27.51.

Fastest Tyne Bridge man Sparrow narrowly missed going under the official 26 minute mark while smashing his 5-mile PB coming, in 3rd   with his golden locks flowing in his wake. Sophie Wardrobe made her club debut in the now famous black and white vest, and Sophie Marr backed up her last weekend’s run as the fastest Tyne Bridge female home in a fine time of 32:09.

Tactics within the men’s team involved Rob and Sparrow aiming for consistent splits with Simon providing communication between the two by going backwards and forwards in the field. While not necessarily intentional, this tactic helped the club to continue the winning tradition started by messers MacPherson, Morley and the Nessonator for the second year running.

Los Angeles 10,000m silver medalist Mike McLeod was on hand to present place getter $$$s. Not one to miss an opportunity and lured in by his championship aura, I whispered softly in his ear for an autograph post prize giving, and the great man kindly obliged. This will be offered as a raffle prize at the much-anticipated Christmas party!

Credit must go to the support unit both sideline and online for yet another dominating performance from the brightest club in the northeast. 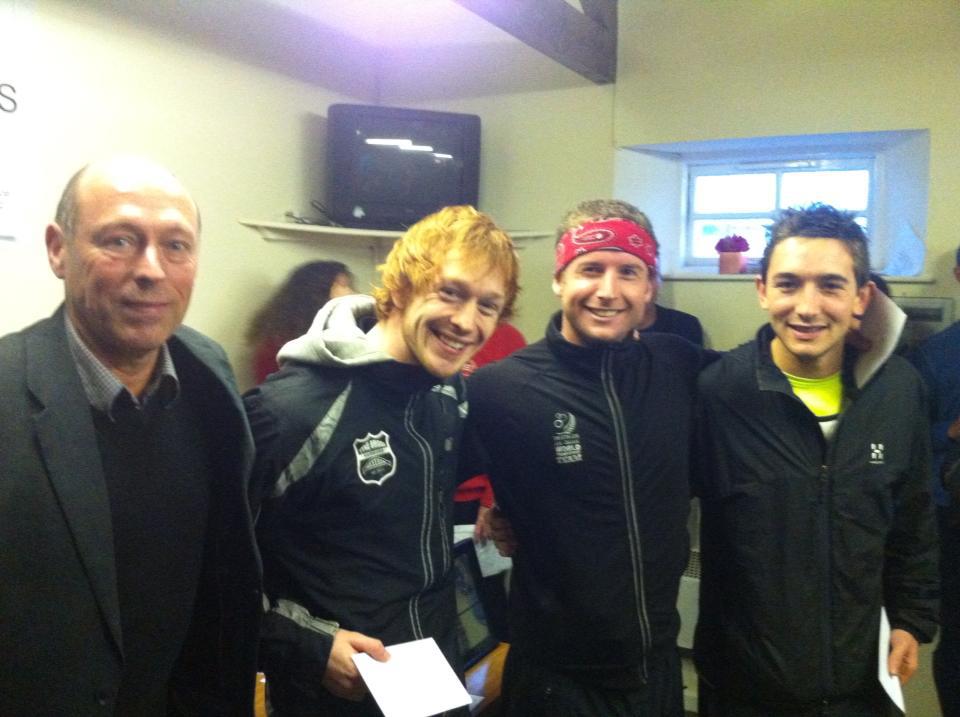 Permanent link to this article: https://www.tynebridgeharriers.com/2012/11/25/norman-woodcock-memorial-5mile-race-24th-november/